During the weekend of September 13 through 15, Théâtre du Châtelet will reopen its spaces to the public after a 30-month renovation. Giant marionettes from Mozambique accompanied by dozens of drummers will greet people on the Parvis of Hôtel de Ville, perform a short sketch, then join a Jean Cocteau-inspired machine designed by Francis O’Connor in leading a march to the theater, where participants will be invited to explore transformed spaces. These events– including a 15-minute performance of the Marionettes accompanied by amateur drummers, the march with the strange machine and the marionettes, and the activities in the theater– are free and open to the public. As a bonus, 20-minute workshops on circus arts for 20 to 40 children (5 years and older) will be led by l’Académie Fratellini prior to the official gathering times.

Afternoons: Saturday, September 14 and Sunday, September 15 – Gather at Hotel de Ville at 12:45 PM, parade to theater with surprises along the way at 1:00 PM, then engage in activities in the renovated spaces 1:30 PM to 3:00 PM. Note that the Saturday afternoon parade might be canceled because of les gilets jaunes.

Performances in the main theater, requiring tickets, will take place throughout the weekend, evenings at 8PM and in matinées on Saturday and Sunday at 3PM. They are inspired by the original “Parade”, an iconic ballet conceived by Jean Cocteau that used common everyday sounds like sirens, typewriters, foghorns and pistol shots instead of speeches; featured designs by Pablo Picasso (curtain, costumes and stage set); all accompanied by music composed by Erik Satie. This revolutionary presentation of visual arts, innovative dance, feats often seen only at the circus, and music enriched by unusual sounds and instruments, was the first venture of its kind for its creators in 1917, as well as their first collaboration. The piece, rich with street scenes, shows circus performers inviting people to come into the theater to enjoy their performance. It premiered at Châtelet on May 18, 1917, with choreography by Léonide Massine, and dancers from the Ballet Russe under the direction of Sergei Diaghilev. The production was so out of the ordinary that it inspired Guillaume Apollinaire to create the term “surrealistic” in his program notes, a concept that became widely adopted by the art world three years later. 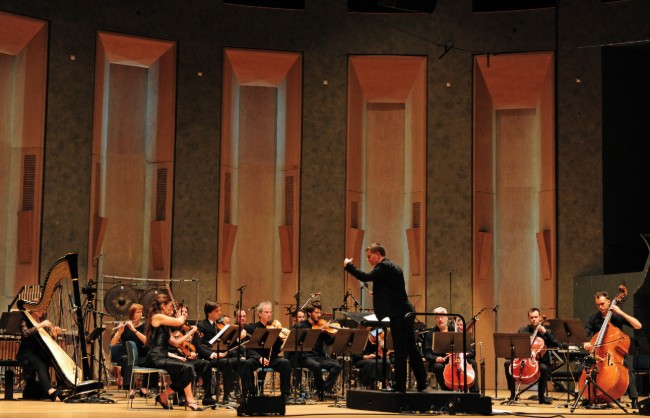 This piece, a complex production, delighted audiences of all ages. Its namesake today, with direction by Martin Duncan, music composed by Matthias Pinscher, sets and costumes by Francis O’Connor, lighting by Sinéad McKenna, performances by Stéphane Ricordel’s Boite Noire (music by the incomparable Dakha-Brakha), Elizabeth Streb’s Extreme Action (accompanied by a Pierre-Yves Macé composition played by the Ensemble Intercomtemporain with Matthias Pintscher directing), complete with a sliding scale for tickets that begins at 10 euros, promises to do likewise.

The program seems an inspired choice for Théâtre du Châtelet, known historically for offering the avant-garde, as it ushers in a new era of entertainment for today’s theater-going public. The spectacle, which originally built on the tradition of “féeries”– productions rich in staging, visual surprises and magical transformations– lends itself to contemporary interpretation. The performers this September offer unique talents adapted to the modern age. How they will use the 21st century expanded capacities of the theater is yet to be seen! 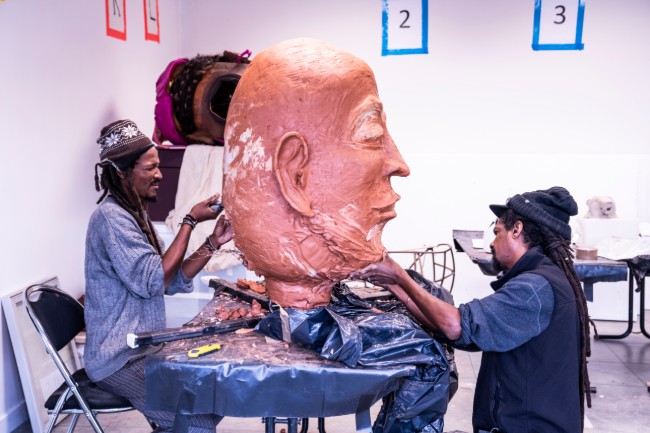 Wearing both my hats – the psychologist who embraces the value of play and the dedicated Francophile – I look forward to joining the festivities and then sharing reflections with Bonjour Paris readers on ways in which participants engage with the opportunities to celebrate that Théâtre du Châtelet is offering. The re-opening of the theater intrigues me because it incorporates so much that I see as the best that Paris has to offer: Respect for history; a willingness to transform with an eye to the future; appreciation for whimsy, unique combinations, and the importance of play; embracing creativity and a diversity of perspectives; acknowledging the importance of pleasure; recognizing that learning occurs in multiple ways and aggregates over time; and an understanding that props and places create the context where our learning takes place. Let’s review how each of these dimensions plays out through the Théâtre du Châtelet’s re-opening events. 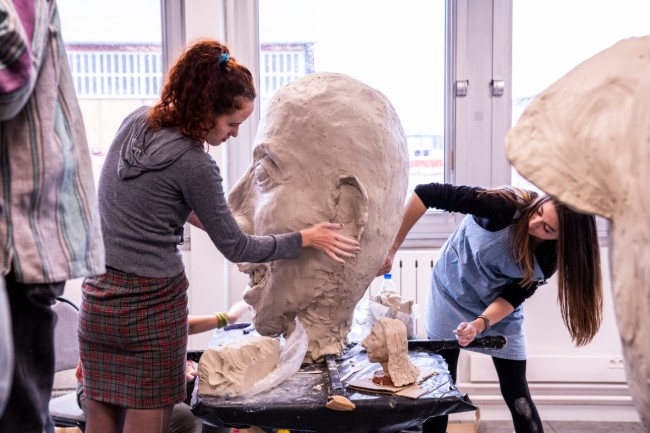 Respect for history. Three ingredients of the reopening pop out as particularly respectful of Parisian history. First, Théâtre du Châtelet was originally built between 1860 and 1862. Baron von Haussmann commissioned Gabriel Davioud to create a theater that could accommodate Hippolyte Holstein’s equestrian company, the Théâtre Imperial du Cirque, after he decided to raze its home, the Cirque Olympique on bd du Temple, so that what is now bd Voltaire could be constructed. From the beginning, Théâtre du Châtelet was designed to accommodate large productions with innovative staging.

Second, the idea of a parade leading into a new theater mirrors another historic event. When Le Chat Noir, perhaps the first Parisian cabaret, outgrew its tiny Montmartre home, customers in costumes marched from the cheap rental on bd de Rochechouart to a much larger space at 12 rue Victor-Massé. The parade from Hôtel de Ville to Théâtre du Châtelet honors this historic event. It also continues the Châtelet tradition of offering the public events “hors des murs”, outside of the walls.

Third, Théâtre du Châtelet has always honored the mission of bringing excellence in the arts to as broad a population as possible. That value remains very much in place under the new stewardship of Thomas Lauriot Dit Prévost (General Director) and Ruth Mackenzie (Artistic Director).

Willingness to transform with an eye to the future. Théâtre du Châtelet has been associated with the cutting edge of the arts since its beginnings. By bringing the spaces into modern times (although we will not see how they have done it until the reopening – stay tuned!) the institution honors tradition, retains the façade, and transforms what needs to be updated to current standards. I expect emphasis on technological innovation, sustainability and accessibility. These are strong French values that permeate contemporary architectural design. 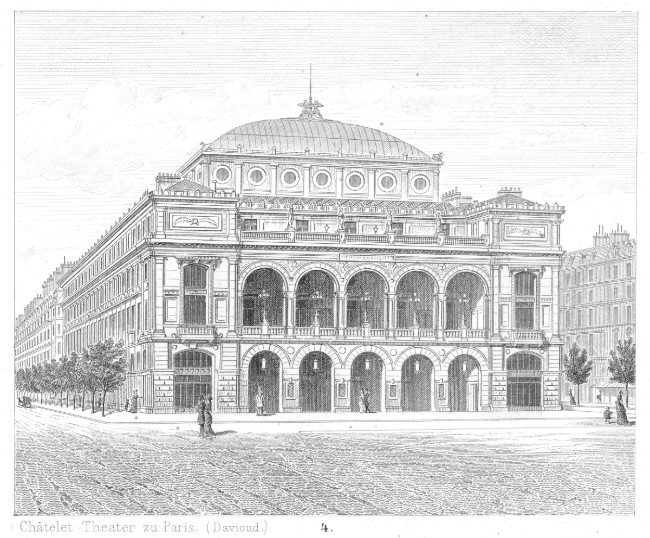 Appreciation for whimsy and unique combinations, the importance of play. The theater has always been willing to engage in creative explorations. The whimsy of a production like the 1917 “Parade” bears witness to a commitment to innovation and new combinations. In order to educate the next generation of theater-goers, today’s staff of Châtelet has hosted ateliers for the past year to introduce children to circus arts, marionette-making, percussion, and design.

Beginning in August of 2018, free workshops for children were organized. First Elizabeth Streb, with her troupe of “extreme acrobats”, addressed gatherings at Paris Plages and the Bassin de la Villette. In October of 2018, she joined with Stéphane Ricordel, head of “Boîte Noire”, another circus company, in offering “Picasso Circus” in the nave of the Musée d’Orsay. This venture was supported by Musée d’Orsay and Musée Picasso along with Théâtre du Châtelet, in a collaboration reminiscent of those supported by the theater from its beginnings. In March of 2019, the artists of Maputo, the capital of Mozambique, joined Parisian art students in making giant marionettes as well as training music students in percussion to accompany them. Workshops this August expanded Elizabeth Streb’s initiatives of the previous summer. During the upcoming gatherings on the Parvis at Hôtel de Ville, Académie Fratellini will offer additional workshops in circus arts to small groups of children, prior to the march to the theater. 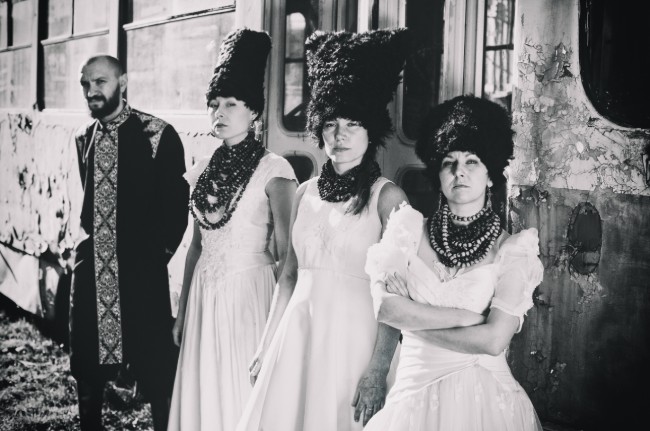 By using the gigantic marionettes inspired by the Mozambique artisans to lead the parade to the theater and having amateur drummers accompany them, playfulness is endorsed through example. The Jean Cocteau-inspired Machine, leading the entourage, adds a major note of whimsy.

Embracing creativity and diverse perspectives. Celebration events reach well beyond the local and familiar. The Mozambique marionette team; the extraordinary Ukrainian quartet Dakha-Brakha, famous for reinterpreting traditional folk music by adding modern sounds; the renowned British stage manager, writer and director Martin Duncan, known for his ease in moving from opera to popular culture; the eccentric world of Erik Satie brought to life through decoration in the halls of the theater; costume and set design by British Francis O’Connor; magic created by Irish lighting expert Sinéad McKenna; the unique work of Brooklyn’s Elizabeth Streb and her performers; a commissioned score by Pierre-Yves Macé and brought to life by German conductor and composer, Matthias Pintscher, directing the Ensemble Intercontemporain – all contribute to a global perspective and an experience that expands our appreciation for cultural differences.

Acknowledging the importance of pleasure. Throughout, the opening events at Théâtre du Châtelet are designed to bring pleasure through familiar and novel visual delights, sounds that intrigue and provoke, and a tactile experience that makes us yearn to touch the marionettes, the costumes, perhaps each other. Older generations and the newer ones will be exposed to new pleasures and opportunities to embrace them.

Recognizing that learning occurs in multiple ways and aggregates over time. Forms of art and entertainment evolve over time and our sensibilities need to attune to changes. By constructing the re-opening program as they have, the people in charge at Châtelet have shown themselves to be exquisitely sensitive to evolution. The workshops for children, the involvement of the public in opening events, exposure to elements of the new theater while the internal work has been evolving, all reflect this awareness. When “Parade” debuted in 1917, it was considered almost as revolutionary as Stravinsky’s “Rites of Spring”. Indeed, some press reviews considered it more so and described riots in the audience. With this September’s gentler introduction to music, art, decoration, composition and staging that might otherwise shock us by its departure from the familiar, we are being guided into a new world, one that respects the past but sits squarely on the shoulders of the future.

Understanding that props and places form the foundation in which experience takes place. Events framing the reopening of Théâtre du Châtelet brilliantly underscore the material basis of our experience, that which evokes our positive emotions of surprise, delight, curiosity, recognition, and which creates within us a sense of culture and an appreciation of art that go beyond the material. Our awe at the events of the weekend may well bring a profound appreciation of the capacity for inspired expression that belongs uniquely to people.

I look forward to describing my own discoveries and hopefully those of others after I experience the events of this weekend’s opening celebrations in person. 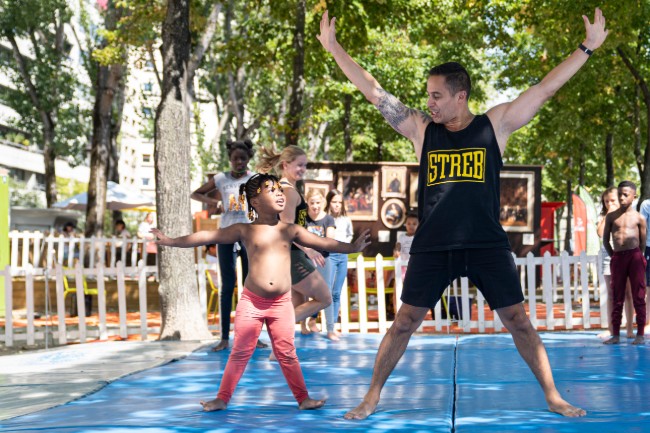