Home Lifestyle The Tower of Babel – How the French Learned to Speak French... 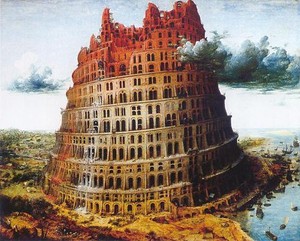 I have some French friends whom I refer to as the linguist police.  They never miss an opportunity to correct my pronunciation of their language nor my grammatical errors, often with a wagging finger and a stern reproach. It wasn’t until I began to read, Robb Graham’s The Discovery of France, one of the most wonderful historical, geographical and anecdotal accounts of France from the Revolution to the first World War, that I began to understand the pathology of their lingua franca.

The story of Genesis could not have described the “confusion of tongues” more aptly than Graham’s.  Before Julius Caesar vanquished France around 58 BC, most of the country was inhabited by Celtic speaking people the Romans called Gauls. The south of France was home to over 250 ethnic languages.  Latin was only spoken by the urban aristocracy for official business, commerce and education, while the countryside remained steeped in a mélange of incomprehensible patois.  Then the Franks invaded in the 3rd century and made Paris their capital.  The Franks (meaning brave and free) gave France its name, Franko, which became Francia when clerics re-latinized old French during the middle ages codifying common nouns, verbs, adjectives, articles and prepositions. They also brought a Germanic interpretation  to the language  which created a seemingly arbitrary dividing line in the country: north of the line people spoke langue d’oil, south of the line, people spoke langue d’oc, though still dialectical in nature incorporating English, German, Dutch, Danish, Norweigian, Swedish, Celtic, Welsh, Scots Gaelic, Irish and Breton in the north and Iberian, Ligurian, Provençal, Vasconian, Aquitanian, and Basque in the south. 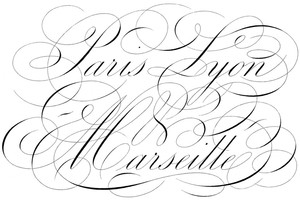 Over the next 400 years different words were added to the French lexicon.  For instance, the Scandinavians added seafaring words, the Dutch added nautical terms and trade vocabulary and the Arabic world added terms for luxury goods: elixir, alcool (alcohol), bougie (candle), coton (cotton) and scientific terms such as algebra and alchemy, etcetera.  From 1100 on the Kings of France held court in Paris, even then considered the capital of the French Empire and the most beautiful city in the world.  In 1539, King Francis I made French the official language of diplomacy, the courts, the arts and literature.  In 1634, Cardinal Richelieu established the Académie française which fostered a goal of preservation and purification of what became classical French, however, what we consider the modern French language of today was only spoken by educated people, either in and around Paris or in other countries by royalty, most notably Frederick of Prussia and Catherine the Great of Russia.

After the French Revolution in 1789, Napoléon began the monumental consolidation and unification of the French people.  Not only did he create a new calendar and divide the country into administrative départments, he understood the essential concept that a common language was absolutely necessary for the survival of the nation.  In a survey undertaken by Abbé Henri Grégoire, it was discovered that in 1790 only 50% of the people spoke what was considered Parisian “French” while over 6 million people In the north and south of the country neither spoke, wrote nor understood French at all, (55 dialects and hundreds of sub dialects were identified in Grégoire’s research).  Due to conflicts between the radical secular state and the catholic church, France failed miserably in creating a common language until the 1880’s when compulsory primary education was instituted.

Robb concludes that one of the greatest social forces in the formation of modern France was the process of “forgetting where you were from and what language you spoke.”  Peasant children were thrashed, mocked and humiliated into submission.  Not speaking your familial patois became, de rigeur, required.

As a result an attitude of superiority toward grammar and vocabulary developed which is still in evidence today, hence the ruler on the back of the hands approach some French people still take towards foreigners bastardizing their language.  Globalization and its subsequent homogenization of just about everything has spawned a back to our roots movement to keep ones regional dialect alive.  In my little village in southern France, where I am one of 39 residents, there are Occitan language classes once a week.  French is, in all its variations, a beautiful language and should be preserved in its entirety, a task today almost as formidable as Grégoire’s was over 200 years ago.

Sue Aran lives in the Gers départment of southwest France.  She writes a monthly blog about her life in France and is the owner of French Country Adventures, small personally guided, out of the ordinary festival, farmer’s and antique market adventures into Provence, Gascony and the Pays Basque.  Her Camargue Gypsy Festival and Provençal market adventures will take place on May 23 – June 2, 2015.  For details of this and other adventures please visit French Country Adventures.