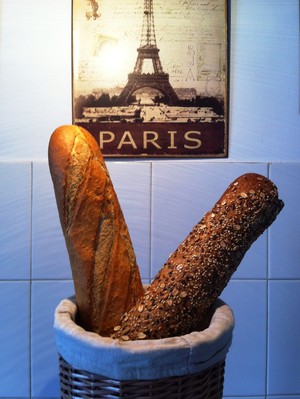 What could be more traditionally French than the baguette, that long slender loaf of bread that has become an instantly recognised symbol of France?  At any hour of the day, on the streets of any village, town, or city, you are likely to see the French strolling along with one of these elongated loaves tucked under their arm.  That’s because this ubiquitous bread can accompany their breakfast, lunch, or dinner.

The word “baguette” simply means wand, baton, or stick and refers to the shape of the bread.  This term became attached to the thin, round sticks of bread we know today, in the early twentieth century.  But the baguette’s history may go back much further.

No one knows exactly when or why this French loaf took on its current shape, but there are several stories, and even some laws that give us clues to the baguette’s heritage. 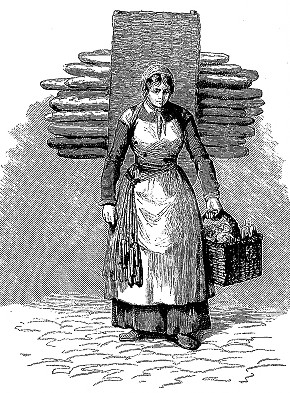 One patriotic tale explains the possible origin of the baguette (but not its shape) by linking it to the French Revolution. Lack of bread was the principal complaint from the people of Paris and it played a big part in the overthrow of the monarchy.  Bread was the mainstay of the French diet and they were tired of watching the nobility eat copious amounts of fine white loaves while they faced shortages and had to make do with bread that was barely edible.

So after the Revolution, making sure everyone had quality daily bread was high on the priority list.  In 1793, the Convention (the post-Revolution government) made a law stating:

“Richness and poverty must both disappear from the government of equality.
It will no longer make a bread of wheat for the rich and a bread of bran for the
poor.  All bakers will be held, under the penalty of imprisonment, to make only
one type of bread: The Bread of Equality.”

Some might propose that since the baguette is enjoyed by rich and poor alike, it could have been this Bread of Equality. It’s a charming theory and a very French idea of Liberty, Equality, and Fraternity, but could this law truly have created the forerunner of our beloved baguette? 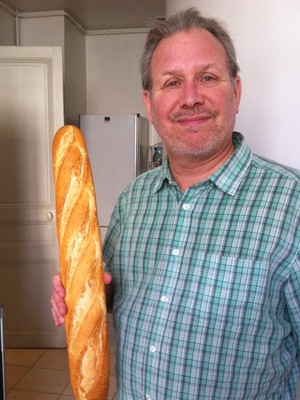 Or did Napoleon Bonaparte have something to do with it? Another story claims that Napoleon passed a law decreeing that bread for his soldiers should be made in long slender loaves of exact measurements to fit into a special pocket on their uniforms. Since those measurements were close to the size of a modern baguette, certain people think this might be when the bread first took on its current form.  If this is true, perhaps we have Napoleon to thank for the shape of our daily baguette.

Or was it the Paris metro? A different anecdote affirms that when the metro system was being built in Paris, the workmen from different regions just couldn’t get along and the overseer of the project was concerned about violence in the dark, underground tunnels.  At that time, everyone carried a knife to cut their bread, so the supervisor went to the bakery to request loaves that didn’t need to be cut.  A loaf of bread was regulated by weight, so in order to make it thin enough to be easily torn, it ended up being long and slender.  Considering this, we might owe our beloved baguette to rowdy metro workmen.

Whenever and for whatever reason the first wand-shaped breads appeared, by the mid 1800s in Paris, they were everywhere.  But these weren’t the French loaves that we see today.  No, they were baguettes on steroids. Many foreign visitors marvelled at the extraordinary lengths of the Parisian bread they saw. 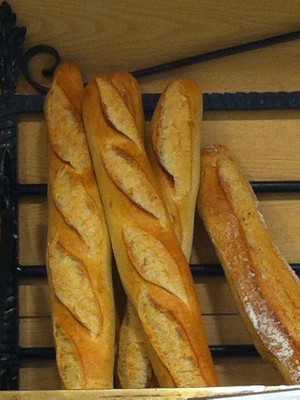 They described loaves of bread 6 feet (2 metres) long being delivered by women carrying them stacked horizontally, like firewood, in a frame on their backs.  Housemaids were on the streets at 6:00 in the morning carrying these long loaves home for their employer’s breakfast.  In the afternoon, young boys could be seen using these lengthy baguettes as pretend swords and engaging in mock battles before the bread made its way to the family table.  One visitor remarked that in a restaurant, the baker came in and stacked loaves 6-8 feet (2-2.5 metres) long in the corner like a bundle of sticks. Another describes the bread having to be laid on the dining table lengthwise because it was longer than the table was wide.

Those long breads that made such an impression on nineteenth century tourists must have been the forerunner of today’s more manageably sized baguette. The modern, shorter version seems to have come into being in the 1920s, when a law was passed prohibiting bakers from working between the hours of 10:00 p.m. and 4:00 a.m.  The current baguette was probably developed because its thin form allowed it to cook faster.  The baker could start at 4:00 in the morning and the baguettes would be finished in time for the first customer’s breakfast.  It was during this time that the term “baguette” first became associated with the slender loaves that are seen everywhere in France today.

Bread has always been important to the French, and for centuries, it was their main food source.  Today, even though bread is an accompaniment to a meal instead of the main course, it still plays an important part in French life – and the most popular bread in France is the baguette.  Since there are boulangeries (bakeries) everywhere in France, there’s never an excuse for not having a nice crunchy baguette with every meal.  And while you’re walking home nibbling on the end of your baguette, you can ponder the French Revolution, Napoleon, and the Paris metro… and be thankful that you’re not trying to manoeuvre a 6 foot (2 metre) long loaf of bread down the street.

If you are intrigued by French culture and curious about the history behind French traditions, this book is for you. In it, you’ll find a selection of short stories, written in a lively style, which often reveal little-known, but always fascinating facts about French customs.

• Why people have fish on their backs on April 1st?
• How the Bastille was taken down?
• Who collects teeth from under children’s pillows?
• Which sport honours the memory of a girl called Fanny?

You will discover the intriguing stories behind these and other French traditions.

French Holidays & Traditions is made up of twelve chapters – one for each month of the year, and each chapter contains one or two stories. These stories might relate to a holiday observed during that month, or they could relate to a tradition, which may not be associated with any particular date. Then, at the end of each chapter, you will find a list of holidays and observances for that month.  A handy reference for a monthly dose of French culture.