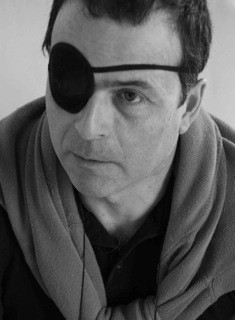 David Downie has called Paris home since 1986. His feature articles have appeared in over 50 magazines and newspapers worldwide and Downie is keen to share Paris with his readers. He has written several non-fiction books about Paris, his latest book being: Paris to the Pyrenees: A Skeptic Pilgrim Walks the Way of Saint James, an adventure tale-memoir with striking photography by Alison Harris. Ditto Paris, Paris: Journey into the City of Light, in its second edition and 9th printing. On the fictional side, Paris City of Night is his classic thriller set in Paris. Downie has also written several provocative and authoritative Food Wine books. When he’s not writing, he’s leading private custom tours across Europe.

David Downie is BonjourParis’ Person of the Moment:

What are you most proud of (in terms of your own achievements)?

The answer is at least a two-fer: 1) a 26-year life-enhancing union/marriage with wonderful, talented Alison Harris (the photographer); and 2) surviving as a writer for the last three decades despite the Internet and the “new paradigm,” and despite sudden-onset partial blindness: I have published over a dozen books and written probably several hundred articles, bent over my screen like Mr. Magoo, the Thurber character. I guess I’ve also got to crow about the fact that we hiked 1,100 km across France (and I have bad knees) and managed to turn the adventure into a book (out in April).

Pigheadedness, doggedness, insatiable curiosity, a peculiar definition of success (it’s not about money) and sacrifice (I don’t really subscribe to it as a notion).

Were you born in Paris or moved there?

I was born in the Haight-Ashbury neighborhood of San Francisco, and have been a resident of Paris since 1986 (though I travel more or less constantly in France, Italy, other parts of Europe, and America). 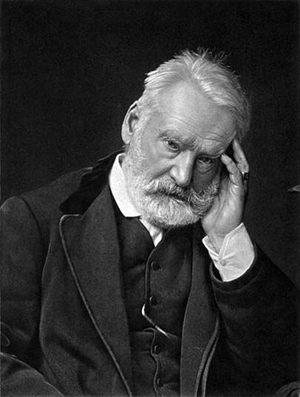 If you could share a coffee or bottle of wine with a fellow Parisian from past or present, who would it be?

I might choose Victor Hugo, in his later years, when he was plump and philosophical and perhaps slightly less in love with himself. I would ask him about the roots of romanticism, about how it could come to pass that despite his efforts and those of thousands of others Napoleon III and Haussmann were able to destroy nearly every trace of medieval Paris… I would ask about the revolutions of 1830 and 1848, the Commune, the Battle of Ernani, and so much more. His personality and talent spanned much of the 19th century and he crossed swords with (or leapt into the sack with) so many of the great men and women of his day.

There are too many to list, starting from our adorable concierge Maurice Nabet (whose patience and resilience are unmatched), to our local pair of butchers, several bakers, waiters, chefs, wine sellers, historians at the fabulous Carnavalet Museum and, at times, even some of the left-wing or green politicians who try valiantly to save Paris from further rape, who try to slow or remove cars from the city, who try to keep smokers from sharing their pollution with those of us who detest smoke, and so on.

What’s your favorite thing about Paris?

The pluckiness of Parisians, as per the above, and, physically, the proportions of the city: the width of the river, the height of most buildings, and the lasting imprint of centuries past in many pre-Haussmann period streets.

What’s the one thing that every Parisian should own?

A large weatherproof illuminated sign that reads: RESPECT YOUR NEIGHBORS AND FELLOW CITIZENS (AND TRY NOT TO BE OVERLY CRUEL TO VISITORS OF YOUR GREAT CITY).

An item you can’t live without?

Intelligence, culture, history, silence—if these be “items.” I’m not a materialistic type.  My happiest days have been spent crossing France on foot with almost nothing at all on my person, and I love to recycle anything I can.

Any pet peeves about Paris?

The cigarette smoke, the lack of common courtesy, and the maddening Paris-centric view of the world (it makes many Parisians paradoxically provincial).

Favorite place to go for lunch?

If I told you it would soon cease to be my favorite place because I would not be able to get a reservation (this has happened before, believe me).

Ditto. I could send you astray, to a place I don’t like, but that would be cruel. Actually half the fun is finding your own place to love. It’s sort of like religion, isn’t it? Why take something off the rack when you can explore, invent, combine and come up with your own dogma—and your favorite spot? 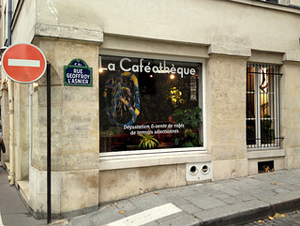 Best place for coffee or drinks?

Drinks: a wine bar such as Willy’s, or Aux Bons Crus (I’m not a trendy type, rather the opposite). Coffee: if you have patience go to the Caféotheque on Rue de l’Hotel de Ville.  They import and roast the beans, and spend about 56 minutes making you an excellent espresso or something approaching a cappuccino (a Latino-Parisian version thereof).  I have suggested to them that they send their barmen and women to Italy to learn how to make dreamy coffees in a matter of seconds, but they are resistant to any hint of increased speed or efficiency or, god forbid, sense of humor.

Surely you jest! I don’t, I hate, loathe and despise shopping and wish the boutiques and silly shops that have sprung up all over my neighborhood would simply vanish and be replaced by the wonderful old ugly useful places of old: butcher shops, bakeries, hardware stores, bookstores, especially the dying bookstore! I am a sworn enemy of gentrification and bobo shop-til-you-drop living.

Rue Saint Antoine still has several excellent indie produce shops, wine shops, cheese shops, a fine butcher… and then there’s the Boulevard Richard-Lenoir market on Thursday and Sunday, one of the best in Paris.

Too many to list. The Marais where I live is magical at night and in winter, and in certain parts where the bobos and trendies and yuppies and party people have not entirely denatured it. Otherwise, the areas around Butte-Chaumont or Montsouris are still mostly charming. And if I could live inside the cemetery of Pere-Lachaise I would: quiet!  Moody! Magical!! I am no necrophile nor am I morbid by nature but I do love that place, and it is a whole city of the dead. If only it had a nice little café or restaurant in it…

Most fun thing to do in Paris?

Walk, everywhere, but especially along the Seine, in the parks and the cemeteries.  Walk, walk, walk, sit in a café, watch, listen, needle, thrust and parry. Parisians love to be challenged, to fight with their frontal lobes, especially if you delight them by demonstrating that a foreigner or indeed an outsider to the city knows the difference between camembert and Livarot. 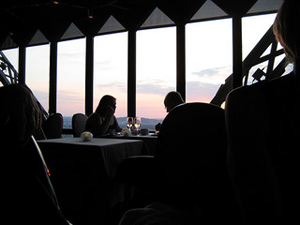 What’s the “touristy” thing you’d secretly like to do in Paris but haven’t?

Dine at the Jules Verne on the Eiffel Tower. I can’t afford it, but I know the view is astonishing (and I actually love the Eiffel Tower, an amazing piece of workmanship).

Well, as a private tour guide, I am a professional of the tourism industry if you will, so I engage in committing tourism quite often. What I try to do is share the city I love, and do so intelligently and with sensitivity, and please forgive me for sounding pretentious but I don’t know how else to put it. Tourism doesn’t have to be mindless and destructive. We occasionally go up the Eiffel Tower, for instance, or into Notre Dame, or even take a boat ride on the Seine. Why not?

Figure it out yourself if you can, do it yourself if you can, then be generous and share whatever you can if someone else is trying and failing and struggling and reaches out to you. Also, don’t be afraid to ask for information, help, whatever. Unsolicited advice in any case is generally unwelcome and does little good.

Three words to live by.

How about two words? Be kind. Or: Be Kind Always. Or: Laugh or Cry.

One thing you could change about the world?

Remove greed and violence as the driving forces behind the behavior of many men and, alas, even some women (who are naturally superior beings, non?). Also genetically modify most members of the GOP so that they morph from Neanderthals into 21st century human beings.

One thing you wish Parisians would stop whining about?

How hard life is and what victims they are of oppressive global forces: if they spent some time in the Sahel or an isolated rural village in, say, Latin America or parts of Asia, or in a suburban mall in the American heartland where all they could eat was fast food, they might see just how lucky they are, how privileged they are, how well-run and beautiful their city is, how enlightened their politicians are compared to those in most places.

So much! Lovely: I’d have a plat du jour at a favorite café, buy a book, and have resources leftover to sip an espresso on a (preferably smoke-free) terrace.

Yikes: way too many to list. War and Peace is certainly one of them, Madame Bovary another, but my wife and I have several thousand and dozens, at least, are wonderfully life-enhancing.

Again: too many to list. As a par-blind guy who can barely get through a working day without a migraine I don’t go to the movies anymore (one of the bona fide sad parts of my life). Of the classics: The Third Man, The Leopard, Chinatown.

Favorite city to visit (aside from Paris)?

These are impossible questions! How can somebody love just one, or two or ten? I do love especially Rome and Genoa, Venice, Amsterdam, and San Francisco, but also New York and and and…

Is there an annual event like a festival, gala or an exhibit that you look forward to every year?

The arrival of seriously cold, nasty weather that drives the trendy local bobos off the streets of the Marais and allows us to sleep.