Home Lifestyle Half a Sandwich 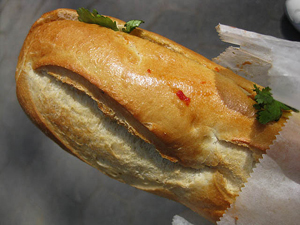 It’s a soup sandwich of metaphors, but I guess you could say that I led with my chin, though he never laid a glove on me, and surely my heart was in the right place. Or you could say I should have kept my mouth shut, but I thought I had learned an important lesson a few years ago about not doing that, about speaking man to man, and wanted to see if it had been worth learning. I thought it had been, I thought there was a moral to the story, maybe even a low candle-power enlightenment. It’s evening now, and I don’t know anything.

It began this morning. I said, “Hello, how are you?” to the man standing by a ground-floor window ledge with his back to the street. On the ledge he had an unopened six-pack of Leffe, a decent beer my beer-drinking friends tell me, and two or three other loose bottles. He was rearranging the bottles, moving them from the right toward the middle of the ledge, then moving one back. His clothing was the color of street dirt and probably had not been off his back let alone in a washing machine since he acquired it. A street person, anyone could tell you that, un sans domicile fixe, carrying or in his case wearing just about everything he owns and transfixed for the moment with the proper arrangement of his bar, though I’m pretty sure he has a clientèle of one. He doesn’t answer. I try again.

He turns just slightly, his back still to me, and growls something I can’t make out. I smile, start to say something and he more or less coughs out what sounds like “my beer,” bares two or three brown teeth and crouches as if to protect himself or to jump and fling himself onto me. No matter, I figure this is going nowhere with him, and I think it best to go somewhere else by myself.

It’s the kind of thing I’d ordinarily shrug off and forget—wouldn’t you? wouldn’t anyone? I tried being pleasant, treating him like another human being knowing that he’s a loony, a homeless man, a drunk. Paris is full of them, too full. And you can always say to yourself, as I habitually do, What the hell am I supposed to do? But I didn’t always, not always. I thought I had learned something… 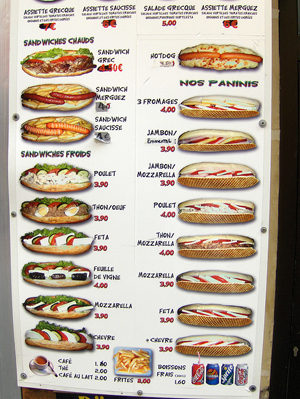 …because of half a sandwich. There’s a park I used to go to frequently, less often these days, where I’d sit down under the sycamores and eat a sandwich on those few days when I got hungry in the early afternoon. The sandwich I bought, from another Joseph who made crêpes and sandwiches and change with the same ungloved hands at the side-window of a café, was always the same—chicken, avocado, some greens, sprinkled with herbes de provence and mustard on one side of the baguette—and it was always more than I could eat. So I’d cut it in half with my pocket knife and, when it was time to push off, would offer it to one of the homeless men, or the occasional woman, who dozed during the day on benches in the park. Usually it was accepted with little more than something that could have been Merci or not, depending. Once a man asked me to describe the sandwich and looked dubious when I got to the greens, but took it anyway. And one time, the last, it was not usual.

The man took the sandwich, said thanks fairly clearly, and as I walked away, after telling him I was glad to share it with him, threw the sandwich at me and bounced it off my shoulder. I stared at him and, maybe for the first time in more than thirty years, my mouth dropped open. Startled yes, not hurt or frightened, but puzzled. What the hell was that about? I was yelling at him. He sat up straight on his bench, spat on the ground and said, Vous en avez rien à foutre. What do you mean I don’t give a shit? I shared my lunch with you. What’s the matter with you?

“Me? Nothing’s the matter with me. Yeah, you gave me a sandwich. But you never looked me in the eye and you didn’t even think you could talk to me. Why not talk to me? You thought I could use some food. Yeah, and maybe I could use some conversation, too, something from another human being. It never occurred to you, did it? I’m poor and dirty and not always sober. I’m also still alive, a man, if not the best one around. There may be a lot wrong with the way I look, but nothing’s the matter with me. Shit, I’m a man. You, you’re the problem.” 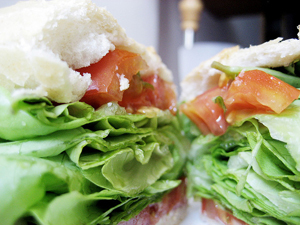 “I’m sorry,” I told him, “I really am. But I always…,” and suddenly I stopped or, I think now, choked on my own words. I knew I was going to say, Well, I always give away half of my sandwich, have for years, and just go about my business. And that would have proved his point better than he could have himself. I wasn’t dealing with another human being. I was eating one half of the same sandwich I always bought, giving away the other half as I always did and riding off into the sunset, ditto, step one, step two, step three, unvarying and, I don’t like saying this, untouched by the other guy. And he knew it, knew it better than I did, before I did.

“I don’t care if you’re sorry. Et alors? I really don’t care. I don’t want your sandwich and I don’t want to talk to you. Not now. Too late.” He lay back down on the bench and rolled over, his back to me. When I walked out of the park, I left the half sandwich still in its paper wrapper lying on the ground where it had fallen after he threw it at me and just missed my head.

I thought, “Well, it could have been worse, I could have given him a watermelon,” but the joke fell flat, didn’t make me feel any better, didn’t even make me smile. Same this morning, nothing to smile about there either even if our little comédie, seen safely from the best seats in the house, looked like a farce. Yeah, it was.

[A beautiful Saturday afternoon, ten days later, and I need to get out of the sun and sit. Apart from the one sans domicile fixe today, about normal given the neighborhood, and she’s asleep, nearly everyone in the park where I find a place in the shade seems to be sticking something in his mouth. I perch opposite a young guy and girl, around twenty, each with a sandwich, talking quietly. All at once the girl leaps up, puts her hand to her face and steps away. I can’t tell what happened, but she hands him her sandwich, starts to cry, the guys puts his arm around her and starts gently to walk her away. He stops, looks at me and offers me the remaining half of girl’s sandwich. If the first act is tragedy and the second farce, then what might this third act might be called?]