Home Lifestyle Girl on a Bus 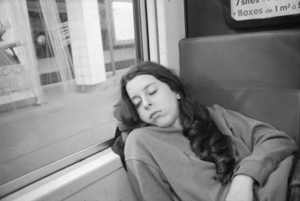 I would never tell her because it would break her heart if I did. But I will tell you that she is not a pretty girl—and not simply because she has fallen asleep on the bus, her head leaning against the window, with her mouth open. Maybe she thinks she’s pretty or wants to think she’s pretty or just wants the boys her age to think she’s pretty, but it would bend my own perversity and lack of manners to roust her from her dreams and ask her if she thinks so or if that’s what she wants. It would make no difference anyway. But I’m guessing that she wants to be pretty and has spent some money on the project.

Her one natural advantage is she’s young, about twenty give or take very little either way, and has some of the benefits that nature gives to young women, but not lavishly in her case and in so many others. Her skin isn’t blotchy or sallow, but there’s nothing in the look of her cheeks or her forehead that would make me—or more to the point, a lover—want to caress her face for the pleasure it would give her and for the tactile joy that touching her cheek would give him. Her open mouth makes it hard to tell what it might look like closed or, better yet, smiling, but it seems very large, made for eating potatoes whole, crushed and swallowed with one crunch of the jaws. Her body, as much as I can see through her clothes that are loose here and tight elsewhere, is ordinary enough as well: middle-sized breasts, and two or three surplus kilos on her belly, thicker thighs than she needs. It’s simple enough: she is not sexy, not even close at this moment, and of course that’s what she really wants to be.

There’s the evidence of her clothes. I may be the last, or the least likely, man in Paris to ask about how women dress, but I do respond to sexy clothing. She has spent some money on hers. Her scarf is certainly silk, her violet sweater looks like merino, and her very short skirt is a soft brown leather that folds almost like cotton. And it has folded because she fell asleep with her feet propped up, and no doubt any passerby in the aisle of the bus could report that under her bunched up skirt she has a pair of very fancy panties, maybe a thong, bright colors or a jaguar print.

And for what? All her efforts and the money she has spent have bought her nothing more than falling asleep on the bus heading through the Eleventh Arrondissement and into the Twelfth with her mouth open, looking negligible or just being overlooked (if she’s lucky), silly or absurd if not. Feeling terribly sad for her, I get off the bus and head back the way I came on foot, hoping for an empty and dark café where I won’t have to look at anybody.

Not that it works. A glass of Sancerre and some peanuts do me no harm, but I still feel sad for the girl on the bus, for her hopeless chase after beauty or sexiness or glamour or whatever the hell it is that the poor girl is running after so hard and, as far as I can tell, getting awkward, getting nowhere, looking foolish. I don’t like this gloomy feeling, and then a piece of good luck. 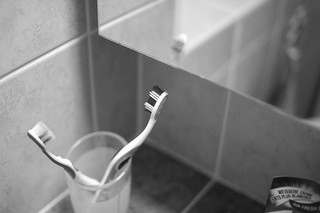 A couple comes in shortly and, though they’re some five or six metres from me, I can make out their argument—who couldn’t, seeing as how they are speaking about as softly as the le crieur public, but certainly not announcing that it’s 16h 30 and all’s well in the Twelfth. They are… no, she is letting him know that she has no objection to making love first thing in the morning when they wake up, but she’s told him a hundred times if she’s told him once that he must brush his teeth first, no matter what position, even la levrette.

…Imagine that, imagine him waking up in the morning, kissing her breasts, touching her intimately, and whispering softly in her ear, Bonjour, chérie, je t’aime, me voilà bandé, je te désire… et je me suis déjà brossé les dents! Any man might say as much, would say, I love you darling, feel how turned on I am, I want you, but it’s just too hard to imagine adding, “And I’ve already brushed my teeth.” It’s also hard not to burst out laughing, and I see that the barman and the waiter, the only two others in the café, are having the same struggle…

She keeps talking, detailing the quality of his breath in the morning and how she doesn’t like it no matter which end he approaches her from, no matter where. She doesn’t sit down, though he does, but he doesn’t know what to say. She repeats herself, so I know I am not hallucinating or simply deafer than I thought, then she walks out of the café, her husband trailing her and saying, I think, let’s go to the store right now and get me a new toothbrush. The barman, the waiter and I all stare at the door they’ve just walked through and then, like a well rehearsed trio, begin to laugh at the same moment and on the same squawky note, we all laugh as loudly as I’ve ever laughed in my life, loud and hard enough so I think I could pee in my pants—and the waiter may have, because he stops laughing first and heads for the WC on the double.

It’s hard to be sad or sore at heart when I’m laughing or even after I have finished laughing hard enough to split a gut. The girl? I still feel sorry for her, sorry that she was not born beautiful, sorry that she has believed all the women’s magazines with their ginned up glamour and their ads for clothes and makeup that are guaranteed to make her… make her what? a sexual object? And that’s not sad too? So, she’s chasing something she will never catch. She’s not the only one. And maybe it just comes down to this—that she shouldn’t fall asleep on the bus with her mouth open.  Otherwise, she’d just be another ordinary girl. Who’d care, who’d notice? Not a bad idea at all, keeping your mouth shut, given the evidence of Madame Brush-your-teeth’s big, loud mouth. You wonder why she chose this café and this moment to lecture her husband on early-morning sex and dental hygiene. Maybe, like the girl, she wasn’t paying attention, not really conscious, and her mouth just opened. Happens all the time.

Enough. It doesn’t matter at all. It’s over, anyway, and time to go. To be on the safe side, I make a detour to the WC before walking out into the evening. And despite the barman’s wink and shrug, I smile slightly at him and, since there’s nothing more to say, keep my own mouth shut.