An Interview with Eleanor Brown: Author of The Light of Paris 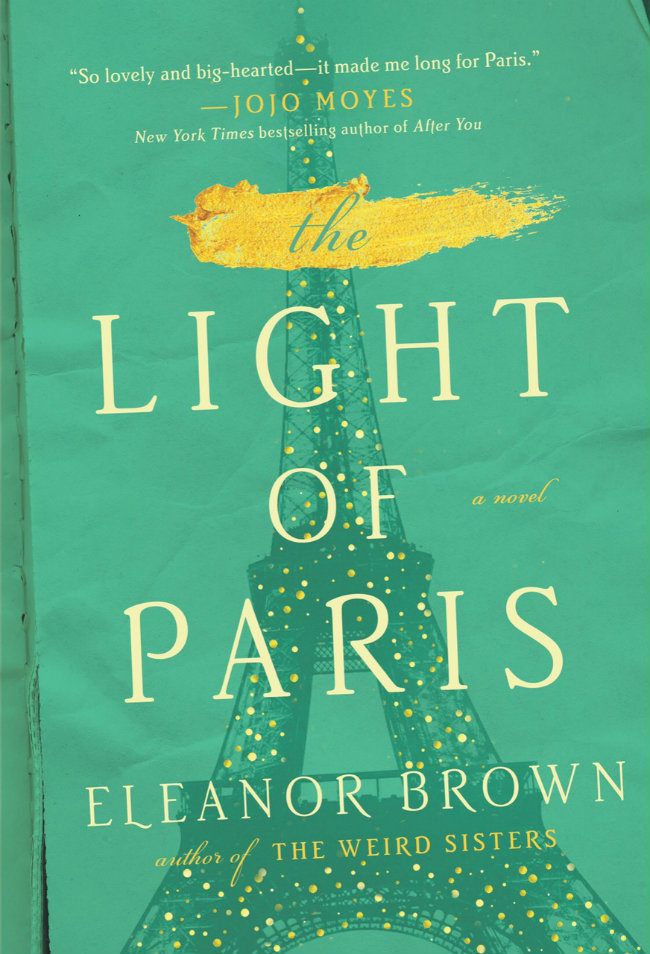 The Light of Paris by Eleanor Brown

Eleanor Brown is the New York Times bestselling author of “The Weird Sisters,” and now “The Light of Paris,” a novel she was inspired to write when she discovered a stash of letters written by her grandmother as a young woman in Paris. 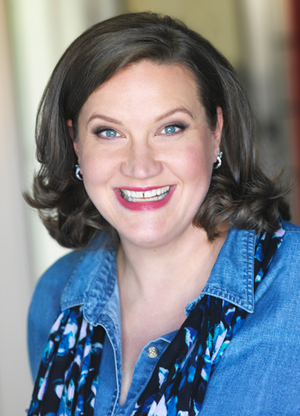 Recently released in paperback, “The Light of Paris” is the thoughtful, engaging story of one woman’s attempt to understand the life choices made by her grandmother, while struggling to make some important and difficult decisions of her own. This summer “A Paris All Your Own,” an anthology of new essays by 18 bestselling women writers collected and edited by Brown, will be released. Born and raised in the Washington D.C. area, Brown now lives in Colorado. She recently took the time to answer Janet Hulstrand’s questions about her work.

JH: Your novel, “The Light of Paris,” was published last year, and has just been released in paperback. What inspired you to tell this story, and why did you decide to tell it in the way you did, with about half of the action taking place in Paris in 1924, and the other half in Magnolia, a fictional (I assume! please correct me if I’m wrong…) medium-sized city in the southern United States, in 1999?

EB: A few years ago, when I was looking for the next book to write after my debut, The Weird Sisters, my parents mentioned very off-handedly that my grandmother had lived in Paris in the 1920s, and that we had all of the letters she’d written to her family while she was there.

My grandmother had died when I was still young, so I’d never known her well, but I’d certainly never heard this story before! I devoured her letters as soon as I could get my hands on them, and I was not disappointed. My grandmother had set off to Europe in 1923 for a trip to England, France, and Italy, but had been so captivated by Paris that she simply decided to stay – finding a job and a place to stay and setting about living the life we all would like to imagine ourselves living in Jazz Age Paris.

I knew there was a story there, but the more I thought about it, I felt it raised more questions than it answered. Why had my grandmother decided to stay in Paris? Why had she left? How had those experiences changed her, and how had that affected my mother, and then, by extension, me? How do the choices we make reverberate for generations?

So I used my grandmother’s story as the scaffolding to create Margie’s story in 1924 Paris, and then I gave her a granddaughter in 1999 Magnolia (fictional, yes, but based on Little Rock, though that’s a secret!) and allowed the story to unfold between the two of them.

JH: The title, “The Light of Paris,” works on at least a couple of levels. One of the things I really enjoyed in reading this book were the descriptions of nature, particularly the subtly, or dramatically, changing colors and textures of various times of day, various seasons, and so on. Perhaps this is because Madeleine, the narrator and protagonist, is a painter, and thus exceptionally sensitive to this kind of beauty. How hard is it to render this kind of visual detail in words, and is the process painful, or pleasurable?

EB: I am a stick-figure-level artist myself, so one of the things I had to do in preparing to write The Light of Paris was to learn about art. Paris came in very handy here – I spent so much of my time there researching this book going to museum after museum, looking at sculptures, paintings, films; watching the way the movements flowed into each other, the conversations artists were having through their work.

So when I sat down to write the book itself, I had a visual vocabulary to draw on in both storylines, but particularly in Madeleine’s, because as a painter, she definitely sees the world as a potential painting. I don’t remember its being difficult, but I think that was because I’d made such an effort to steep myself in a different language. I’m so glad to hear that came through for you as a reader!

JH: One of the main themes in “The Light of Paris” is how women (especially women, though not only women) often become trapped in lives that are not the ones they want to be living, and their attempts to escape those traps, to free themselves to live the lives they are meant to live. Can you say something about the complex relationship between place and/or time (especially historical time), and how these things can help, or hinder, us as we try to avoid, or escape, the traps we tend to walk, or fall, into? Also, how much of the success of that struggle do you think is really due mostly to individual character, or strength, or determination?

EB: One of the things that became very clear to me as I thought about my grandmother’s life was how different it would have been if she’d been born in a different time (and probably to a different family). Her family was Quaker, and so fairly liberal for the era (she was born in 1900), but her choices were still tightly circumscribed by the fact that she was a woman in the early 20th century. I think, for instance, she might have been perfectly happy not having children, maybe not even getting married, but she didn’t really have those options.

So that issue was very much on my mind when I wrote The Light of Paris. Margie, in 1924, is seeing the opportunities for women change around her, but that doesn’t mean that path was easy or simple for anyone, especially not for a woman raised like her with the family she had. It’s easy for us to look back with 21st-century lenses and assume that people had the same choices we did, but men and women on the forefront of change always have a difficult time.

Madeleine’s story takes place in 1999, when culturally women have many more choices and much more power, but the expectations of her family weigh heavily on her, making it difficult to take them. However, Madeleine’s story is more one of insecurity – she’s got the potential, but she has to find the strength to make the choices, so I think she’s an example of the problem resting more on the individual than the culture. 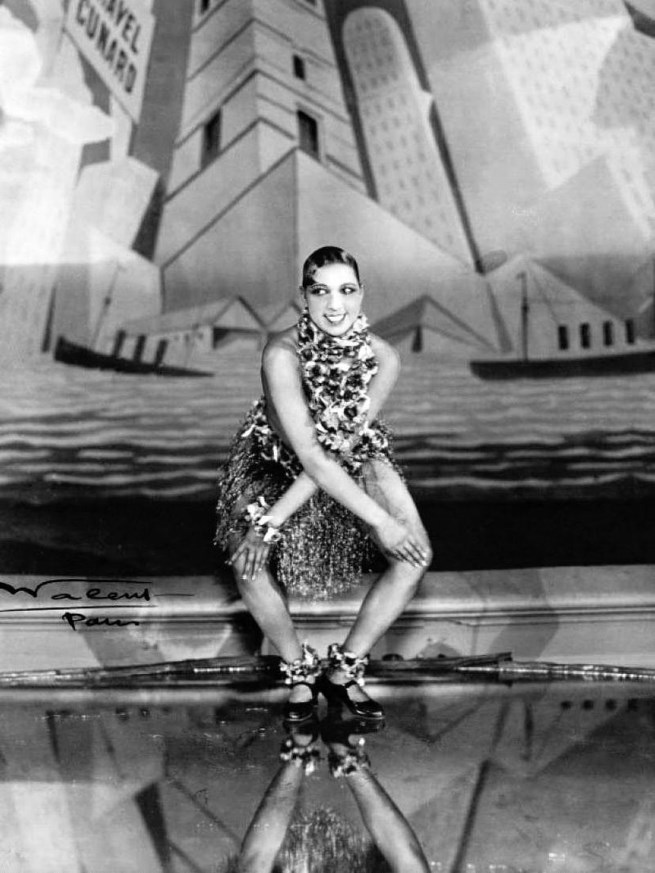 EB: Margie’s story was great fun – putting myself into the shoes of this young woman in the swirl of Jazz Age Paris who just wants to experience absolutely everything and is so sweet and charmingly naïve made it easy to create an engaging experience.

Madeleine’s story was much more difficult, mostly because when the story begins, she is having a really tough time of things. However, she’s got a great sense of humor and is on the cusp of some big things if she can just overcome the stories she tells herself, so I knew people would be able to relate to her if I brought those things out.

JH: You have also edited an anthology of essays scheduled for release this summer called “A Paris All Your Own: Bestselling Women Writers on the City of Light.” What made you want to create this collection, and what new insights into Paris did you gain in the process of writing your own essay, as well as gathering the others for this collection? What was the most surprising thing you learned in that process?

EB: It wasn’t until I started writing The Light of Paris that I really thought about what a proliferation of books there were, especially by female authors, about Paris. Paula McLain’s blockbuster The Paris Wife brought my attention to the idea of Paris books and novels as a genre, but there were so many more. I had a very particular reason for writing about Paris, but I was curious about what had brought these other writers to their stories, and why we continue to be so hungry for them. 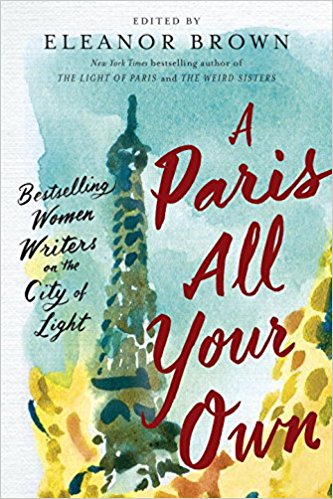 On a personal level, I talk in my essay about the mixed time I had in Paris, and I think I wanted to know why other people fell in love with the city in ways I didn’t manage to. One of the things I love most about the anthology is the diversity of experiences all the writers had – some of us had those perfect, romantic Parisian moments, but a lot of us did stupid things and embarrassed ourselves and…well, let’s just say that even Paris is no cure for being human.

JH: I love the when-you’re-in-Paris-do-and-don’t tips you’ve invited the authors of each of the essays in “A Paris All Your Own” to share with readers at the conclusion of their essays. Do you have one piece of advice for someone going to Paris for the first time, one piece of advice that stands out as being more important than any other?

EB: A number of the essays get at this idea in different ways, but I think my greatest recommendation would be not to attack Paris as a checklist of Important Things I Must See but as a real place to experience.

When I think back on my time in Paris, I don’t focus on seeing the Mona Lisa or the Hall of Mirrors at Versailles or the view from the Eiffel Tower, though I did all those things. They simply weren’t very memorable experiences – mostly they were crowded and unemotional. Instead, I remember stumbling on an exhibit of Marie Laurencin’s paintings in the basement of the Musée Marmottan Monet, and being utterly enchanted by her work, though I’d never heard of her before that day. I remember getting lost in the twisting streets of a distant arrondissement that had recently been visited by a Banksy-esque street artist. I remember eating an early dinner in a deserted Moroccan restaurant on our last night in the city, the food so hot it burned my tongue, but so delicious I couldn’t stop eating.

Treating a new place as an opportunity for discovery rather than conquering is good travel advice in general, but I think is especially true of Paris, which unfolds all the more deliciously if you slow down and allow yourself to enjoy it.

JH: What are you working on now (if you are willing to reveal it)? And will you be in Paris to talk about “A Paris All Your Own?” I hope so! I would love to be in the crowd if you are here…☺

EB: I’m terribly superstitious about talking about what I’m working on, so I’ll just say I’m happily writing away. No plans to return to Paris yet, but you never know…

Eleanor’s book The Light of Paris is available on Amazon below.

Lead photo credit : The Light of Paris by Eleanor Brown