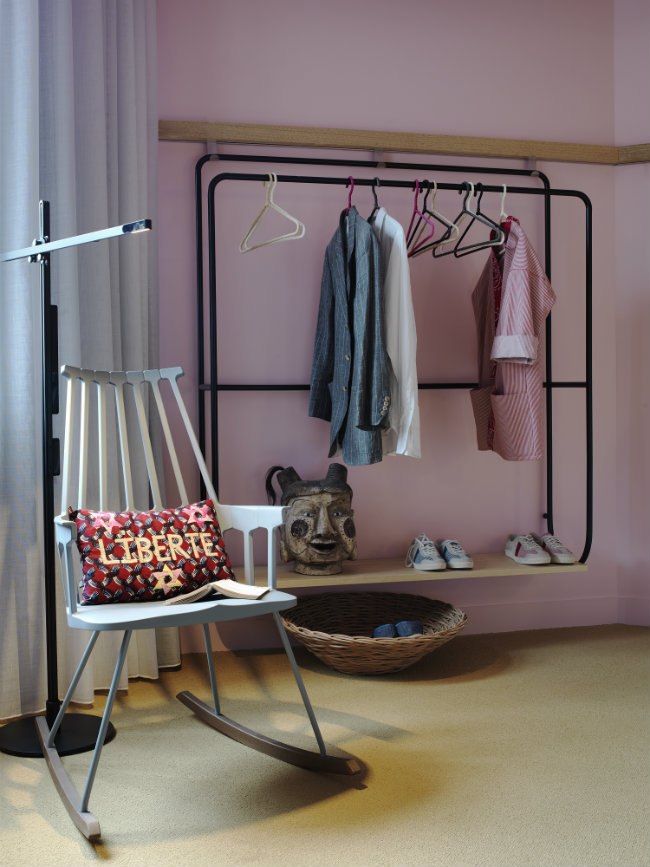 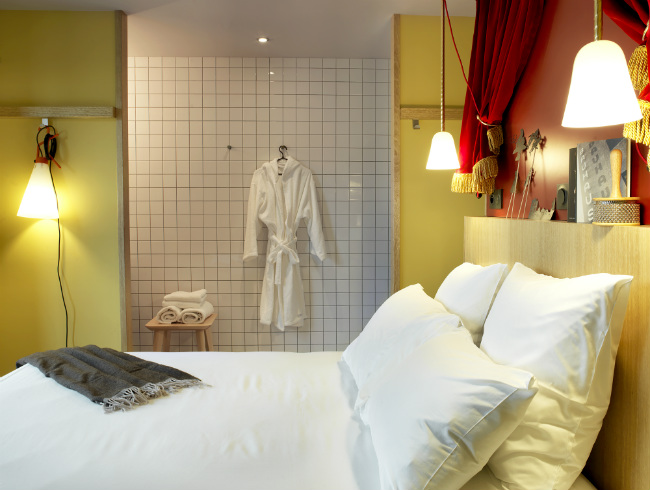 A room at the MOB Hotel. Photo: Paul Bowyer

Buddist temple bells herald your arrival through the thick orange doors decorated with a dragons head. Welcome to the structured chaos of MOB HOTEL, a brilliant concept created by philosopher and Renaissance man Cyril Aouizerate – you know him as co-founder of Mama Shelter with Serge Trigano, Philippe Starck and Michel Reybier. 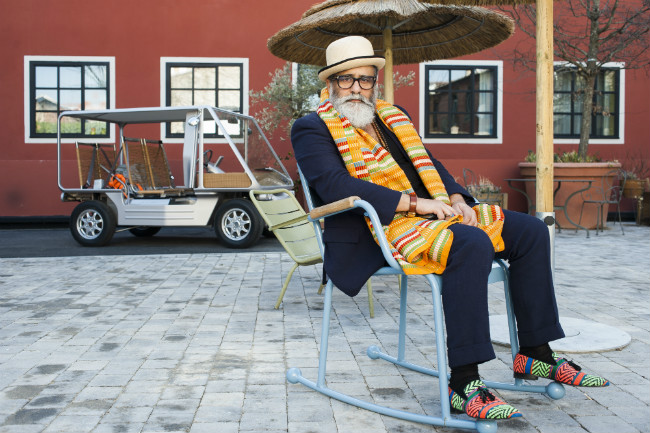 The €13 million project’s decorator-architects are avant garde designers Valérie Garcia and Kristian Gavoille. To the right as you enter note the picture gallery – portraits of everyone who worked on the MOB project. Look up, there’s a boutique and colorful reception area filled with “must have” MOB memorabilia and eclectic temporary exhibitions of art and jewellery making. Guests can rent an iPad Pro to watch films or work. The AIR MOB lounge (€29 per person) is where guests chill before check-in or after checking-out. Here there’s a TV (there are none in the rooms) shower, library, dining tables; food can be ordered from the restaurant, and you can call home from the state-of-the-art Skype telephone booth. 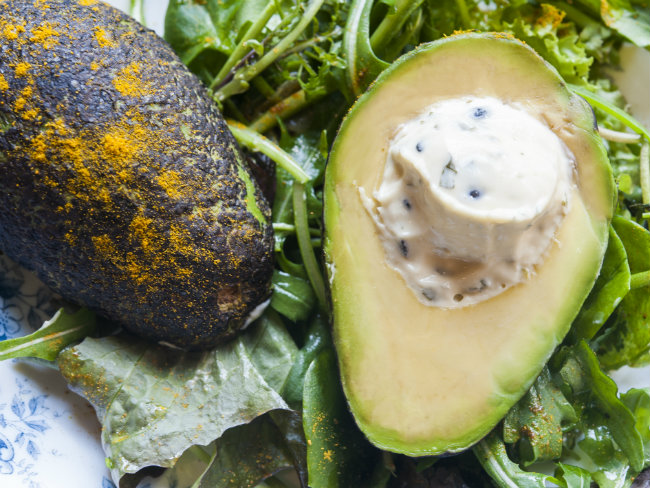 The delightful restaurant area (90 inside – 90 outside) with picture windows and covetable fresque printed curtains overlooks the terraces and gardens. It sprawls informally over a huge space the centerpiece being a magnificent 3-ton central oven watched over by chef Brice Morvent, a talented M6 Top Chef finalist. His mission is to use only seasonal organic ingredients, so you are unlikely to eat the same thing twice. The food’s simple – no Sunday Brunch– not in line with MOB’s philosophy. On the short menu (organic wines, beers, fresh juices and smoothies), say tasty Tajine of chicken, carrots and potatoes (20€). Do taste the “grilled cauliflower” inspired by Israeli street food (10€), Burnt Avocado (10€), copious Salade Niçoise (14€) and sensational pizzas (12-16€). The wine card includes Michel Reybier’s excellent Goulée by Cos d’Estournel Medoc White (49€). 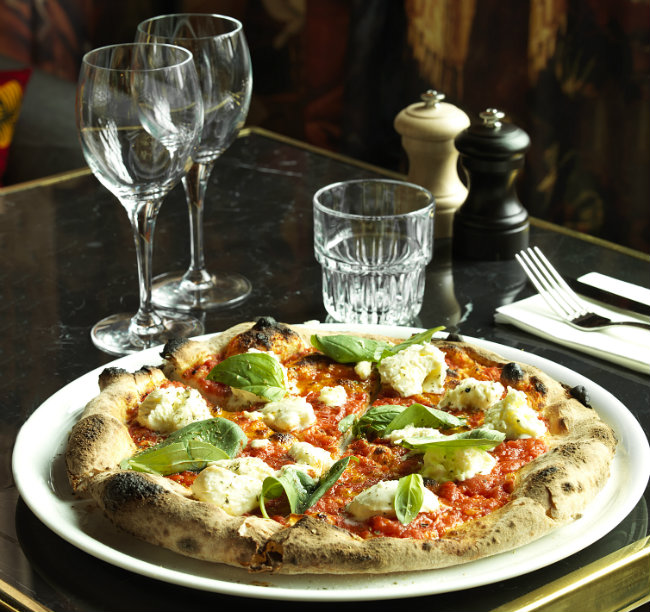 Not only food in the restaurant but a big table football game for 8 people, a fireplace, Hemingway library (take and leave books) and a traditional Parisian zinc bar – downstairs, in the rest room, philosophy lectures broadcast non-stop!

The multi level garden has tables (and parasols) for breakfast lunch and dinner, barbecue, cinema screen (headphones provided) children’s activity area and even boasts a community garden tended by the locals and, from time to time a food truck, and an oyster and white wine bar. 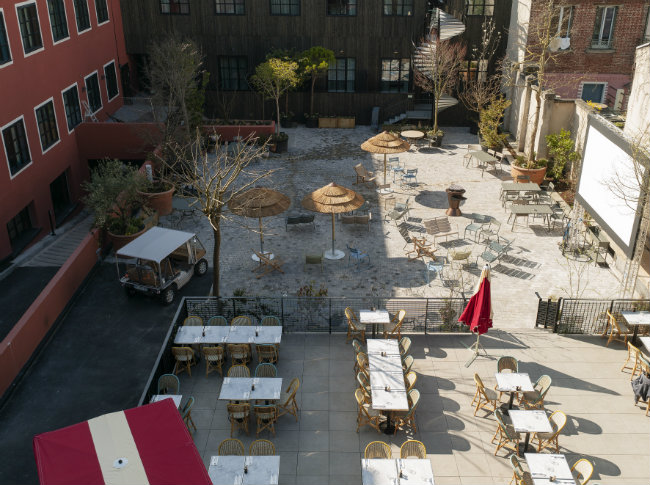 The exterior garden at the MOB Hotel. Photo: Bruno Comtesse

There’s 92 minimal Scandi style MOB rooms (from 99€ for a double + breakfast 9€)– some with spacious planted patios. Bathrooms are white, bright and dazzling featuring, free on request, Dyson hair- dryers. In the MASTER MOB rooms (about 170€ + breakfast), a large SMEG American-style fridge to pack with champagne and caviar – or just mineral water, juice, face masks and eye creams. In each room there are books and a “poetic desk” for creative activities, work or writing. Guests are invited to make overseas calls free of charge and can accommodate additional guests on the in-room bouncy Air Beds! 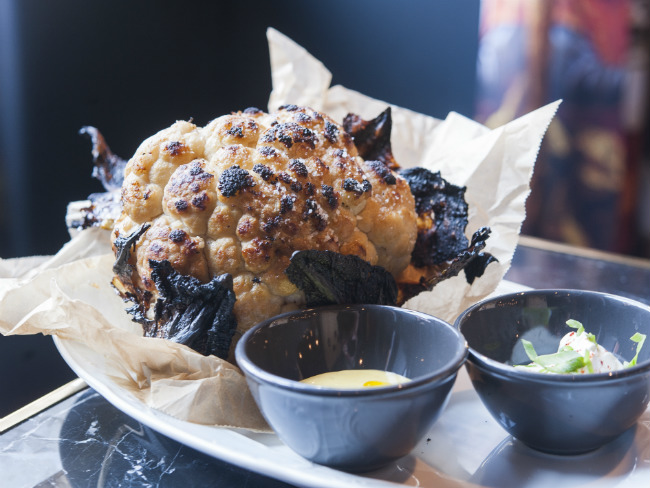 The grilled cauliflower at the MOB Hotel. Photo: Paul Bowyer

Before leaving, sign your name on the graffiti mirror and take one last photo in the Starck designed photo booth. Print photos of your MOB experience from your cellphone, USB flash drive or directly via Bluetooth, and set off with all your memories preserved on glossy paper.