What do Wallpaper, Balloons and Revolution have in common? La Folie Titon!

When the French Revolution is discussed everyone thinks of the Bastille. However, there is a little visited site in Paris where riots began on the 28th of April 1789. It was these riots that set in motion the rioting that marked the beginning of the French Revolution and the historic storming of the Bastille. This historic spot is the La Folie Titon on old Faubourg Saint Antoine marked by two simple plaques. These plaques are attached to a stately apartment building that is, of course, locked. Be patient, someone is bound to enter or exit. If you can get past those locked front doors there is beautiful tile work describing the history of La Folie Titon. The tiles are mounted very high in the entrance on the left side and I had wished that I had a flashlight to better see them.

The famous manufacturer of royal wallpaper was located here at the La Folie Titon and it was owned by Jean-Baptiste Réveillon.

Monsieur Réveillon’s paper expertise was a perfect match for two brothers, Joseph-Michel and Jacques-Etienne Montgolfier. These two young men are well known for their invention of the montgolfière-style hot air balloon and for launching the first manned balloon. Fittingly, this historic launching of a manned balloon carried one of the brothers, Jacques-Etienne Montgolfier. 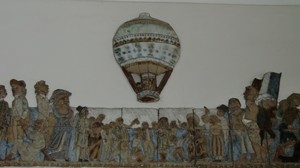 The first balloon that the brothers launched was made of sackcloth over several layers of thin paper. It weighed a total of 500 pounds and it was held together with 1,800 buttons. Fish nets were then placed overtop of the sackcloth and paper to keep the construction stable.

The Montgolfier brothers, in collaboration with Jean-Baptiste Réveillon and his paper factory, constructed a 37,500-cubic-foot envelope of taffeta coated with a varnish of alum. This balloon had the decorative touches of Réveillon. It was sky blue with signs of the zodiac and suns that had Louis XVI’s face in the center. Included in these decorative touches were the royal monogram, fleur-de-lis and many golden flourishes. On the base of the balloon were golden eagles and the cloth drapery was red and blue. All in all a truly magnificent balloon; all 37,500-cubic-feet of it!

The first public demonstration given by the Mongolfier brothers at Annonay on the 4th of June 1783. This flight covered 2 kilometers and lasted ten minutes.

The second of their trial lifts was launched at the factory on the 11th of September 1783. Only 8 days later, on 19th of September, they launched another at the La Folie Titon and this one supposedly included a sheep, a duck and a rooster. The success of these flights was repeated before King Louis XVI of France and Queen Marie Antionette at the Royal Palace in Versailles.

Ironically, Monsieur Réveillon was not a nobleman. He was a self-made man who had begun his career as an apprentice in a paper factory. He became an extremely successful Parisian business man who was innovative in the manufacture of wallpaper thus accounting for his far reaching business success.

Réveillon employed over 400 individuals who were well paid for that era. My understanding is that Réveillon made proposals to the General Assembly that were determined by the populace as contrary to the benefit of his employees. I read accounts that were both pro and con. Regardless of the validity of the proposals, the anger of the populace was not rational and thus La Folio Titon became their target. It was torched and burned to the ground. Unfortunately, the loss of the factory also meant loss of many jobs never to be recovered. 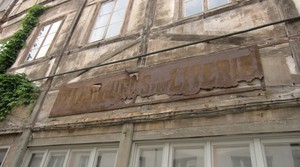