I’d like to pay tribute to a woman who was not a sign of her time, but a sign of times to come. She was the first woman in France ever to receive a university doctorate, the first woman professor at the University of Paris, the first woman to win a Nobel Prize and the first person to win two in two different fields. She was a devoted mother, sister, daughter and wife. She was the first woman to be buried at the Panthéon, a secular mausoleum once for great “Frenchmen”, now “citizens”, due not to having married a giant but to having been one herself. She knew the meaning of hard work, living much of her life in poverty, but she put the needs of humankind before the needs of her pocketbook. Her name: Marie Curie. 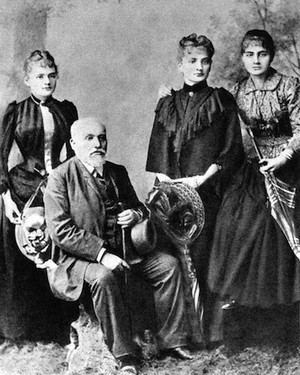 Marie Curie, née Maria Skłodowska, hailed from Warsaw in a partitioned Poland. Ironically, she may never have come to France had she been able to wed her first love. He was the son of a landed family; she was a penniless relation. His parents disapproved of the match and broke his engagement to the young and brilliant Maria. Kazimierz Żorawski, the story goes, would never find love again.

Brokenhearted and unable to study in her native land due to her gender, Maria was in need of a good distraction. She traveled to Paris in 1890 at the insistence of her older sister, Bronislawa, who had moved there with her new husband to study medicine.

In Paris, Maria changed her name to Marie and took up studies at the Sorbonne, University of Paris. Life was difficult, not just because she was paving her way in a man’s world, but because her meager finances forced her to study by day and work at night. For years Marie struggled along, earning not one but three degrees, in chemistry, mathematics and physics, while barely making ends meet tutoring less-astute pupils. 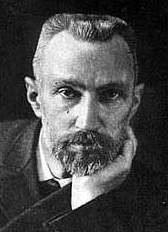 By 1894, Marie had become fascinated with the magnetic properties of metals. That’s when she met the talented and dreamy-eyed Pierre Curie. Their mutual interest in magnetism literally drew them together. It didn’t take long before their lives, both personal and professional, were completely intertwined. They married in 1895 and from that point the two rarely left their shared laboratory and each other’s sides. They were inseparable, lovers as well as scientific collaborators.

But what is not commonly known are the difficulties the Curies faced in their efforts to unlock the mystery of the radioactive atom, and how selfless their work was despite the deleterious effects it had on their health.

In 1896, Henri Becquerel discovered that uranium salts emitted rays that could penetrate solid matter, inexhaustibly giving out energy. Marie determined to study this phenomenon for her doctorate in science. She postulated that this “activity” was not due to the interaction of molecules in compounds, but that it came from within the atom of a single substance. But which one? She found that other chemical compounds, most notably pitchblende, gave off similar penetrating rays. The race was on to collect as pure a sample from pitchblende as possible so that research into radioactivity could begin in earnest. Pierre, realizing that his wife was onto something big, dropped what he was doing to help her.

But pitchblende is complex, containing up to 30 different chemical elements. And it took the couple years, working in a makeshift laboratory in an unheated shed with a leaky roof, before they had stripped away each one and isolated the active element within: they named it radium, from the Latin word for ray. 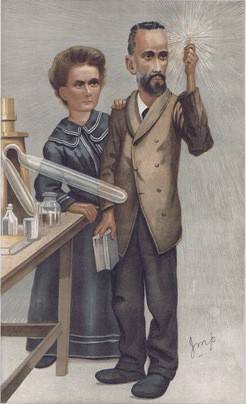 The mysterious blue-green light emitted by radium captured the attention of public and industrialists alike. And in 1903 the couple’s fortunes began to turn. Marie completed her doctoral thesis, the first woman ever to do so in France. Pierre was offered a chairmanship of the Sorbonne Department of Physics, which came with a better salary and a proper lab. Later that year, they were awarded the Nobel Prize in physics.

But an easier life at the top of their profession was not meant to be. Both were often exhausted and in pain, too ill even to travel to Sweden to accept their prize. The already tiny Marie had dropped 20 pounds. Though Pierre had by now proven that radium could damage living tissue, thus opening the door to new treatments in medicine, the two never linked their health issues to their research. They handled radium samples with her bare hands and carried test tubes containing radioactive isotopes in their lab coats.

In 1906 Pierre was struck by a horse-drawn vehicle while crossing the rue Dauphin. His skull was crushed. He died instantly.

Despite feeling alone and adrift, Marie agreed to take over Pierre’s chairmanship, making her the first woman professor in French history. She carried on working and in 1911 won her second Nobel Prize in chemistry for her discovery of radium and polonium. This prize was hers and hers alone. Nevertheless, the French Academy of Sciences, refusing to abandon its prejudice against women, denied her bid for membership.

At this point Marie could have struck gold with a patent on the radium-isolation process that she and Pierre had so tirelessly perfected. But she refused, preferring instead that the world should benefit from and be at liberty to expand upon their research.

And her selfless acts did not stop there. Suffering increasingly fragile health, Marie pressed on, traveling extensively to raise funds for the creation of the Paris Radium Institute. When war broke out in 1914, she looked for a way to help, convincing wealthy individuals to donate their cars for use as mobile x-ray units to help treat wounded soldiers at the front. She, in turn, donated her own stores of purified radium and even drove the vehicles herself. In 1925 she founded the Warsaw Radium Institute with her sister, Bronislawa, now a physician.

The world lost Marie Curie in 1934. She died from aplastic anemia, a blood disease now tied to overexposure to radiation. Sixty years later, in 1995, her remains and those of Pierre were transferred to the Panthéon. Marie was then the first – and is still the only – woman to be buried in the church-turned-mausoleum due to her unflagging contributions to both science and society.

Sarah Towle is founder & creative director of Time Traveler Tours, interactive mobile itineraries for teens, ‘tweens and the young at heart that put history in the palm of your hand. The first tour in the Time Traveler Tours Paris series, Beware Madame la Guillotine! is expected to launch June 2011. Sarah also maintains a weekly blog about French history and culture and what it means to build an App. Jettez un coup d’œil .