If you have unlimited financial resources and fancy an extravagant but refined stay in Paris, you’ll want to consider  the Pompadour Suite, which recently opened at Le Meurice, a palace hotel located across from the Tuileries Gardens on the right bank of the Seine.

Inspired by Madame de Pompadour, arguably the most famous, high-powered mistress of Louis XV, and patron of the arts, the Pompadour Suite commands $2,335 per night. However, if you’re like me, you’ll simply enjoy leafing through the pages of high-end magazines showcasing the redesigned suite and wondering what it would be like to spend a night or two in such extravagant surroundings, while sipping the bubbly from a champagne coupe, ostensibly modeled after the shape of Madame de Pompadour’s breasts.

There are many anecdotes attributed to Madame de Pompadour, born Jeanne-Antoinette Poisson on December 29,1721, in Paris to François and Madeleine La Motte Poisson. Her father was forced to leave the country in 1725, following a scandal over a series of unpaid debts, a crime punishable by death, leaving her mother to raise her and her brother, Abel-François. Almost immediately thereafter Charles François Paul Le Normant de Tournehem, the local férmier général (tax collector) became Jeanne-Antoinette and Abel-François’s legal guardian raising the suspicion that he was their biological father.

As a child Jeanne-Antoinette was precocious and uncommonly pretty. Her mother sent her to the Ursuline convent in Poissy where she received a good education. But when she entered adolescence Jeanne-Antoinette retuned home so that her mother could oversee her training, mindful of a fortune-teller’s prophecy that she would one day win the heart of the King. Fortune tellers were very common in 18th century Paris. In fact, over 50 could be found at any time on the rue St. Honoré near the Tuileries Gardens. It was not surprising then that Madame Poisson patronized them; what was surprising was that the prediction came true.

Jeanne-Antoinette was educated as only royal mistresses-to-be were in her day, taking personal charge, her mother hired tutors who taught the young girl to memorize entire plays by heart, dance, sing, paint, engrave and play the clavichord. The greatest expense of her education was the employment of renowned singers and actors, much of it paid for by de Tournehem, further fueling the rumors of his paternity.

At age 19, now an enchantingly beautiful, astute woman, Jeanne-Antoinette entered into a marriage of convenience with de Tournehem’s nephew, Charles-Guillaume Le Normant d’Étiolles. Subsequently, they had two children, a boy who died in infancy and a girl who succumbed to peritonitis at the age of 10. Favoring his nephew over all of his other relatives, de Tournehem made him his sole heir. As a wedding gift, de Tournehem gave his estate at Étiolles, which was situated on the edge of the Royal Hunting Ground in the forest of Sénart, to his nephew. 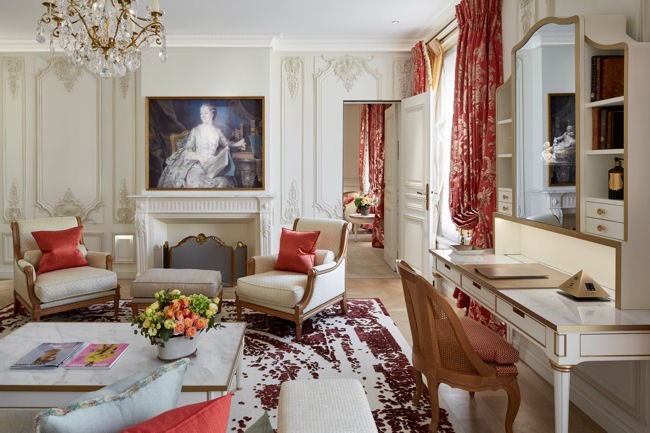 Now Madame d’Étiolles, Jeanne-Antoinette, became extremely popular in fashionable Parisian circles and soon founded her own salon which was attended by important philosophers, including the primary satirist of the French Enlightenment, Voltaire, with whom she became close friends. As she achieved celebrity, King Louis XV heard rumors of her intelligence, talents and beauty. In 1745 a group of courtiers, including de Tournehem, promoted her to the King, who was still mourning the death of his third “official” mistress, the Duchesse de Châteauroux, formerly known as Marie Anne de Mailly-Nesle, youngest of the five famous de Nesle sisters, four of whom became mistresses of the King.

Louis XV ruled France from 1715 until his death in 1775 from smallpox aggravated by syphilis. Having succeeded his great-grandfather, Louis XIV, at the age of five, he was known for his sexual voracity, enjoying the charms of over 100 mistresses, and his unflattering melancholy. He was officially married to Queen Marie Leszczyńska, daughter of King Stanislaw of Poland. But Louis preferred his mistresses to his wife. On the night of February 25, 1745, he met Jeanne-Antoinette d’Étioles, an invitee at one of his masked balls at Versailles. Less than a month later she became the King’s mistress and was installed at the palace in an apartment directly above his, connected by a secret staircase.  The official separation between her and Charles-Guillaume was announced on May 7th. 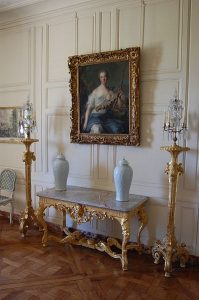 Even though Jeanne-Antoinette had captured the King’s heart as had been foretold, Madeleine Poisson did not live to see her daughter become Louis’s undisputed mistress; she died in the spring before Louis could elevate Jeanne-Antoinette from commoner to titled Marquise, which he did by purchasing the Marquisate of Pompadour in June, granting her the name by which she is known historically. Madame de Pompadour: she was formally introduced to his court on September 14, 1745.

Madame de Pompadour’s charm and wit gained her far more friends than enemies. Even the Queen, who had been avoided by previous mistresses, deeply appreciated the respect and deference shown to her by Jeanne-Antoinette, and openly acknowledged the considerable efforts she exerted to amuse the King. Jeanne-Antoinette threw grand dinner parties and had plays written and performed with her as female lead, to appeal to Louis’s tastes, and had portraits of herself painted to remind him of her beauty. According to one legend the “marquise cut” diamond was originally commissioned by Louis to resemble the shape of her mouth. She often accompanied the King on hunts and visits to his many properties.

She suffered two miscarriages in 1746 and 1749, at which times she arranged lesser mistresses for Louis while she was unable to attend to his needs. The combination of her fragile health and his roving eye caused him to replace her in his bed when she was only 29. Although they ended their physical relationship, Louis remained devoted to her and continued to rely on her keen advice, ranging from art to foreign policy. In fact, the period of her greatest influence over him was the decade after they had ceased to be lovers. When she became his mistress, no one expected her to retain his affections for long, but she was undisputedly, the most powerful woman in France for nearly 20 years.

Madame de Pompadour played a key role in making Paris the capital of taste and culture in Europe. She was a passionately devoted patron of the arts, sciences and literature, sponsoring many painters, sculptors, architects, furniture craftsmen, interior designers and writers, including the aforementioned, Voltaire. Through her influence her guardian, de Tournehem, became directeur général du Batiments du Roi, overseeing all royal building projects. Following his death in 1751 he was succeeded by Madame de Pompadour’s brother, Abel-François, the Marquis de Marigny. Together they designed the Place de la Concorde and the Petit Trianon on the grounds of Versailles. 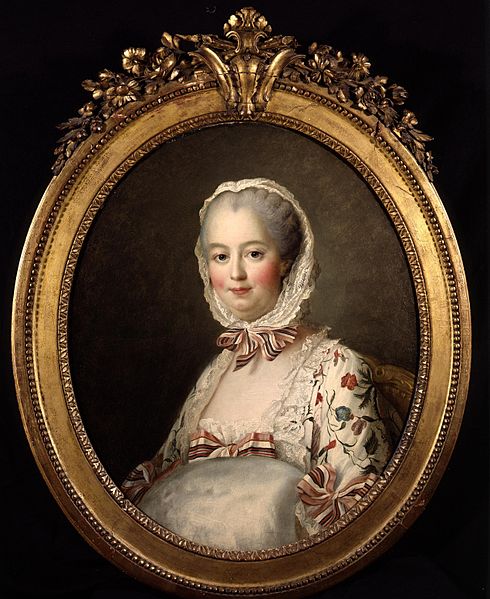 Portrait by Drouais of Madame Pompadour in 1760s. By Igor Sokol

She was also responsible for the development of Sèvres, which became one of the most famous porcelain manufacturers in Europe. She also protected the Physiocrates, a group of French Enlightenment economists, who believed that the wealth of nations was derived solely from the value of agriculture. The Physiocrate’s theories paved the way for Adam Smith, considered to be the father of modern economics. Additionally, she supported and defended the development of Diderot’s mammoth Encyclopédie, (one of the first such works aggregating human knowledge into one volume), especially against those of the Church who sought to have it suppressed.

Late in the winter of 1764 she contracted tuberculosis and died on April 15, barely two months later. Looking at the rain during the removal of his mistress’ coffin from Versailles, the devastated King reportedly said: “La marquise n’aura pas de beau temps pour son voyage.” The marquise won’t have good weather for her journey. Expressing his grief over the passing of his dear friend, Voltaire wrote, “I am very sad at the death of Madame de Pompadour. I was indebted to her and I mourn her out of gratitude. It seems absurd that while an ancient pen-pusher, hardly able to walk, should still be alive, a beautiful woman, in the midst of a splendid career, should die at the age of 42.”

Jeanne-Antoinette Poisson, Madame de Pompadour, was laid to rest at the Couvent des Capucines in Paris.