The Toast of Paris: Colette, The Great Writer and the Myth 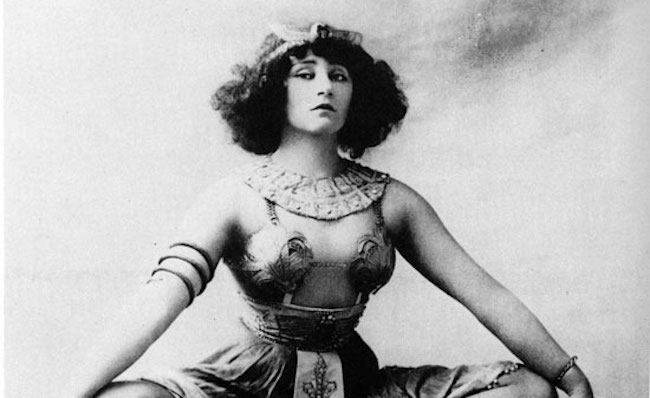 For fifty years Parisian cultural life centered on the writer Sidonie Gabrielle Colette. Known simply as Colette, her name was one of the most famous in France.

At her death in 1954, Colette’s fame was still in place. The Claudine books and her Chéri novels were selling briskly and Gigi had been adapted into a play featuring the starlet Audrey Hepburn. Her legacy also included a half-century of autobiographical work: memoirs, portraits, notes, and letters. Her critically acclaimed writing earned the approval of many fellow writers including André Gide and Marcel Proust. Like Proust, Colette was a novelist whose writing was overshadowed by their own personal myth. 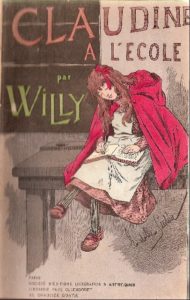 The myth that spun about Colette was as colorful and scandalous as any of her own novels. In the public eye since the age of twenty, she worked constantly, producing novels, plays, and film and radio scripts. She became an actress in the music hall, scandalizing audiences by bearing a breast. She had a conjugal relationship with another woman and often dressed as a man. She worked as a journalist, reporting home from the Front during World War One. At sixty, she started a short-lived career as a beautician. Nominated for the Nobel Prize in Literature, she became the second female Grand Officer of France’s Legion of Honor. Colette was the first woman in France’s history to receive a state funeral, yet the church took no part. This mixture of praise and condemnation followed her lifelong.

Colette was born in Saint-Saveur-en-Puissaye in 1873, never losing her Burgundian accent. Known then as Gabri, she was the daughter of her mother’s second marriage and lived in a household of older half-siblings. She had a close relationship with her mother and learned Utopian philosophy at Sido’s side. These ideas shaped Colette into an aesthete– always looking, listening, tasting and smelling. She loved the nature outside her door and was always found with a cat or a trusty dog. Despite this idyllic village upbringing, photographs of Colette at this time show a dreamy, feline-faced adolescent looking bored and unhappy. She dreamt of being whisked away from it all and one day it happened. 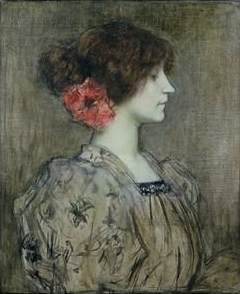 Her provincial childhood ended when she became the twenty-year-old bride of Henry Gauthier-Villars, aged 34. Also known as Willy, this friend of her half-brother was a wit, a literary agent, and a man-about-town whose town was Paris. As attractive as this seemed, Willy was as unattractive outside as he was inside. He was a shameless self-promoter who had a stable of paid ghostwriters. Like an ogre in a fairytale, he actually kept Colette locked inside their Paris apartment until she spun some licentious yarns. Under Willy’s roof, she created a character called Claudine, a saucy schoolgirl based loosely on Colette’s own experiences in Saint-Saveur-en-Puissaye. These stories published under the name Willy were a huge success.

In the early days of the 20th century, it would be hard to avoid the titillating Claudine with her inappropriate girlish infatuations on her female schoolteachers. The ever-entrepreneurial Willy milked the success of the four Claudine books for all their worth, pioneering the marketing spin-off. Soon there were Claudine collars, lotions, ice cream, hats, cigarettes, perfume, and candy. A play, starring the stage phenomenon (and Colette’s doppelganger,) Polaire, was a smash hit. After years of ghostwriting and being subjected to Willy’s look-a-like girlfriends, Colette demanded her own identity, segueing first into Colette Willy and then simply, Colette. 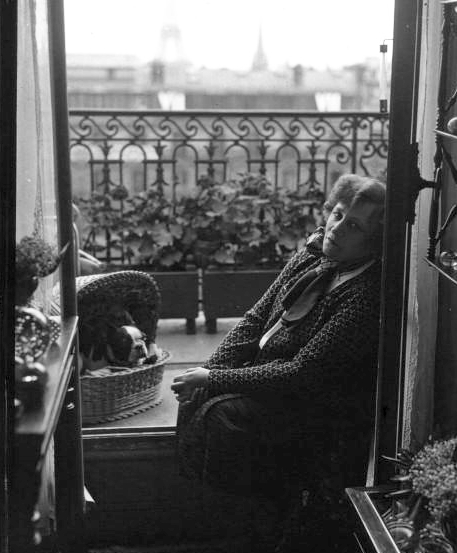 Colette in her apartment at l’hôtel Claridge, no 74 avenue des Champs-Élysées in Paris, in 1932. Photo: BNF/ Public Domain

Now creatively autonomous, she left Willy in 1906 and began a complex love affair with a wealthy cross-dresser, Missy, the Marchioness de Belbeuf. Colette continued to write but topped up her income by embarking on a career as a music hall performer. After some amateur play-acting at the salons of her wealthy lesbian friends, Colette scandalized family and friends when she made her professional stage debut half-naked. Taking to the stage was a blatant form of class betrayal; becoming an actress was synonymous with prostitution.

Colette’s career in vaudeville became a necessity; Willy sold the rights to the Claudine novels, keeping all the profits she had made for him. This was the final straw. Noisy divorce proceeding ensued and Colette wrote a scathing roman à clef in The Vagabond, portraying Willy as an adulterer and artistic fake. 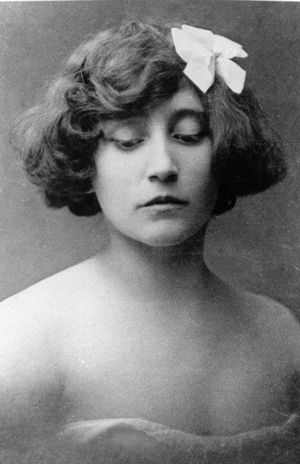 Colette’s notoriety sold seats. Her most shocking stage production was La Chair (Flesh), in which she bared her breasts. On stage at the Moulin Rouge in 1907, she and Missy performed a pantomime called Le Reve d’Egypte. Dressed as a male archaeologist Missy unwound Colette from her mummy-like bindings and kissed her ardently on the mouth. After a riotous reception, the police threatened to shut down the presentation unless Missy left the play.

After her six-year relationship with Missy ended, Colette worked as a columnist for Le Matin. There her articles on drama, politics, fashion, and food brought her to the attention of the paper’s editor-in-chief, Henri de Jouvenel. They married in 1912 and at the age of forty, she and Henri had a daughter whom they also named Colette. The little girl was nicknamed Bel-Gazou, a Provençal word echoing the warbling of songbirds. Colette continued an extraordinarily close relationship with her own mother, sending Sido thousands of letters over the years, but using the excuse of her age and career, Colettes Senior and Junior were not close at all. Appallingly, weeks, even months, lapsed between mother and daughter reunions.

Even more appallingly, Colette, never one for traditional monogamous relationships, began an affair with Henri’s teenaged son from an earlier marriage. This led of course to the breakup of the Jouvenel family. Colette was missing the maternal instinct. 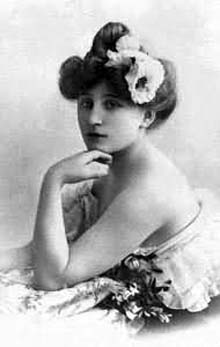 Soon another young man entered her life. Sixteen years younger than Colette, Maurice Goudeket, a Jew whom she would fight to protect during World War II, was the man with whom she would spend her final two decades. Married in 1935 they honeymooned in New York City, sailing on the maiden voyage of the Normandie with Colette under the name Sidonie Goudeket. Along with their menagerie of pets, they lived happily together on the Champs-Élysées and at the Palais Royal; however Colette’s personal life with Maurice is largely unrecorded. During this time Colette, increasingly crippled with arthritis and confined to her daybed, continued to write dozens of new stories and books, including the work she is now most famous for, Gigi.

I was exposed to Colette’s works on the library shelf. These small and brilliant blue copies of the Claudine novels were seldom borrowed but they hooked me. I read everything by and about Colette that I could lay my hands on.

Her descriptions of her life and surroundings were astonishing without being cloying. There was always something to look at and describe. She could wax poetic about a fiddlehead emerging from the earth, or the scent of pine, or the languidness of her cat or her love for her mother.

In “Duo” here is the description made by a cuckolded husband of his wife’s housedress. “This tall blue woman, her blue so soft and washed out, as blue as the moist patch of sky between two clouds, where the first star rises after a shower.”

Colette’s forte was the description of women’s problems in love. Sex was never taboo in her writings, which she embellished with her piquant style. In her clever dialogue, all of Colette’s protagonists reflect the same insouciance as their creator. Some of my favorite Colettes are the Claudines, Retreat from Love, Duo, La Vagabonde and the Ripening Seed. Le Toutounier detailed the relationship between three sisters, all sleeping on couch so commodious it made room for them all. Her memoirs are immensely enjoyable.

Photographs of Colette as an elderly woman portray her as a debonair old lady with hair fluffy as a baby bird, but still with a naughty twinkle in her eye. Poses catch her gazing out her window into the Jardin du Palais Royal below, or tucked into her divan, her “raft,” concerned that her 80th birthday cake has burst into an amazing ball of fire.

Colette was an all-consuming fire, sparking, flaming, raging, glowing, but never burning out. From a doting daughter to a naughty schoolgirl, from a child-bride to a woman of letters, whether a sexual libertine or a theatrical vagabond, she was always, simply Colette.

Purchase some of Colette’s works below: