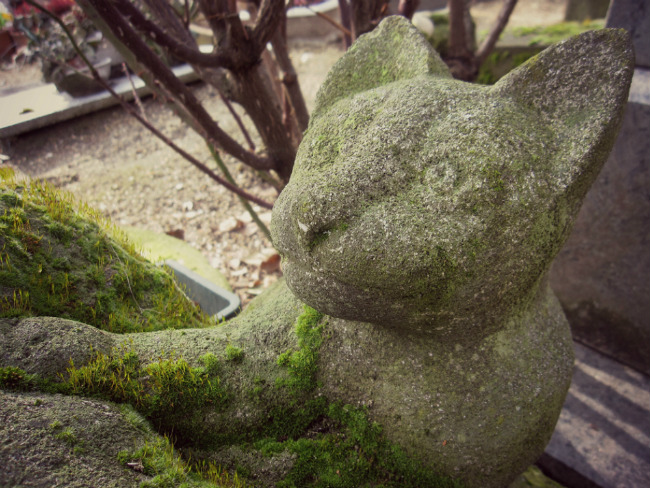 Celebrating International Pet Memorial Day every day, let’s hotfoot it on over a few hot tin roofs to one of my favorite resting spots, nestled in the northwest suburbs of Paris. At 4 Pont de Clichy in Asnières-sur-Seine, the Cimetière des Chiens et Autres Animaux Domestiques is one of the oldest pet cemeteries in the world. Shrouded in decaying grandeur, it’s the Père-Lachaise of pet cemeteries, and a great place to explore rain or shine.

After all, everyone visits Chopin, Balzac, Modigliani, Proust, Oscar Wilde, Edith Piaf, and Jim Morrison, but who spends time with Fifi and Toto? 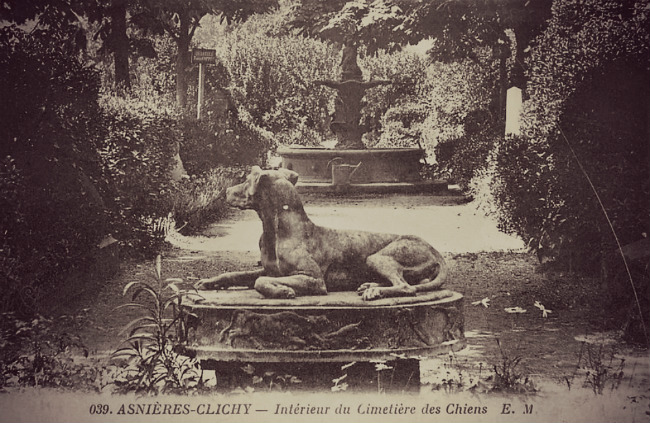 Founded in 1899 by lawyer Georges Harmois and journalist Marguerite Durand

Meow from the other side

After my own sweet kitty left this world for another Fancy Feast, here is where I spent many an hour. Founded in 1899 by lawyer Georges Harmois and journalist Marguerite Durand, the cemetery became a National Landmark in 1987.

By creating a final resting place that was not only hygienic, but also scenic and romantic, the zealous pair of animal advocates offered a healthy alternative to the then-common practice of dumping pets in the Seine or in trash bins, or scattering their ashes in the Médici Fountain at the Jardin du Luxembourg. (I’m surprised Marie de Médici didn’t put a hex on them for that!) 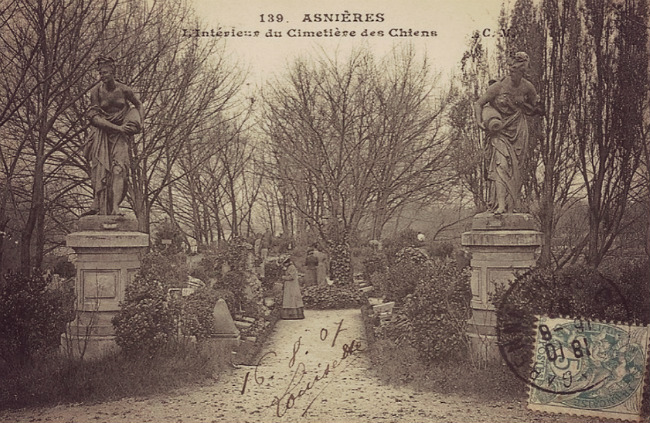 Within 8 years after the launch, 4,000 pets had been buried in the Cimetière des Chiens. Image: T. Brack’s archives

At first, not everyone was a believer. “The Paris Dog Cemetery is not regarded as a howling success,” one wet blanket journalist punned, not long after it opened its creaking gates for the first time.

However, sometimes it’s true that when you build it, they do flock. Within eight years after the launch, 4,000 pets had been buried in the Cimetière des Chiens. By 1934, the number had jumped to an impressive 20,000. Picture postcards were printed, sold, and circulated, showcasing the bantam burial ground in all its dappled glory. Pumping up the publicity volume still more, Marguerite Durand placed advertisements in her own feminist newspaper, La Fronde. 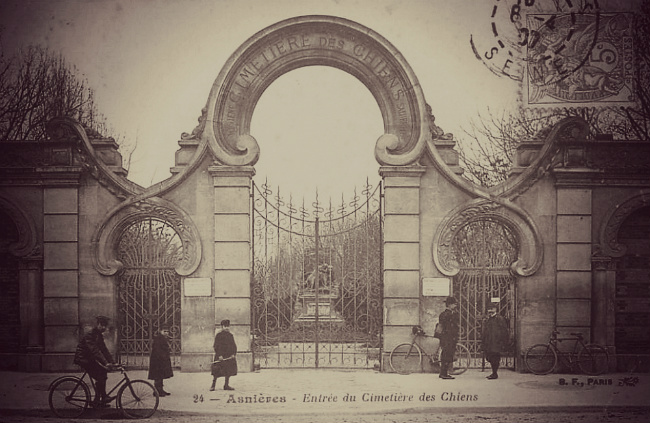 I always love a good pet story, so whenever I spot one, naturally my ears perk up. By now, some 40,000 pets have been buried here, so there’s a tale at every bend. After passing under the Art Nouveau entrance designed by Eugene Petit, I’m greeted by a monument to the heroic Saint Bernard, “Barry.” Between 1800 and 1812, the inscription reads, Barry rescued 40 people caught in blizzards in St. Bernard Pass, a famously dangerous route through the Alps between Italy and Switzerland. Sadly, Barry died while trying to save the life of the 41st victim claimed by the snows.

Next, I follow the well-worn dirt path past Barry’s massive monument to enter a maze of moss-covered tombstones, urns, and sculptures dedicated not only to cats and dogs, but also to birds, rabbits, mice, hamsters, horses, monkeys, turtles, fish, sheep, foxes, and at least one shark. 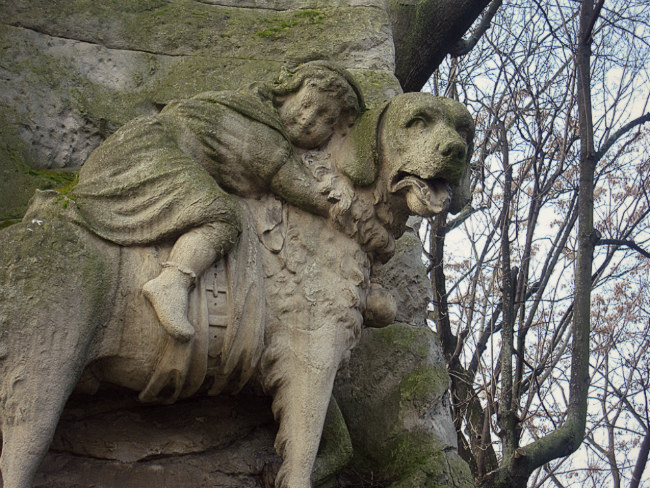 Between 1800 and 1812, Barry rescued 40 people caught in blizzards in St. Bernard Pass. Photograph by Theadora Brack

Dozens of stones later, knee deep in a virtual Noah’s Ark of the Dead, I spy “Dolly,” a savvy parachute jumper and message carrier for the French Resistance in World War II. Close by her is the final resting spot of the original “Rin Tin Tin,” already a hero of the First World War before becoming the ruggedly handsome silent movie star. Continuing the cavalcade of military markers, here too is Napoleon’s favorite three-legged, self-taught boy wonder, “Moustache,” along with Marguerite Durand’s own pet lion, whom she had perversely named “Tiger.” Oh, my.

Collapsing on a bench, I sit gazing out on this field of heartfelt gestures. The cemetery will be closing soon, and it’s already getting hard to see the epitaphs in the waning light. Surrounded by all these stone restatements of the human-animal bond, it’s quiet enough to hear a Milk Bone drop. The gurgling of the river passing by on both sides of the island both soothes and re-energizes me at the same time that it makes me pensive.

Where is the love?, I wonder. In your lap, I suddenly realize, sitting, always flitting. Rest in peace, little critters, ever more.

As one epitaph here wisely put it, “Bijou was not very large but he had good teeth.” 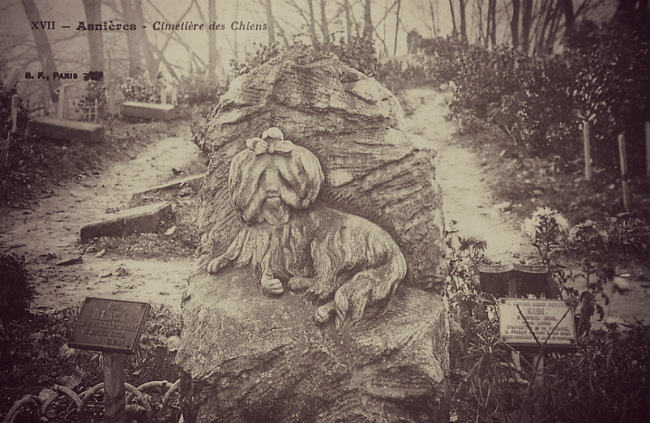 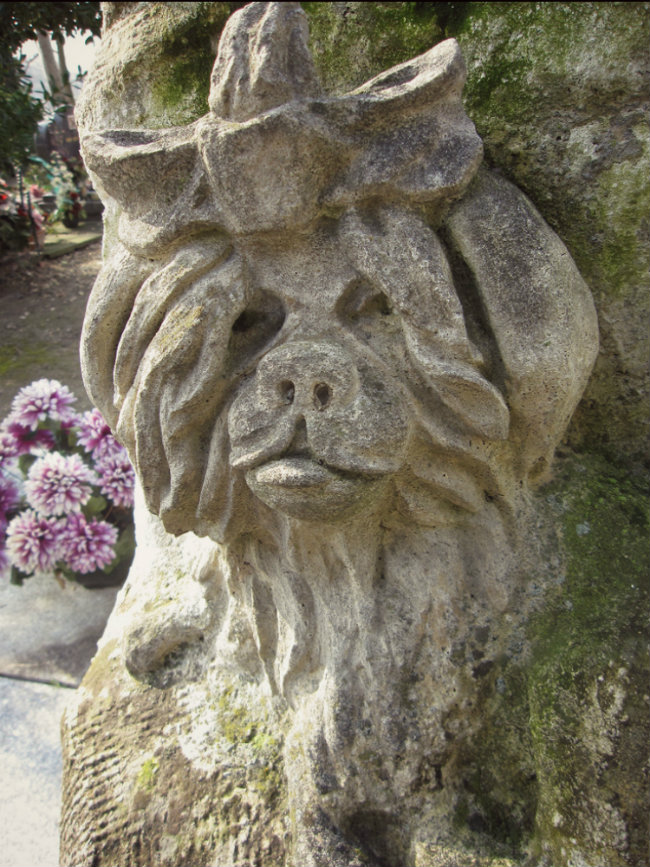 Everyone visits Jim Morrison but who spends time with Fifi? Photograph by Theadora Brack 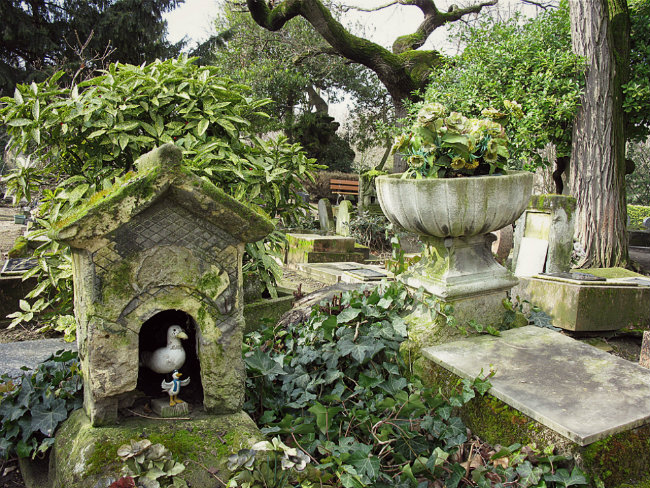 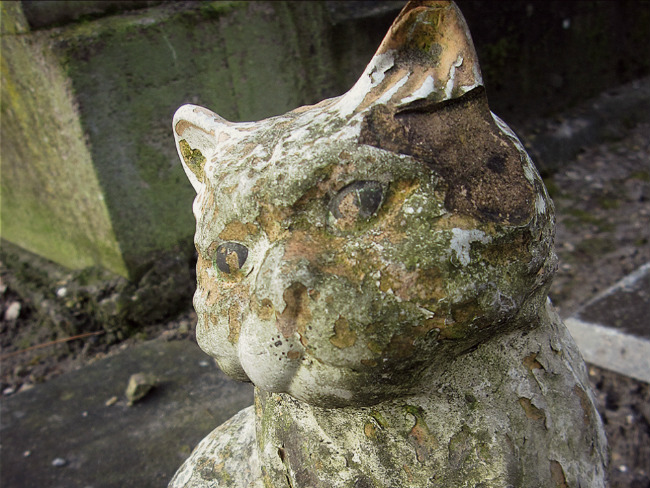 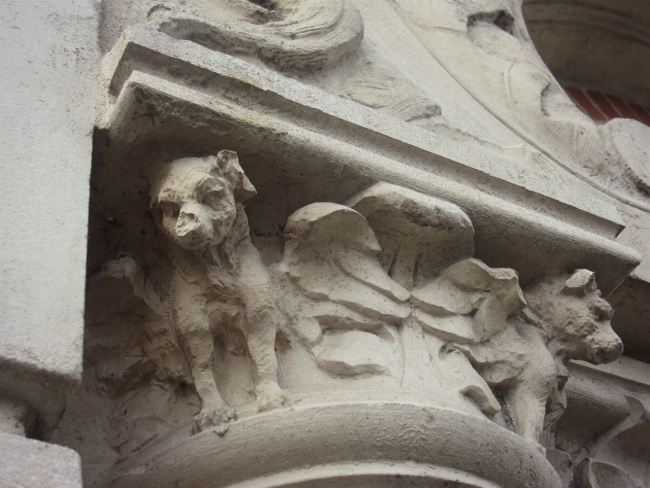 How much is that doggie at the entrance? Photograph by Theadora Brack 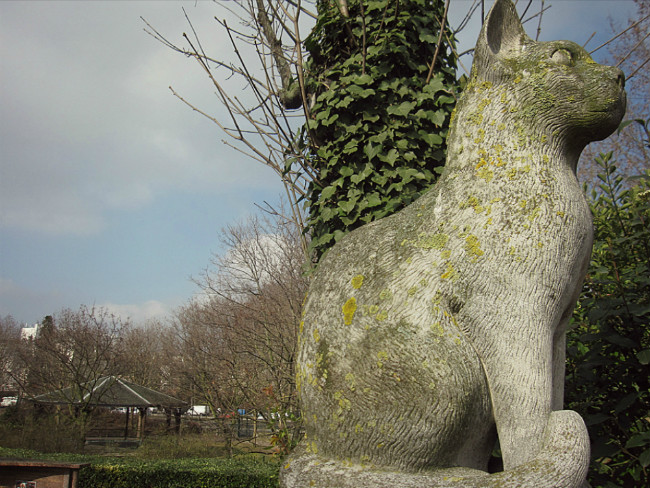 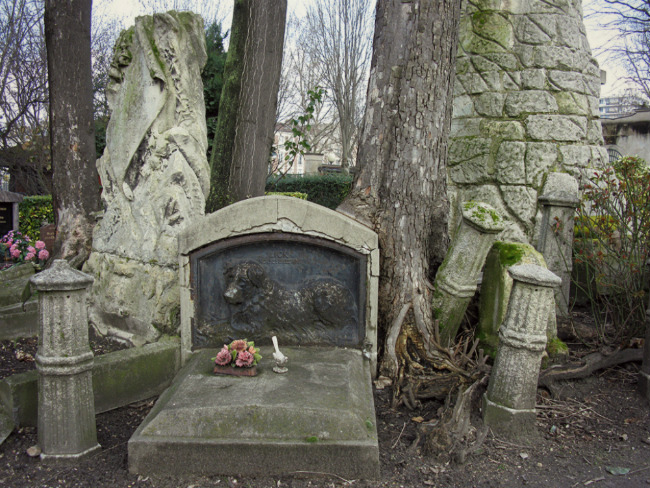 Celebrating the annual Pet Memorial every day in Paris. Photograph by Theadora Brack 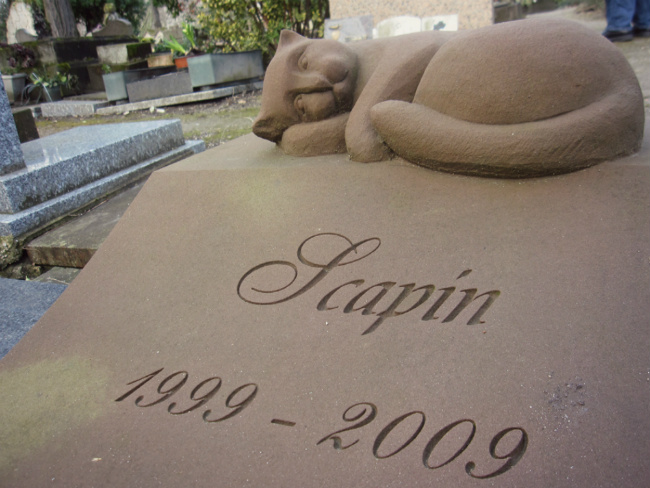 Memory, All alone in the moonlight at the Cimetière des Chiens. Photograph by Theadora Brack 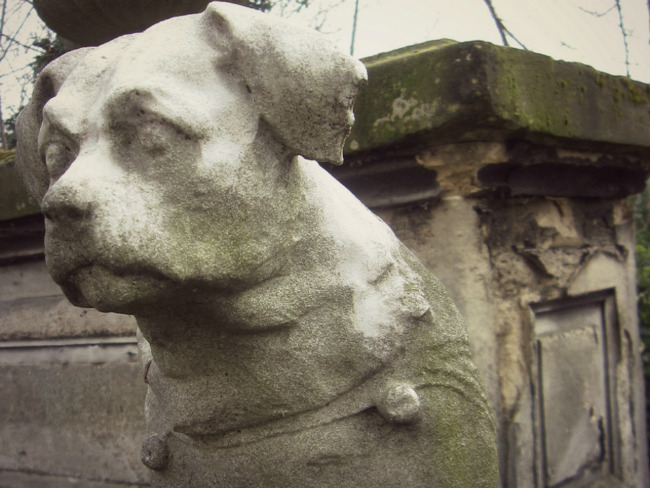 Howl from the other side. Photograph by Theadora Brack 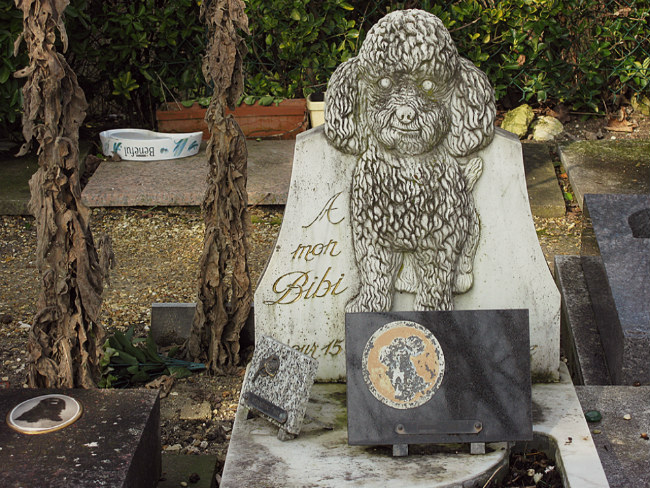 We can see your halo, Bibi. Photograph by Theadora Brack