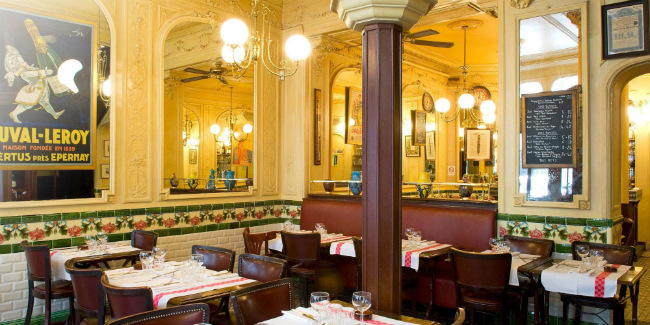 Aux Lyonnais, originally a coal and wood depot, was created in 1890 by the Fouet family, who sold their wines in barrels on the street outside. Fast forward to 1918 when Daniel Violet took over and transformed the depot into a successful Paris bistro serving Lyonnais specialties. Alain Ducasse was enchanted with the space, and its history, when he took over in 2002 with his friend, the late Thierry de la Brosse of L’Ami Louis. “Lyonnaisse cuisine will always have a place in my heart; I served my apprenticeship in Mionnay with my “spiritual father” the late Alain Chapel,” he recalls.

With this in mind, Monsieur Ducasse has decided to explore the history of Lyon’s legendary “Mothers of Invention”– as it was the mères Lyonnaises who originally helped forge Lyon’s reputation as France’s culinary capital. “Their restaurants were converted grocery stores, using borrowed chairs! The city was hailed as “Gastronomy World Capital” by culinary critic Curnonsky in 1935,” he adds.

So, until Christmas this year, Aux Lyonnais– the authentic, retro-chic bistro in the second arrondissement– pays a loving gourmet tribute to three generations of Mères Lyonnaises who inspired so many chefs. Heading the kitchen is chef Francis Fauvel, formerly or Lasserre and Le Louis XV in Monaco. He’s been recognized for the authenticity of his cuisine by Bouchon Lyonnais. Here are the six dishes that you’ll find on the menu.

In 1759, Mother Guy built the reputation of her guinguette on the banks of the River Rhône, with her signature matelote dish prepared with eels caught by her husband. One century later, her granddaughter “La Génie” turned the small riverside café at 35 Quai Jean-Jacques Rousseau into a fine establishment awarded three Michelin stars in 1936.

The pike, cooked in a red wine fish fumet, is accompanied by smoked bacon, pearl onions and button mushrooms, garnished with spinach fondue.

“Those who sing during dessert are kindly asked to not climb on the tables!,” requested the mother-chef at 73 rue Duquesne. This woman, with a firm grip on all things culinary, is said to have only used two knives over 30 years to carve, at table, the 500,000 chickens prepared in “demi-deuil”. The signature dish, with slivers of truffle inserted between skin and flesh, alternating black and white, explains the term ‘half mourning’, a period following the all-black dress of full mourning when it was acceptable for widows to alternate black and white or grey clothing.

An aromatic creamy crayfish fumet coats the crayfish tails, arranged with a few spinach leaves. Matched with Domaine Thénard White Burgundy from Clos du Cellier Aux Moines (12€ by the glass or 36€ for the carafe).

The Blanc dynasty begins in 1872 and continues for three generations. Culinary critic Curnonsky dubbed Elisa Blanc, “the best cook in the world.” Chef Georges Blanc whose restaurant in Vonnas is the seat “of a dynasty of great chefs.” He was profoundly influenced by his grandmother Élisa, known as Mère Blanc.

“If the United Nations got together around Mother Bourgeois’ table, they would be the Nations the most united and happiest of associations!” was the message from Louis Barthou, France’s then Foreign Affairs Minister. In 1933, Marie Bourgeois became one of the first women to receive three Michelin stars for her restaurant in the Priay, in the Rhône-Alpes department of Ain..

The delicious tribute dish by the chef Fauvel: Warm Pie

“Aux Brazier ardents”…is the poetic dedication from Jacques Prévert in the golden book of Eugénie Brazier, the first woman awarded six Michelin stars for her Lyon restaurants, recognized as a very high achiever, and who taught Paul Bocuse, her young apprentice, the culinary arts.

An artichoke heart on a bed of crispy mesclun, a dressing of tangy herbs, slices of tender terrine de foie gras delicately laid on top.

The tribute dish by the Francis Fauvel: “Tablier de sapeur”