Artists in Paris: The Tragic Life of Amedeo Modigliani

On the 24th of January 1920, after a life of poverty, Modigliani died penniless.

Born into a Jewish family, in Livorno, Italy in 1884, Amedeo Clemente Modigliani was the fourth child of Flaminio Modigliani and Eugénie Garsin. His father’s business as a money changer had failed and the family were subsequently living in dire poverty when Amedeo was born. Indeed his birth helped save some of the family’s precious possessions as Italian law stated that creditors could not seize the bed of a pregnant woman or mother with a newborn child. The Modigliani’s assets were piled on top of the expectant mother, preventing creditors from repossessing the family’s goods. 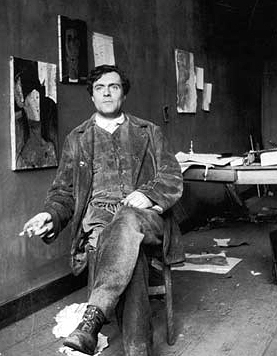 Amedeo was very close to his mother who taught him until he was ten years old. He contracted pleurisy when he was 11 years old and later typhoid fever. However it was tuberculosis, then an incurable disease, which was to plague Modigliani his entire life.

With refrains of Toulouse-Lautrec (who later influenced the artist in Paris), Modigliani drew and painted from an early age. After his first attack of typhoid fever, his mother enrolled him with the best painting master in Livorno, Guglielmo Micheli. Mogdiliani, despite being classed in the landscapes of Renaissance painters, preferred to paint indoors: portraiture and nudes.

From Florence, Modigliani moved to Venice while still suffering from tuberculosis. It was in Venice that he was reputed to have tried hashish for the first time thus taking his first steps towards the decadent life style he embraced enthusiastically for the next 18 years. 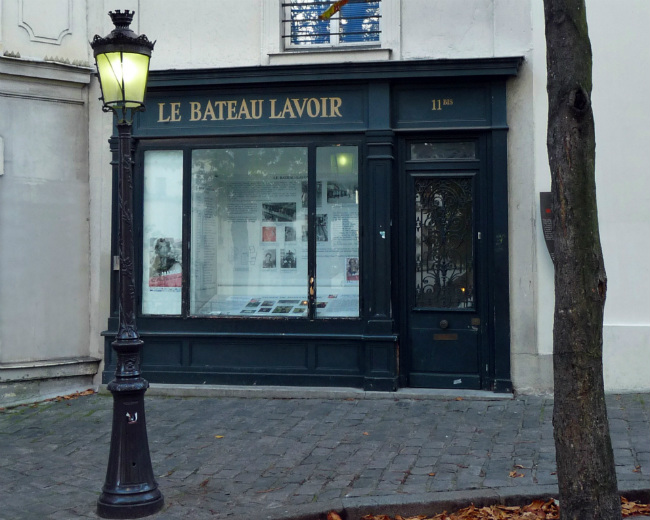 Paris was the inevitable destination for a young artist with Modigliani’s propensities, and in 1906, Amadeo moved to the Bateau Lavoir, the commune for penniless artists in Montmartre, renting a studio in Rue Caulaincourt.

At first, Modigliani was known for his rather dapper appearance, unlike his more bohemian counterparts. His studio was hung with plush drapes and the walls hung with Renaissance reproductions. He complained in a letter to his mother of his disappointment of seeing Picasso, whose work he admired, walking around the quartier in work man’s clothes.

Before 12 months were out, Modigliani’s appearance (as had his studio) had changed dramatically. He was described as a sort of ‘Prince of Vagabonds’. He was also a drunk and a drug addict. 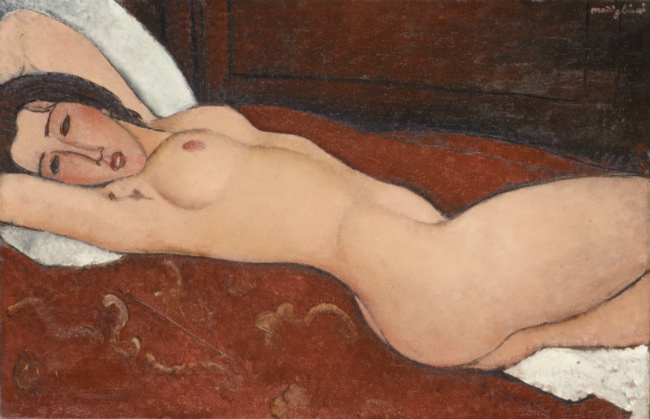 Reclining Nude, 1917, in The Metropolitan Museum of Art/ Public Domain

Modigliani was often described as debauched and self-destructive. His affairs were legend, his behavior, even by the standards of Montmartre, was outrageous. He was known to have sometimes stripped naked at social gatherings. An explanation for his head-long rush into this extreme hedonistic and harmful life style has been posited that his tuberculosis was the main factor. A diagnosis of tuberculosis was the presumption of an early death. There was no cure and rather than be presented as someone with TB and suffering its consequent stigma, Modigliani preferred that people blamed his wildness and frequent illnesses on his shocking lifestyle.

With their elongated, melancholic faces and bodies, Modigliani’s paintings– at first influenced by Toulouse-Lautrec and Cézanne– were also inspired by African art. However, Modigliani had a style all his own, showing his fascination with the human form and physiognomy. He deliberately distorted the figure… although the portraits still resembled the sitter. The surfaces of the paintings were smooth and thinly painted, suffused with melancholy. His paintings of erotic nudes as with his portraits were unmistakeably recognizable as Modigliani’s work, and although appreciated at the time by his contemporary artists in Montmartre and later Montparnasse, Modigliani could barely scrape a living from them. 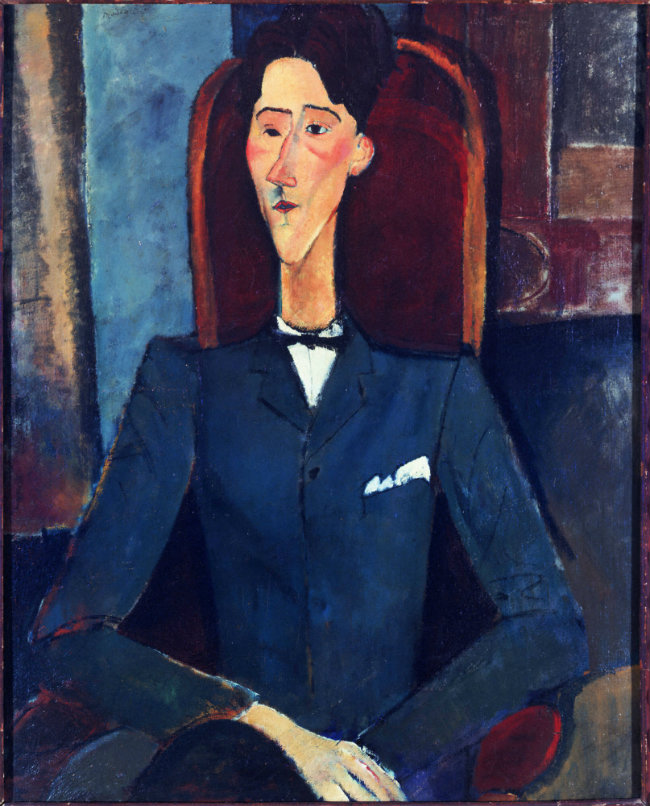 In 1909, wearied and ill from his excessive lifestyle, Modigliani returned briefly to Livorno. He soon returned to Paris, renting a studio in Montparnasse. Here, with the encouragement of Paul Guillaume and Constantin Brancusi, Modigliani began sculpting again. By 1914, he had abandoned sculpture and returned once again to painting. Modigliani’s series of portraiture at this time was impressive. He painted friends and artists in Montparnasse, including Picasso, Diego Rivera, Juan Gris and Jean Cocteau.

In 1917, Modigliani was introduced to a beautiful 19 year old art student, Jeanne Hébuterne. Jeanne was a Roman Catholic from a very conservative, bourgeois family. Her family, who considered Modigliani as no more than a debauched drunk, immediately renounced Jeanne.

Despite this, Jeanne quickly became Modigliani’s common law wife, although it is doubtful that Modigliani’s behavior was tempered by their union, as their very public scenes became as renowned as Modigliani’s drunken exhibitions.

In the same year, Modigliani had his first, and only, one-man exhibition which opened at the Berthe Weill gallery. Sadly, Modigliani’s nudes so scandalized the Chief of Paris Police that he forced the closure of the exhibition after a few brief hours.

In 1918, another brief respite from Paris, this time in Nice, where their daughter, named Jeanne was born. By May 1919, Modigliani and family were back in Paris in the Rue de la Grande-Chaumière. By now, Modigliani’s health was deteriorating rapidly. He had never attempted to slow down on his self-destructive lifestyle or modify his drug use or alcohol consumption in any way and his alcoholic blackouts were increasing. 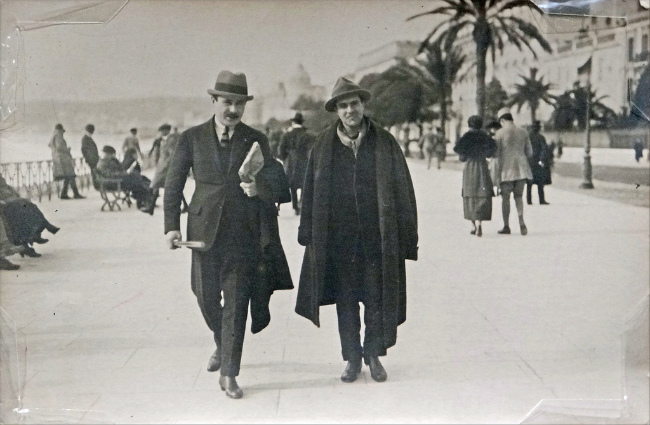 In 1920, a neighbor, concerned that she hadn’t seen Modigliani or Jeanne for a few days went up to check on them. She found Modigliani delirious and holding onto Jeanne who was almost 9 months pregnant.

On January 24th, 1920, Modigliani died of tubercular meningitis. The funeral was enormous, attended by friends and artists from Montmartre and Montparnasse. He was buried in Père-Lachaise cemetery.

Jeanne Hébuterne was taken to her parents’ house. There, two days later, she threw herself from a 5th floor window, killing herself and her unborn child. It was not until 1930, 10 years later, that her embittered parents allowed her remains to be taken from the Cimetière Parisien de Bagneux to rest beside Modigliani in Père-Lachaise cemetery. 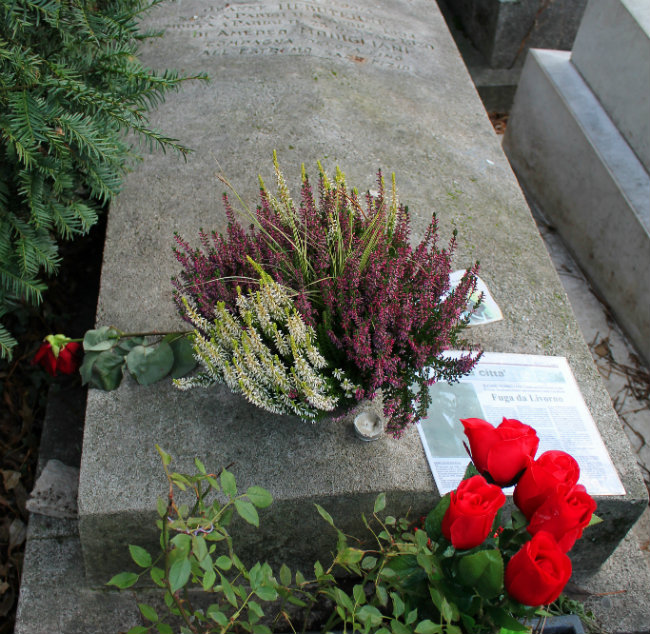 Previous Article Drinking Whiskey in Paris: Getting into the French Spirit
Next Article It’s Curtains for the Pinacothèque de Paris