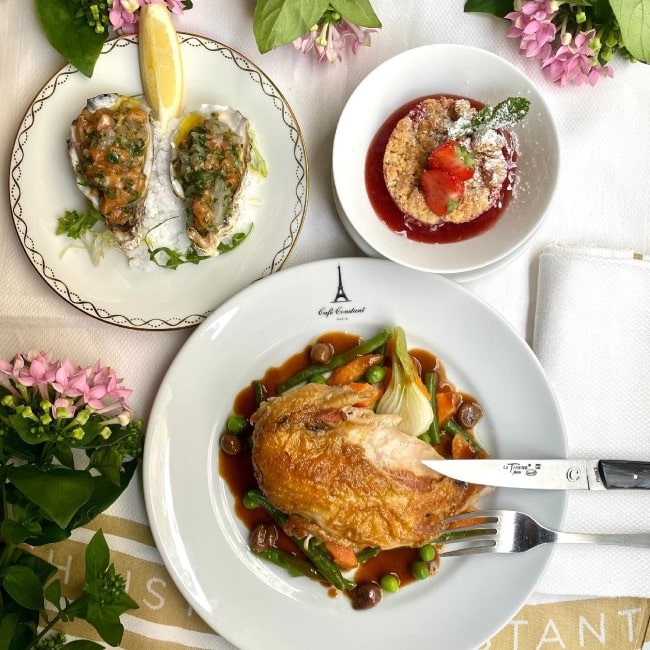 Yay! Restaurants and cafés are opening soon. The government plan is to open café terraces from Wednesday, May 19th. Inside eating from 9th June. In the meantime – here’s some table talk to whet your appetite.

“Yes, it’s true!” Christian and Catherine Constant confirm. “We’ve sold to Cyril Lignac as Christian plans to retire soon. Cyril made the point with Christian about 3 years ago saying, ‘if you ever sell I’m your man.’ And he was! No quibbling whatsoever- a pleasure to do business with! CC’s very happy that it’s passing on to him (end of September) and Lignac says he doesn’t want to change anything, keep it as a good corner café – if it ain’t broke why fix it?” Nice one, Cyril! At present  you can order takeaway Click & Collect or via Deliveroo.

Head to Argentina by unpacking “Lovely Morning.” Then on to Morocco for a reviving green tea à la menthe. The classic Earl Grey transports you to England! Then, in a few sips, you’re off to South Africa with “Rooibos Vanille” and then India with “Only Spices.”

There’s romantic stopovers in Russia with “White Anastasia,” then Inès invites you back to her Provence maison for “AquaSummer,” a peach-apricot infusion. And, back in Paris with “Happy Mind,” an organic herbal tea. “In these times of confinement and curfew here’s a great way to travel without leaving home, n’est ce pas?” she says.

The Inès de la Fressange Paris flagship store is temporarily closed due to government directives but delivery is possible by calling 01 45 48 19 06 or 07 49 86 19 52. Nestled on the Left Bank, between the chic 6th and 7th arrondissements, a former bronze foundry is home to the flagship boutique at 24 rue de Grenelle.

Where to find? Via click & collect, pick up at Shabour restaurant
19 rue Saint-Sauveur, 2nd

Following a €750 million + transformation, the former La Samaritaine department store, acquired in 2001 by the prestigious LVMH group, should be open for business by May 28th, depending on government directives.

In its former life, Parisians would sigh, “one finds everything at La Samaritaine.” Today, shopaholics need never go home but check into the Cheval Blanc Hotel, with 72 rooms (from about €1150) and suites (one with a 12-meter pool), designed by architect Peter Marino. Panoramic views overlook le tout Paris, plus there’s a Dior Spa and gastronomic restaurant helmed by *** Michelin chef Arnaud Donckèle with pastry chef Maxime Frédéric.

And, on the seventh floor, Langosteria opens its first restaurant outside Italy with indoor/outdoor space and the picture postcard Paris skyline as USP (unique selling point).

Named for the pump used to supply water to the nearby Louvre from 1608 to 1813, La Samaritaine pump was embossed with a sculpture of Samaritaine – a woman from Samaria in Palestine reputed to have given water to Jesus on his way to the crucifixion.

Meanwhile, the French Open will host up to 1,000 spectators on the main Philippe Chatrier Court from May 30th. Sport’s Minister Jean Michel Blanquer also confirms that this limit should be increased to 5,000 – a third of the 15,000 capacity of the stadium – for the quarter finals on June 9th – as long as there’s no deterioration in the nation’s health situation.

Previous Article Letter from Paris: May 12, 2021 News Digest
Next Article The Cocktail Bars of Paris: A Guide by Arrondissement