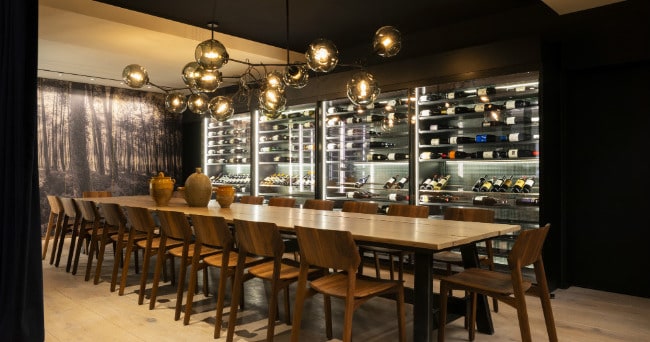 “Food is about sharing something inside you, giving a little bit of yourself.” –Hélène Darroze

Hélène Darroze reboots and renames as “Marsan” her eponymous ** star Michelin restaurant on the Left Bank, honoring her hometowns of Villeneuve-de-Marsan and Mont-Marsan, in the Landes region of southwest France. It’s already noted by the savvy suits at Guide Michelin (2019): “a modern cuisine, which moves with the seasons!”

“I really wanted to start from scratch, but Michelin insist I keep one star, which is a puzzle to me. Marsan continues the history of my family, every last detail here has emotional meaning to me,” explains the cheffe just before the relaunch. “I haven’t slept for weeks,” she confides. 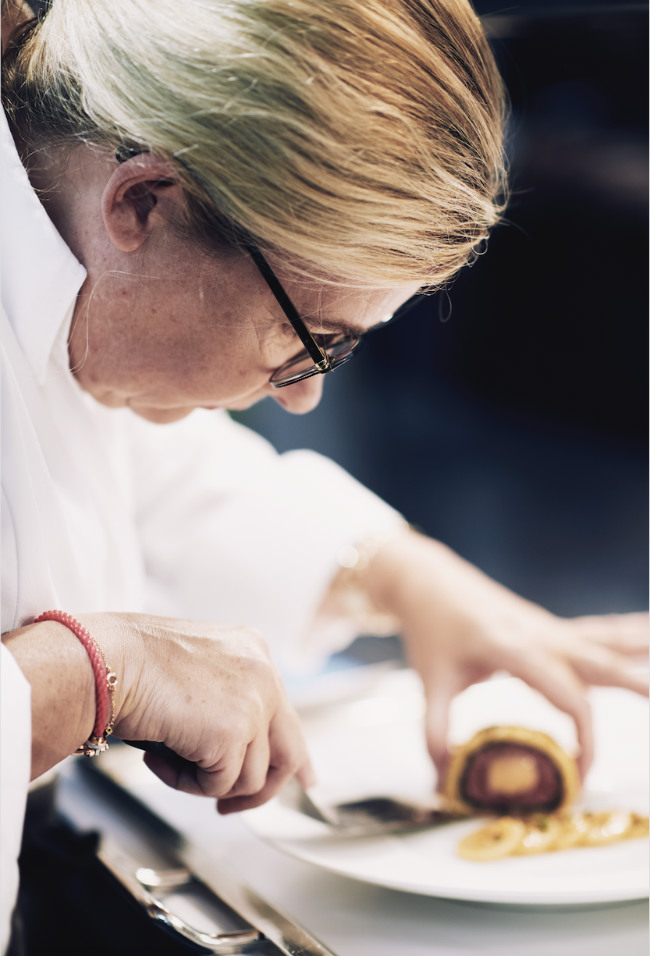 As you enter, to the right, a floor-to-ceiling “designer” map of the Marsan region punctuates the wall. Over two floors, the bright new contemporary soft pink and white décor’s by architect, and bestie, Patrice Gardera, showcasing a round table d’hôte overlooking the gleaming steel and gold kitchen – a private dining room hosts 6 lucky diners. “But they don’t have to wash the dishes,” the cheffe jokes.

Wild spring flowers decorate the tables. On Marsan’s menu, begin with a consommé of asparagus and tarragon, “to clear the palate”. Then a giant oyster with caviar and coco velouté. Tandoori style lobster is cut with carrot and citrus fruit mousseline, Lampong pepper. Marinated and smoked leaves of Ardour salmon, a touch of rhubarb– perfect with champagne by Eric Rodez, Ambonnay. Ciboure Merlu (hake) white asparagus from Soustons village, petit pois, clams, a dab of egg yolk.

For the main, choose Grandfather Darroze’s recipe for grilled pigeon, which has the cheffe’s modern twist of beetroot, cherries and mole poblano (Mexican style chile and chocolate sauce). Cheeses, presented on magnificent big wheel trolleys, is from chez Benat in the Saint-Jean-de-Luz market. 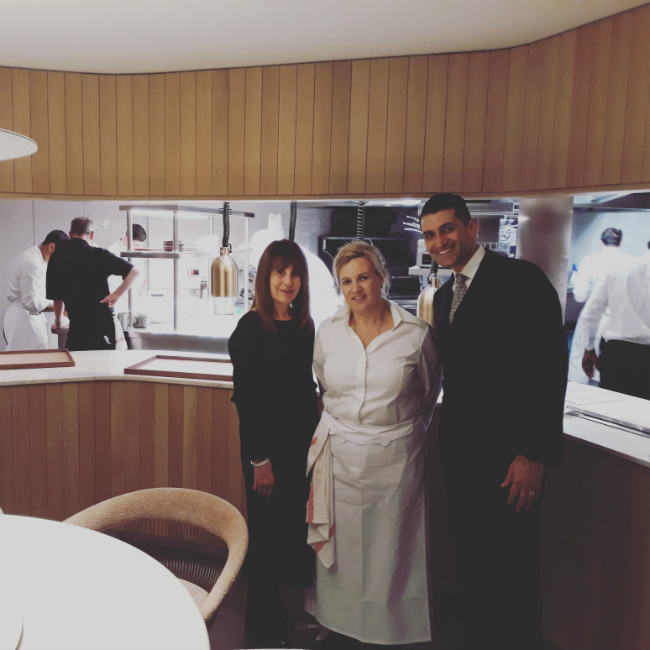 Wines, such as the fruity Cahors from Mas de Périé, are from the Southwest. And there’s the collection of rare Armagnacs bottled by brother Marc Darroze.

Born in 1967 in Mont-de-Marsan, Hélène Darroze grew up in a family of hoteliers. In 1895 her great-grandfather opened the Auberge Le Relais in Villeneuve-de-Marsan. Since then, the passion for gastronomy has passed from generation to generation in the Darroze family. Determined to follow in the footsteps of her predecessors, Darroze enrolled at Business School, Bordeaux mastering the art of the hotel industry and company management.

After graduation, with her diploma in her pocket, cheffe passed three years with Alain Ducasse at the prestigious Louis XV restaurant, Monaco. “I was in administration, but Monsieur Ducasse encouraged me to start cooking; the rest is history,” she laughs. 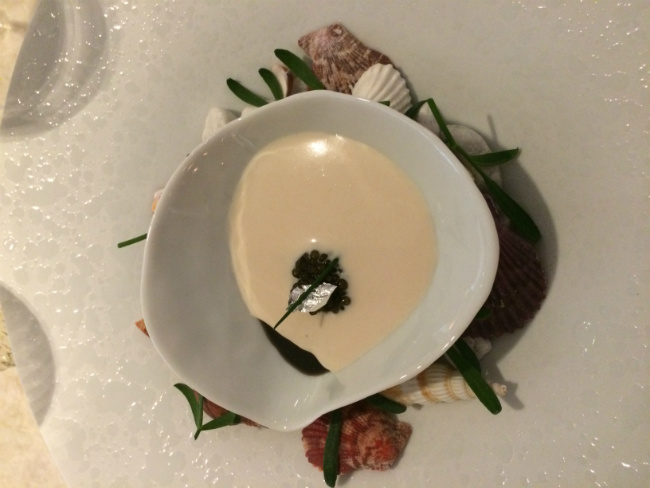 In addition to Paris, Darroze is Executive Cheffe at The Connaught, London where she has **Michelin stars – and is obviously a Eurostar frequent traveler between cities. Since 2015 Darroze, the inspiration for Colette in the 2007 film Ratatouille, has added her invaluable input to the jury of M6 TV’s Top Chef, the tele-reality program, together with Philippe Etchebest, Michel Sarran and Jean Francois Piège.

A single mother of two adopted Vietnamese daughters, Charlotte (born in 2007) and Quitterie (in 2010), cheffe Darroze was dubbed Knight of the Légion d’Honneur by Nicolas Sarkozy in 2012. 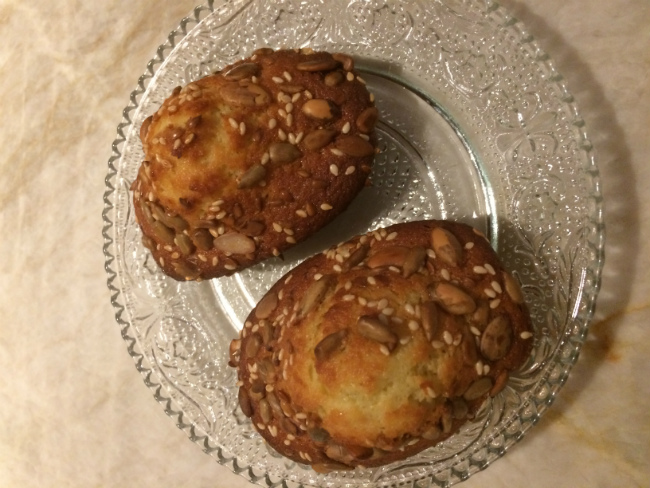 “To understand me, read my book (Personne Ne Me Volera Ce Que J’ai Dansé – published in 2005 by Editions Cherche Midi). It’s the romantic story of a young cook who dedicates recipes to the man she loves. This woman is happy some days, sad on others, she can be bubbly, tortured, cheerful, envious, generous, aggressive, just like a woman in love. I may be that woman! For those who know me, the similarities are obvious. The cook shares my passion for cooking, bien sûr!”