Ask any tourist with half an idea of the geography of Paris the following question: “Where is the Chinatown?” And he or she would probably answer “In the 13e arondissement.”

Certainly a large and bustling Chinatown is available for the prowling in the 13e. Situated in and around the convenient “Triangle de Choisy,” a triangular plot of land created by the crossing of three large roads (Avenue d’Ivry, Avenue de Choisy, and Boulevard Masséna) and accessible by several metro stations (Porte d’Ivry, Porte de Choisy, Tolbiac, Olympiades). This is definitely the biggest of the Asian quarters in Paris. And not without good reason. This area is home to the largest Asian supermarket in the city, “Tang Frères,” as well as dozens of smaller markets and fantastic restaurants. But Paris doesn’t boast only one Asian quarter; there are several others. They are less expansive but not any less energetic. One such example is the Asiatown in Belleville, a small quartier way up in the Rive Droite.

Belleville is full of small shops and markets but its distinguishing feature is its wonderful restaurant scene. Of course, being Korean and wanting to eat food that wasn’t creamy potatoes or thick stew, I jumped at the chance to explore this area of Paris. Although French food is always delicious, there is always a hollow in my stomach and a tickle on my tongue for the tastes of Asia: a clean spicy kick, a salty-savory broth, and slick rice noodles.

The place that I decided to try satisfying my cravings (after pondering the several possible choices for a long time) was a Vietnamese restaurant called Dong Huong located right off the metro stop Belleville. It wasn’t hard to do—there was a large neon sign with an arrow pointing down at it. But that was the only conspicuous aspect of the restaurant; without it, people might just walk by. 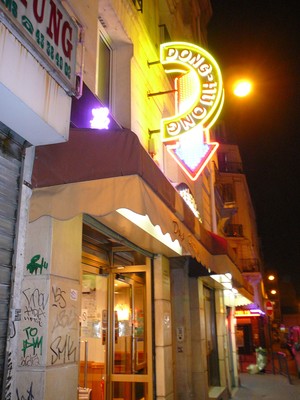 Dong Huong has the look and feel of a modest Vietnamese restaurant, unassuming cutlery, simple wall decorations, etc. It is unpretentious and economical, as most inexpensive restaurants are. However, it is clearly apparent that this particular restaurant’s unimpressive approach to the décor doesn’t stop people from coming in. The restaurant boasts three rooms for diners to sit by the grace of some restaurant renovation. It looks as if the restaurant removed the wall in-between the main dining rooms to make more space. To me, that is a good sign. If not even two rooms couldn’t hold all the hungry diners looking for a good meal, then this place had to have something going for it. 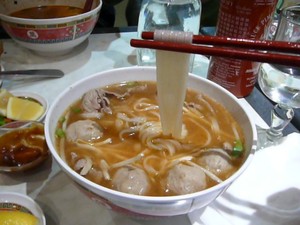 I sat at one of the tables and ordered one of my trusty favorites: pho with boulettes of meat and slices of just-cooked beef. It came surprisingly quickly, steaming vigorously and smelling like fresh coriander. With the noodles came a heaping plate of soybean sprouts and leafy greens to mix with the soup. The server barely placed the bowl on the table before I dove into the pho.  After a few vigorous helpings of spicy sriracha sauce and a dollop of a tangy-sweet brown sauce, the balance was perfect. And at only around 7.20 euros a bowl, I didn’t need to feel guilty about splurging on a delicious dinner.

Pho isn’t the only thing on the menu. For those who aren’t “soup” people, Dong Huong has omelets, rice dishes, and cold noodles to satisfy any picky eater. Also, I didn’t have the time or means to grab myself a dessert that night but there were some very tempting choices listed:  Sweet red bean dessert drinks, ice cream-filled rice cakes, fruit sorbets, etc. But a small warning to those who are vegetarian or vegan—there might not be many choices available for those who dine solely on greeneries. Mostly everything on the menu contains meat. However, if one asks nicely, accommodations can be made to allow for a vegetarian meal.

Dong Huong is a fantastic little restaurant that is unassuming in looks but packs a powerful menu of traditional Vietnamese cuisine. The combination of ease of access, a delicious menu, and inexpensive meals makes Dong Huong the go-to in Belleville for Vietnamese food. The next time you’re hankering for Asian-style cuisine and are too far into the Rive Droite to head down to the Triangle de Choisy, be sure to give Belleville a try! And if Vietnamese food is the poison of your choice that night, Dong Huong with its blaring neon sign will definitely be able to satisfy that nagging craving.