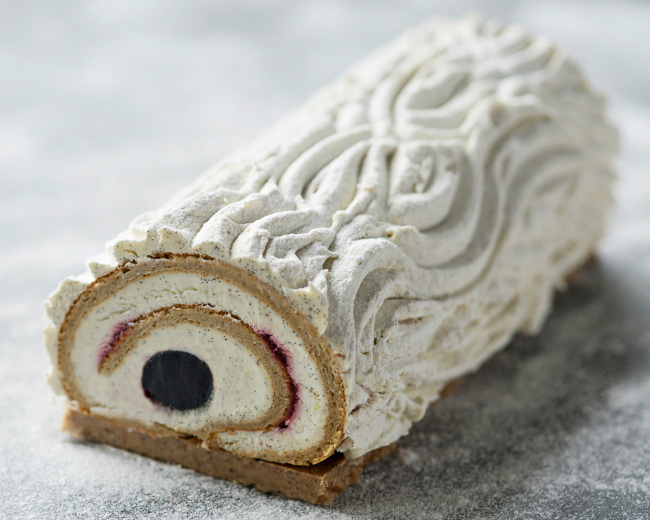 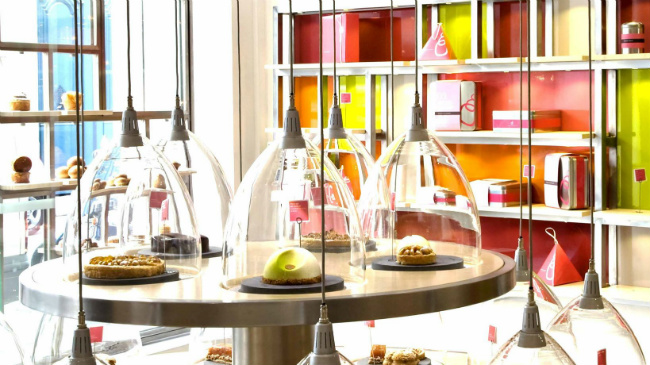 A touch of Christmas magic came early to Paris this week with a tasting of not one but three new French Bûches de Noël Yule Logs launched by the Pâtisserie des Rêves.

Just walking into the pink pastry boutiques of La Pâtisserie des Rêves in Paris reminds me of that enchanting scene in the film, Mary Poppins; as the family jumps on a carousel, wooden horses take off and they ride in the air to discover a cartooned magic kingdom, then sip tea from porcelain cups.

But imagine opening up a secret door into a delightfully real theatrical world – with oversized glass bells announcing an ever-changing line of exquisite pastries, giant pink spiral lollipops standing to attention in jars, with a pile of humped-back madeleines, buttery-rich financiers and viennoiseries all sitting on the counter. It’s no surprise that children are also the focus of attention here, with special goûter (a French afternoon teatime snack) days organised especially for the little ones.

Literally the “Patisserie of Dreams”, the unique concept was born in 2009 when chef Philippe Conticini and theatre/hotel entrepreneur, Thierry Teyssier (owner of Maison des Rêves), partnered their talents together to create the first pastry shop on Rue du Bac. Over the last six years, the internationally acclaimed pastry chef and creative artistic director have aimed at rekindling precious childhood gourmet experiences to create a memorable magic experience in pastry for the next generation.

Chef Conticini aims at awakening the senses by modernizing traditional French pastries with his own magical touch of surprise. The signature Saint Honoré, Millefeuille, seasonal tarts, and Paris-Brest pastries have global gourmets queuing in his Pâtisserie des Rêves boutiques from Paris to Japan and now in London. 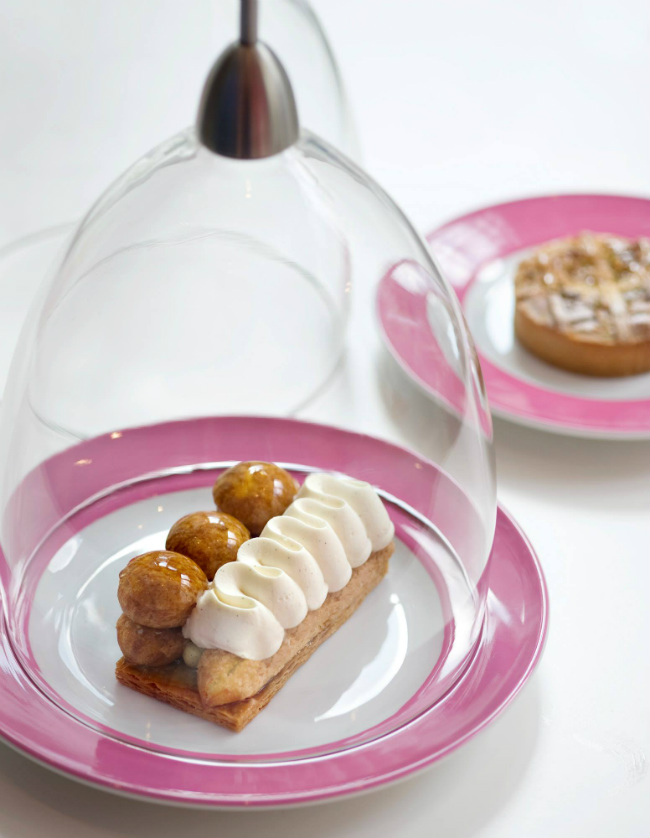 Today Philippe Conticini is not only one of the world’s most prestigious contemporary pastry chefs, he’s also one of the rare chefs to have also achieved a high-level cuisine career in the savory world. He literally grew up in the kitchens of his parents’ restaurant, southeast of Paris in the Val-de-Marne area, and by 1986 was co-owner of the Table d’Anvers until 1998, catching a Michelin star along the way. During that time (1994) he was creator of the verrine: instead of serving dishes horizontally on plates, they’re served vertically in transparent glasses – a brilliant idea now copied the world over. (Verrines are also a brilliant way to easily transport desserts.)

The turning point came ten years before the Patisserie des Rêves– when Conticini shot to international fame while working at Petrossian Paris. In 1999, while creating a café-boutique concept for the prestigious house in NYC, he baffled the culinary world with his unexpected dishes around a Caviar theme. He wowed American gourmets, and was featured in Food Arts magazine. News spread quickly of Conticini’s immense talents and within only 18 months he was awarded a Michelin star.

Today, in between being a TV star with appearances on the popular French equivalent of the Great British Bake-Off show – among others – he teaches the sensation of taste with ongoing workshops, and continues to revitalize the universe of scents, taste, textures, flavors, and presentation that generate that special Madeleine de Proust feeling of déjà-vous (or should I say déjà-goût?).

You would think with all of these credentials, chef Conticini would be distant. It couldn’t be more the opposite. For me it was memorable magic to chat with him informally; Conticini demonstrates a modest sincerity, and is willing to share his intrinsic form of expression through pastry.

Chef Conticini stresses that his take on the classic Christmas Yule log is simple – yet his three bûches have taken two-three months to prepare. It takes time to produce something so tecnicially complicated, he says, and that has to appear effortless, so as to remind us of the traditional French festive dessert from childhood but with that modern Conticini touch.

This is for pure vanilla fans looking for that creamy intensity, rolled to a black center of vanilla grains with touches of griotte cherry throughout. He suggests finely grating a touch of lime zest to finish off the dessert: the lime delicately magnifies the vanilla beautifully.

What’s Christmas without chocolate, they say? Classic chocolate and vanilla are worked into a symphony of textures and its warming sensations of silky dark chocolate are sumptuously progressive.

Following his signature Paris-Brest with an extra secret praline center, it’s no surprise that his famous praline continues to excite the senses here. On a base of salted crunchy praline and a light hazelnut sponge, the lemon is extremely delicate within a vanilla mousse with a round finishing sensation.

Following on the success of Conticini’s white chocolate collection, the new collection is presented in a magic box of golden secrets for the festive season, with 10 extra-fine mini tablets revolving uniquely around praline. The praline predominates the palate – whether it’s dark, milk or white chocolate – but the whisper of raspberry, fleur de sel, lemon or coconut make each nibble a special treat.

I particularly loved the milk chocolate and passion fruit, as Conticini leaves the fruit seeds in the chocolate, giving it that extra fine crunch. I don’t normally like seeds in pastry cream, but here it’s a surprise that works.

Having already published award-winning recipe books which are also a reference for professional chefs, Philippe Conticini’s latest, Souvenirs Gourmands, is now on the shelves and co-written by Pascale Frey.

I couldn’t resist snagging my own as an early Christmas present from hubby since it’s filled with delightful childhood gourmet memories of 50 French celebrities (Alain Ducasse, Guy Savoy, Christian Lacroix …) with their favorite souvenirs linked to their recipes that are all given the Conticini twist. I’m sure we could entice them to produce an English version, too.

As the first patisserie on the Rue du Bac, the Pâtisserie des Rêves has been such a go-to address that other prestigious pastry boutiques have followed suit to join in one of the most sweet gourmet streets in Paris. In June this year, Chef Conticini was chosen as Godfather of the first ever Bac Sucré event, to celebrate the talents of his artisan neighbors.

Also just in time for Christmas, are pink gift cards which will come in handy for pastry lovers (hint, hint, Antoine) – but this is my favorite lucky hit: the new buttery Fortune cookies with their subtle hint of coconut. It’s perhaps the French answer to pulling British Christmas crackers at the table. As I opened mine, the message read:

“Happiness is achievable to those who know how to taste”.

That simply sums up the essence of Chef Conticini’s sweet magic. 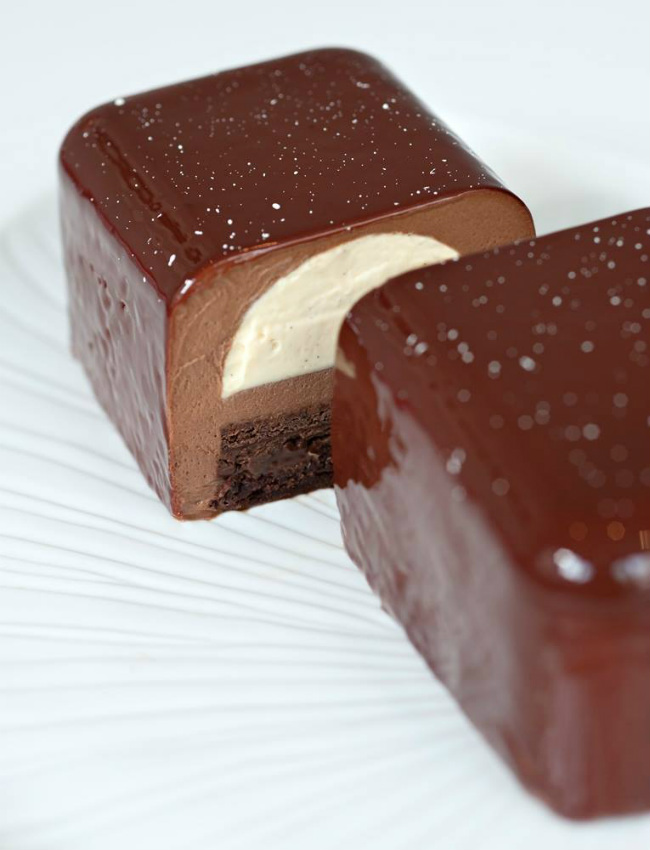