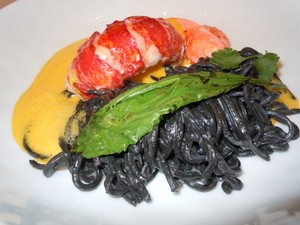 Since early this year The Triangle D’Or has a shiny new restaurant. The former Saveurs de Flora Mikula is a bright contemporary space: RDV at L’Instant d’Or.

The name’s a play on Triangle D’Or and, as you’d expect in the midst of retail therapy central, the tableware’s exquisite, super-shiny eating irons and sparkling glasses await.

Studio Mark Hertrich are responsible for the amazing transformations which took one year to complete. Three rooms have three different decors, depending on your mood. The theme’s set in the first salle with a magnificent chandelier created by artist, plasticien Géraud de Tarsiac. A white robot oversees the delicious proceedings; is that a look of amazement on his face?

But what about the food?

“I’m from Marseilles, so obviously I have a preference for fish and seafood”, admits Duca. So try Homard Bleu, Turbot Sauvage, Bar de Ligne but there’s also L’Agneau Fermier and Le Boeuf Wagyu, each dish has a “Duca” style. What do you expect with a name like that?

Kiriko Nakamura, chef patissière, conjugates her desserts into fruit headings: La Clémentine: La Poire: Les Fruits Exotiques and, of course La Chocolat, each is delicate as a spring day in the Japanese countryside.

Valéry Batacchi, Director du Salle advises wine by the glass from about 8€ : Saint Julien Le Petit Cailloux 2007 (55€) or the white Chardonnay, Pouilly Fuisée Vielles Vignes from V. Giradin 2008 (45€).  L’Instant D’Or is where you celebrate the arrival of the new Vuitton, Hermes, or even the BMW who’s shiny new showroom is next door. 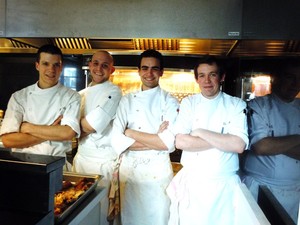 Which came first the chicken or the egg? Antoine Westerman’s Coq Rico tries to answer this question in depth at Coq Rico. If you’re faint hearted, taxi or Monmartrobus it up the hill, it’s steep, the climb will enhance your appetite make you feel you’ve earned your lunch/dinner and will tone your butt a treat darling.

Before you walk into Coq Rico, look behind you at Le Moulin de la Galette, the mill once supplied flour to the village, it was painted by Renoir, who lived round the corner when he couldn’t even afford to buy paint, let alone a meal, and Picasso, bien sur, and countless others. It’s now a resto (what else?) owned by Antoine Heerah who Pudlo calls “le petit Napoléon des hauts de Montmartre”.

Westermann has a belle histoire. He created Le Buerehiesel, Strasbourg. Snagged 3-Michelins and returned them when he handed over to his son Eric W, who now has one Michelin and is doing very nicely!

Meanwhile, Daddy Westermann’s tidying up sad old maisons in Paris, www.drouant.com www.monvieil-ami.com and, at the just launched Coq Rico, Montmartre, gives top credit to his suppliers all listed on the menu. If you love chicken, and who doesn’t you’ll adore Coq Rico, revised and corrected from bubba’s recipes. Frankly my dear I don’t care which came first, they’re both flying fantastic! Coq Rico’s not a rip off, like so many Montmartre canteens, quality price you’ll love it.

“And, because there would be no restaurants without clients there are 11 Fucking Dinners planned”, says creator of Omnivore Luc Dubanchet. 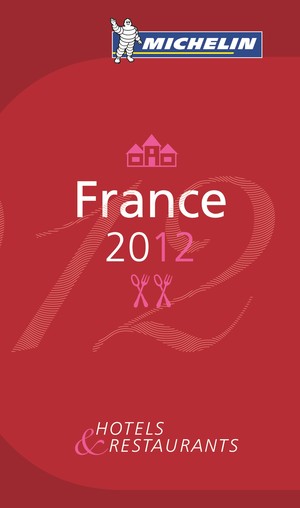 Two new two stars in France include two in Paris: Sur Mesure par Thierry Marx at The Mandarin Oriental and L’Abeille, at Le Shangri-La, chef Philippe Labbe. Both had two-stars in their former kitchens. Marx at Cordeillan-Bages, Labbé at Eze, on the riviera.

The Buzz in Paris: Rooftop Beehives, Honey and Urban Beekeeping