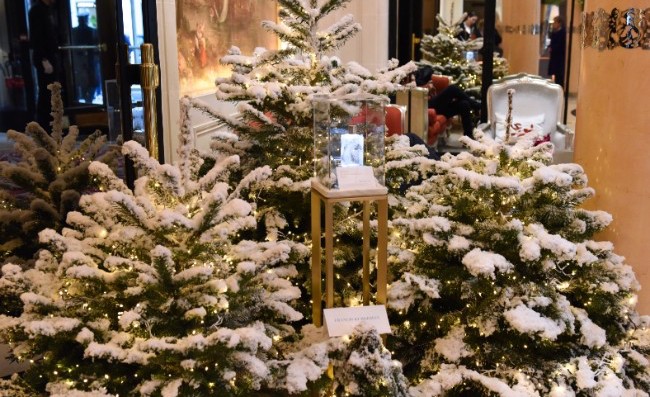 ‘Twas the month before Christmas, when all through the city
Store windows were dancing, night sparkles were pretty

Twinkling lights had been strung from the lampposts with care
In hopes that St. Nicholas soon would be there (well, in a month).

—With apologies to Clement Clarke Moore 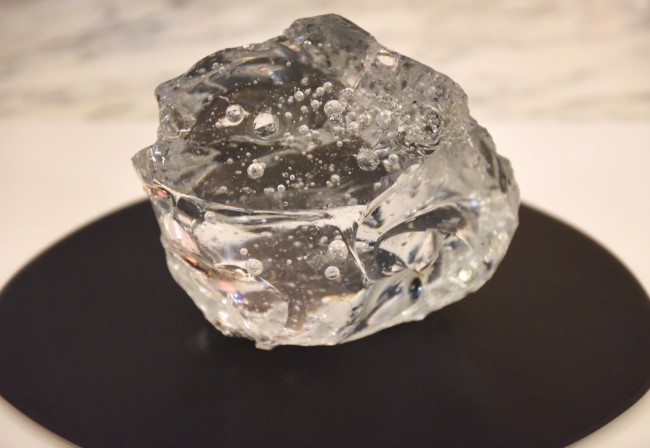 It’s official. The holiday season has arrived in Paris. The store windows are bursting with color and creative character, the streets are glittering, and the grand trees are in place in traditional settings such as the Galeries Lafayette. 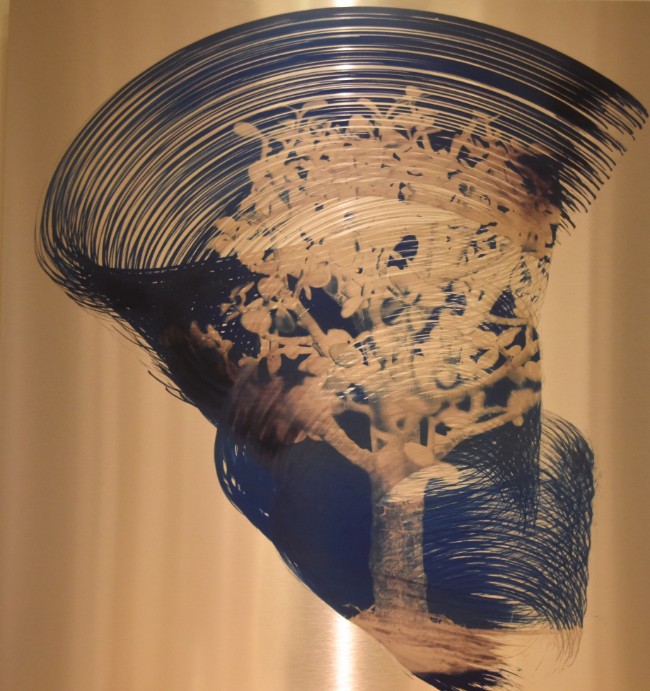 One of the key inaugural events that seems to fly by too quickly is the Sapins de Noël des Créateurs at the Hotel Plaza Athénée. Haute couture designers and artists, organized by Director Marie-Christiane Marek, offer their unique view of the holiday spirit in one-of-a-kind creations. 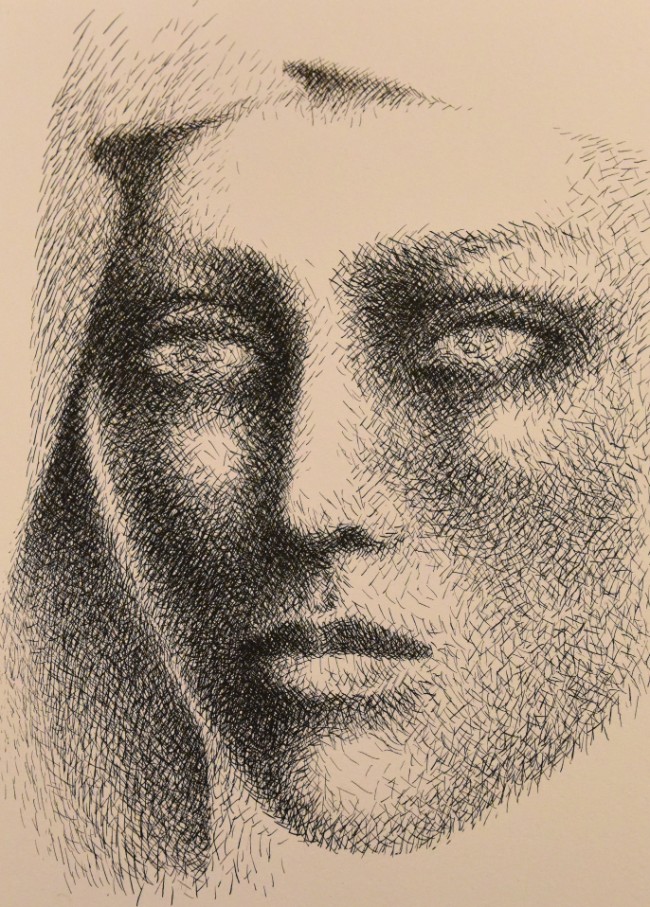 The pieces are on public display for three days and then are auctioned off at an invitational dinner event, with all proceeds going to cancer research, led by Professor David Khayat.

Although many of this year’s 27 pieces have a tree theme (or at least some vertical structural elements), some push the boundaries of the definition of “Sapin de Noël.” 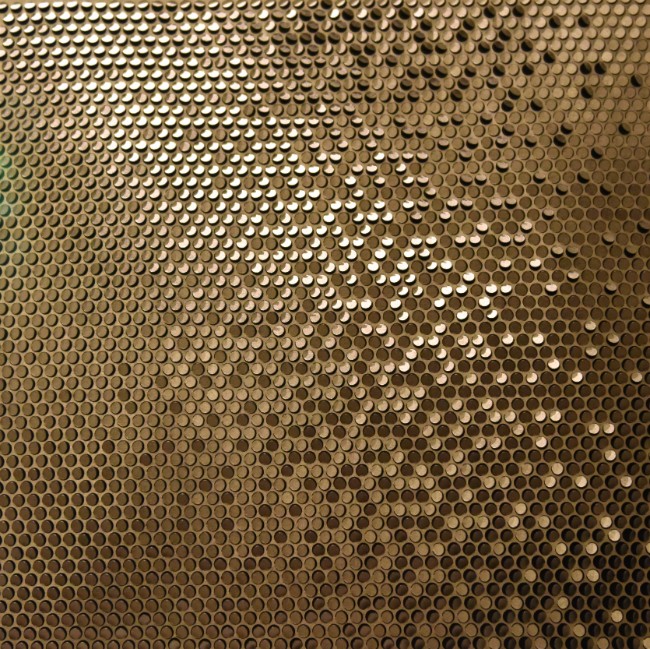 Magritte would surely say “Ceci n’est pas un sapin” when studying some of the work. And he would be right, rather than just existentially thoughtful.

Without question, though, all the pieces are artistic. Materials range from Swarovski crystals to blown glass to wood to metal to gold leaf to bronze to satin to plexiglass to velvet ribbons to neon to bamboo to pine cones to tulle to cyanotype on aluminum. 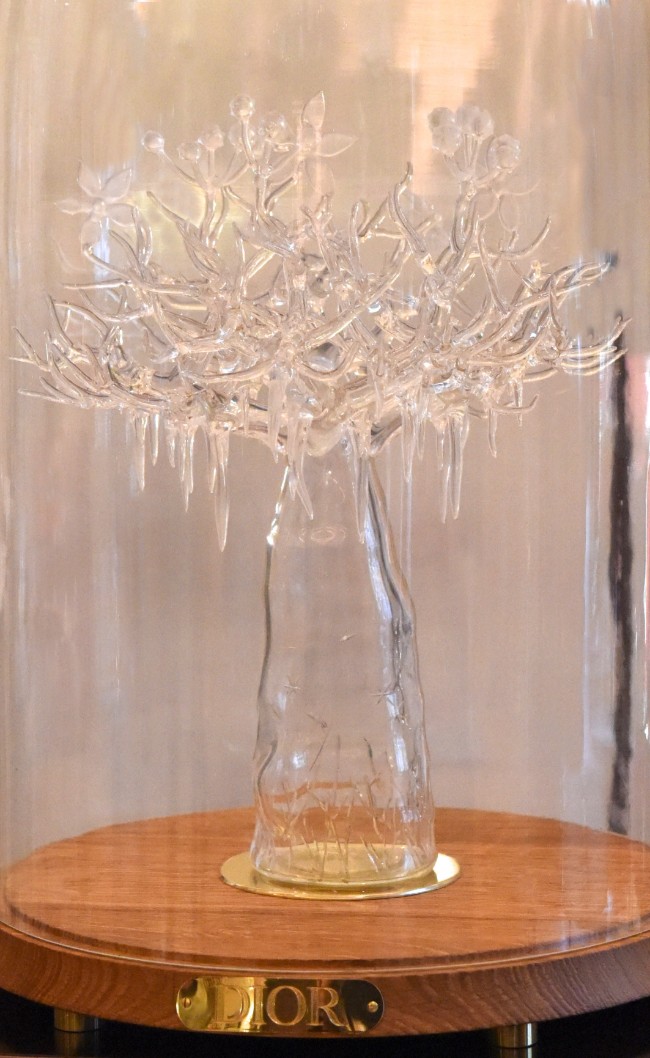 One of the most elegant pieces is the blown glass “L’Arbre de vie” by Dior (difficult to photograph because of its beautiful delicacy, but something you might clearly want to feature in your living room). 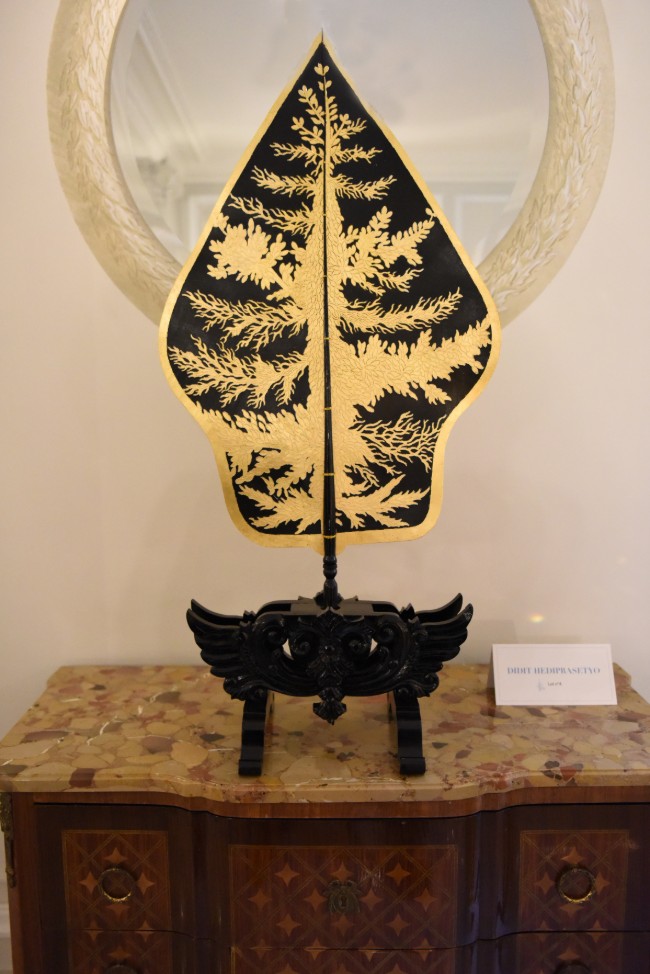 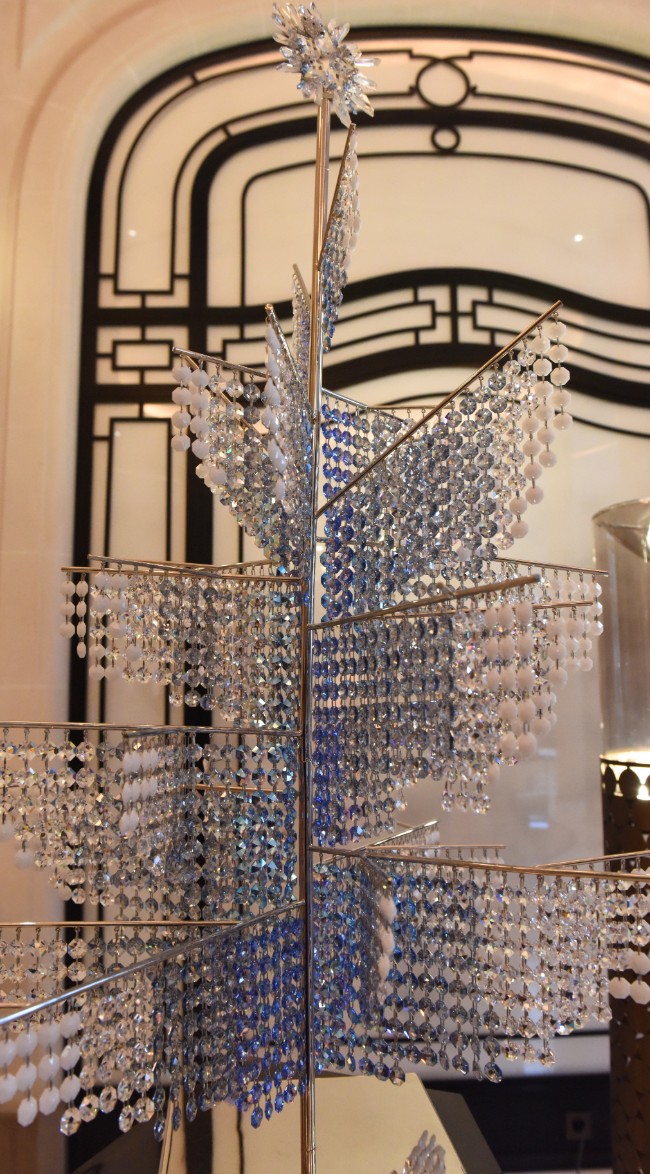 Three of my favorite works push the boundaries of “tree” in unique ways. Sylvain Le Guen’s “Plissé des glaces” is made of three folded cones of transparent acetate film that fit over each other like Russian dolls and offer an artistic rendition of the aurora borealis interspersed with sparkling diamonds. Christian Ghion’s “Christmas Trophy” is a streamlined sculpture of wood and metal, with gold leaf, that presents a bold “tree” essence. Philippe Ferrandis’ “Trésor de glace” is a tree-like sculpture of metal and crystal that functions also as a candelabra. Pourquoi pas?

This 24th edition of the Sapins de Noël des Créateurs offers its first submission of a working lamp, in the piece by Elie Saab called “Pilier de Lumière,” created in collaboration with architect Carlo Colombo. 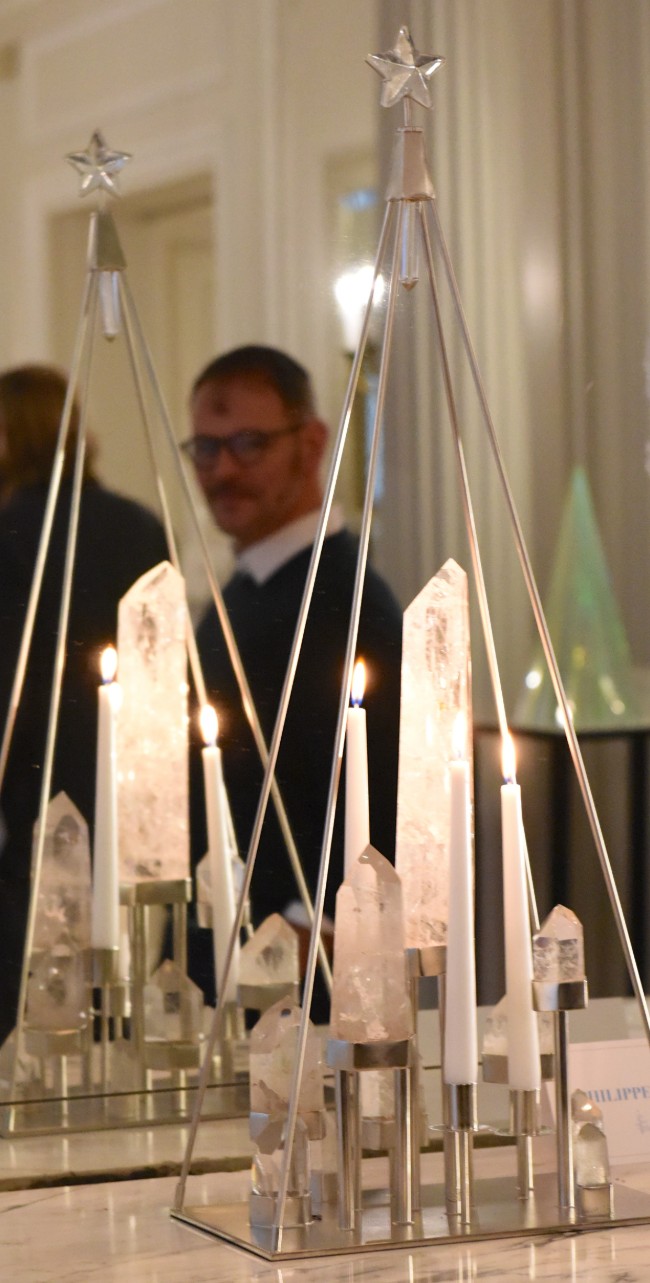 Other unique pieces include a “Fluffy Cruel Corset” by Eymeric François; a plexiglass, mirror, and neon work called “Coeur,” by Emmanuelle Rybojad that can be viewed in many ways because of its sense of infinity and multiple reflections; an ink drawing by Olivier Theyskens of a “Sainte Inconnue;” and a crystal sculpture by Patrick Hourcade called “The Last Iceberg” that should remind us all of our commitment to the planet.

What better way to welcome the spirit of the holidays than with the creative genius of artists, architects, and designers—and all for a good cause. 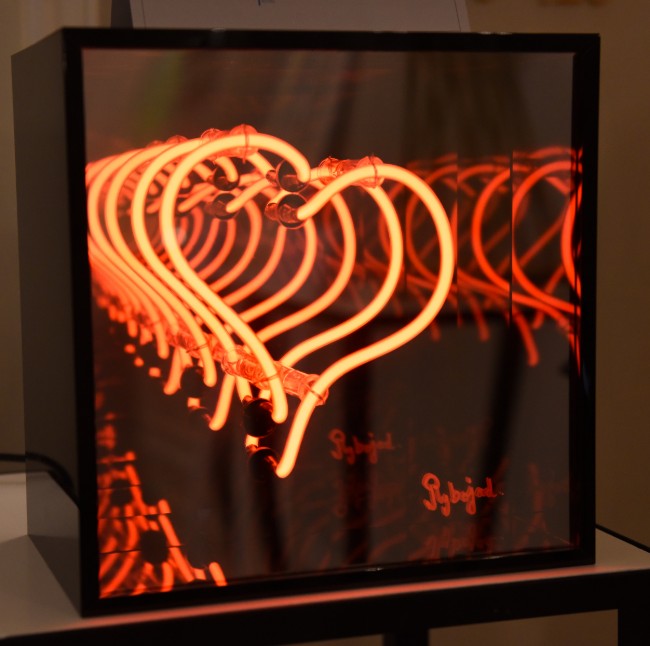 The exhibition is open and free to the public at the Hotel Plaza Athénée on Sunday and Monday (November 24 and 25) from 11 am to 6 pm. The auction dinner (by invitation) will be held Tuesday evening, November 26. For more information, visit Les Sapins de Noël des Créateurs.