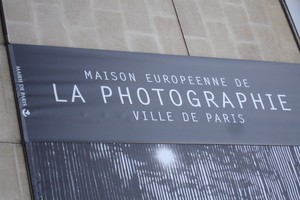 “The biggest cliché in photography is sunrise and sunset.” So opined Catherine Opie, Professor of Photography at the University of California at Los Angeles. You will see no such clichés in “Toute photographie fait énigme” (“Every photograph is an enigma”), which runs through January 25, 2015, at the Maison Européenne de la Photographie in the Paris 4th.

This exhibition explores the theme that photographs do not necessarily reflect reality, but, on the contrary, that they are “a source of ambiguity and often, perplexity.” Every photograph in this exhibition elaborates that theme. According to Michel Frizot, the photography historian who designed this large exhibition, all the photographs, most of which were taken between the 1860s and 1970s, were collected two or three decades ago at fairs, flea markets, and shops. Most are anonymous in that no one knows who took them. Almost all are black and white, and many are silver prints, but there are also what look like Polaroids, and many photographs that were also postcards, as once was the fashion.

The exhibition is divided into eleven themes, such as “The enigma of context,” “The enigma of the relationship,” “The spirit of the place,” and “The space of the gaze.” And it is a curious and enigmatic collection, indeed. The photos are dark and shadowy, mysterious and grotesque. Some are just plain weird – not Diane Arbus weird, but weird in their juxtaposition of the imagination and reality. For example, there is a very dark photo juxtaposing people in Ku-Klux-Klan-type pointed hats with what looks like a balloon on a string hovering nearby. There is an arm – actually a fragment of a statue – but so real it looks like a cadaver’s arm, broken off above the elbow and mounted on a pedestal for the viewer’s delectation – or not. And then there is the silver print taken by a photographer of the Agence Schostol, one of the best-known photography agencies of the interwar period, titled “Les premiers nés de l’année 1939” (“The first born of the year 1939”), which shows sixteen newborns laid on the floor in the shape of a Nazi swastika.

Another weird photo is “Photographie transcendetale avec visages d’ectoplasms” (“Transcendental photography with faces of ectoplasm), taken in 1939. The word “ectoplasm” should give you just a hint of this photograph’s weirdness. But then, there is “Un bouquet de roc et de boue” (“A bouquet of rock and mud”), which shows rock at the moment of explosion blossoming into a bouquet that could just as easily have passed for a billowing aquatic plant.

This exhibition takes time to take in, because you need to look closely at each image. But it is time well spent. And for those who want more insight into the photographs and the exhibition, there is a catalogue in French and English available in the bookstore for 39 euros.

For photographs that present a much clearer view of the world, the Galerie du Crédit Municipal de Paris, at 55, rue des Francs Bourgeois, also in the Paris 4th, is hosting an exhibition of the work of Jean-Philippe Charbonnier entitled “L’Oeil de Paris” (“The Eye of Paris”). Held in conjunction with the Musée d’art modern, and scheduled to run through February 14, 2015, the black and white photos, all produced using the gelatin silver process, are culled from the collection of personal photographs that Charbonnier, a little-know but important photographer of Paris life, gave to the museum in 1983, the year of his first major retrospective at the museum. Charbonnier also wrote the captions to each photo. 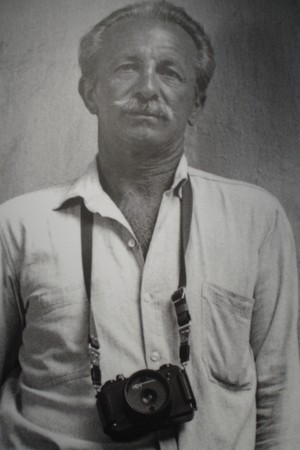 Jean-Philippe Charbonnier was born in 1921 and started taking photographs in 1939. During World War II he worked in photo labs and shops, until he finally started freelancing in 1949, when he went to work for the French magazine, Point de Vue – Image du monde, where his first photos were published. He found a more permanent perch in 1950, when he started working for the French magazine Réalités, where he worked until 1974 and during which he became a globe-trotting photographer, shooting in such diverse places as Brazil, the Canary Islands, Haiti, and India. He used two cameras, one to shoot in color and one to shoot in black and white.

Unlike the photos at the Maison Européenne de la Photographie, Charbonnier was interested in neither enigma nor illusion. Rather, he wanted his photographs to present the reality of life in Paris, “with its truth neither softened nor its defects erased.” Thus, there are photos of Paris streets, some with an empty and lonely feel. Others show people both famous and not – members of the military, children on the street, Christian Dior, and Miles Davis. 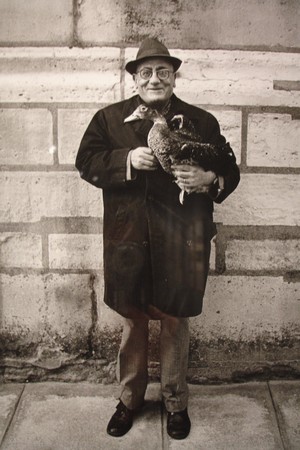 There are also several photos that show Charbonnier’s expressed love of the absurd and what he called the improbably amusing. For example, there is a photo, taken in 1976, titled “Monsieur Canard et son canard, Paris,” which shows a man, named Monsieur Canard, with his canard – his duck; and another photo, taken in 1981 in Rungis, the location of the large wholesale food market in the southern suburb of Paris, which shows a butcher flanked by an animal carcass splayed like butterfly wings behind his shoulders. The title: “Le boucher – papillon, Rungis, 1981” – that is, “The butcher – butterfly, Rungis, 1981.” And there is the photograph used on the exhibition’s publicity poster, entitled “Le derrière de Notre Dame,” taken in 1981, which shows the curvy derrière of a woman lying on her side on the retaining wall of the Seine, across the river from the back of Notre Dame, while Charbonnier photographs her and her male companion, who is also photographing the derrière of Notre Dame. Very playful, and totally in keeping with his reported view of the world.

Christmas in Paris 2017: A Photo Tour of the City’s Magnificent...