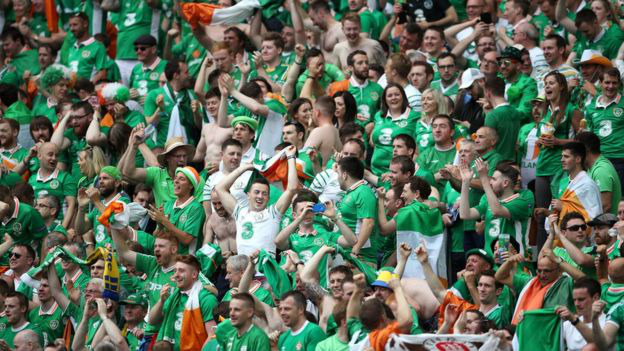 From serenading the French police, to soothing a sleepy child with sweet lullabies and helping an elderly couple to change a flat tyre – it has to be said that Irish footie fans have demonstrated exemplary sportsmanship at this year’s UEFA European Championship. In recognition of this, the Paris Mayor Anne Hidalgo awarded Irish football fans with one of France’s highest civilian honors – the Grand Vermeil medal.

At a ceremony in the Paris Fanzone, Mayor Hidalgo presented the award for the Republic of Ireland to Jamie Monaghan, who attended all four Republic of Ireland games at the tournament despite suffering from a condition which has rendered him unable to walk or talk. Accepting the Medal on behalf of all the Northern Irish fans was Jim Spratt from Belfast, who spoke about the fans’ unwavering support: “I think what has captured it most is we would stay in the stadium half an hour after our team has been beaten and still be singing.”

Mayor Hidalgo praised the Irish fans for the “good atmosphere they generated” and for the “extraordinary things” the French people had seen since the beginning of the Euro competition. “We’ve seen love songs in the streets, we’ve seen baby songs in the Metro, we’ve seen policemen singing with the Green Army,” she said, “and we are excited this year to award the Irish fans.”

Created in 1911, the Medal of the City of Paris is a symbol of appreciation that recognises individuals or groups who have made a “remarkable act on the capital.” The medal is engraved with the city’s motto “fluctuat nec mergitur” (“il est battu par les flots, mais ne sombre pas,” in French) meaning “she is tossed by the waves but does not sink.” Irish football fans join previous honorees including Spanish tennis champion Rafael Nadal, American dancer and jazz singer Josephine Baker, and French fashion designer Sonia Rykiel.

It seems that the Irish fans have won the hearts of the French – a very proud moment indeed for the Green Army.