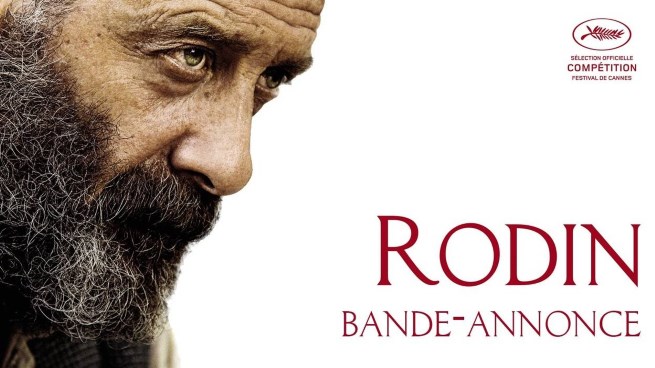 When we first meet Rodin, he is in his studio.

There, the celebrated 19th century Parisian sculptor stands before his mid-progress “Gates of Hell.” As many know, it became (arguably) his most famous, celebrated work. (The sculpture is viewable for viewing at the Rodin Museum in Paris: 79 Rue de Varenne, 75007).

Rodin, from director Jacques Doillon, opened to great fanfare this week at the 70th Cannes Film Festival. The film’s cast and director took to the red carpet on Wednesday, signing autographs, taking selfies with everyone from grandmas to police officers, and posing for the photographers.

As the lights dimmed in the Grand Théâtre Lumière, that image of Rodin in his studio filled the screen, as the story of his life unfolded.

In the studio, Rodin (Vincent Lindon) shows Camille Claudel (Izïa Higelin) his etching of another famous work, “The Kiss.” He later says to her of “Gates of Hell” : “I spent a year drawing them” [editor’s note: the 180 sculptures depicted therein].

“For me, clay comes first.” He shapes a clay model, with a live model in front of him, before making it into stone, like the stony, blank face of the model on the table. Later, Rodin molds the nose (in clay) on his bust of Victor Hugo, just so. “There’s something of a tiger in him. Or a lion,” says an onlooker.

“Hugo is animalistic,” says Rodin. The Les Misérables and Hunchback of Notre-Dame author had refused to pose for any sittings for the artist.

Doillon’s film takes viewers on a journey with Rodin in the second stage of his life. At this time, he is a successful, celebrated artist. Unlike certain other French persons in the arts – Max Jacob, Alfred Jarry, Henri Rousseau – Rodin achieved fame and great successes in his lifetime.

But, success has gone to his head a bit. He indulges, particularly romantically. The object of his true “furious love…mad love…” romantic adoration is not his wife, Rose Beure. It is Camille, a fellow sculptor and model for Rodin.

Their relationship is a stormy one, in the way that passionate, Romeo-I-must-have-you-or-I-will-surely-die relationships tend to be. He loves her, most ardently. Asking her who her favorite artist is, he feeds the word to her, whispering: “Rodin.” Camille smiles cheekily and says: “No.”

The two lovers walk in the woods, stopping to kiss up against tree trunks, which look very uncomfortable and bug-laden. Rodin rows her along the pond in a boat, telling Camille she is beautiful. If the acting chops of Lindon and Higelin weren’t as good as they are, those scenes would feel a bit gag-worthy and saccharine. But the actors’ artistic deft prevents that from happening.

In the woods, Rodin pauses to admire a worm in the middle of the road. As an artist, his keen eye is attuned to life’s daily throwaway moments, those which others might miss.

Camille flees for England, after having had enough of Rodin’s shenanigans. There, she teaches sculpture, a friend tells Rodin. He is heartbroken that she has fled. “I am weeping,” he says of her departure.

When Camille returns, Rodin insists he wants to marry her. She proposes a contract to him, which she dictates as he writes. It includes items like: Take me to Italy, make a sculpture of me, marry me, be faithful to me, and more. As she examines what he’s written, she notes he has misspelled the word “faithful.”

There is a mid-film scene where Rodin meets with his contemporary, the famous Claude Monet. Also present is painter Paul Cézanne, who tells Rodin he’s frustrated by all the rejection he’s getting.

Rodin pauses, and says to Cézanne: “Don’t listen to anyone. Get back to work. There’s beauty in the work.”

The film opens June 8, 2017. This year marks the centenary of Rodin’s death, and there is an impressive exhibition at the Grand Palais in Paris.

Previous Article Pierre-Joseph Redouté: The Raphael of Botanica
Next Article Lindsey Tramuta: An Interview with the Author of ‘The New Paris’