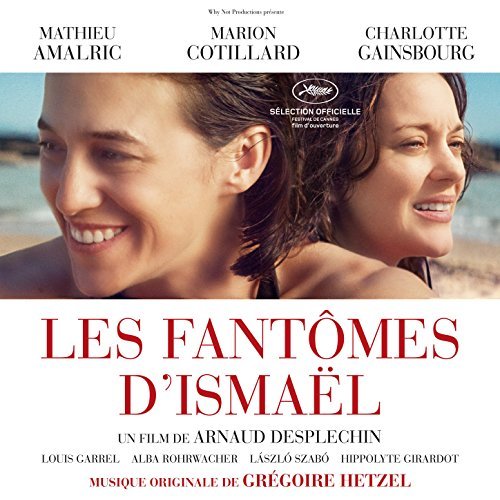 Arnaud Desplechin is widely considered France’s greatest director. But the auteur of such masterworks as Le Sentinel, Esther Kahn, Rois et Reines is more a filmmaker’s filmmaker than public fave. Pascale Ferran, a brilliant director in her own right, has spoken of his influence over a generation of film artists. While Les Fantômes d’Ismaël (Ismael’s Ghosts) opened the Cannes film festival, befuddled Americans commented that it was “uh … very French”. (To be fair, many French people will call it “eugh … très Parisien”).

The protagonist (dazzlingly played by Mathieu Amalric) is a director himself. He may be schizophrenic, as well. The film is certainly schizoid. The first part is an extraordinary tale of depth and power, three great actors (Amalric, Charlotte Gainsbourg, and Marion Cotillard) playing out a psychodrama in which sexual triangle melds into spiritual ménage à trois. (Guardians of the Galaxy this is not). The second part goes completely awry.

As the film starts, Ismaël is middle-aged and grizzled. He looks shell-shocked, for good cause. Some time previous, his wife Carlotta walked out of his life, maybe out of life period. Years after her disappearance, he’d signed a document ruling her “absent”, presumably dead. He’s haunted by her, and has terrible nightmares. Carlotta was the daughter of another director, Bloom, who may have been Ismaël’s mentor (he has nightmares, too).

There’s a provisional respite when Ismaël meets a lonely astrophysicist named Sylvia (Gainsbourg). He sees in her a kindred spirit, holding back something (she admits to a penchant for dead-end affairs with married men). She detects something behind his mask that she wants to penetrate, as she does with faraway galaxies. In scenes the director shows out of strict chronological order, we see the relationship unfold, the characters come out of their shells, the forming of an idyllic life.

Unfortunately for them, Desplechin will have none of that. If the current nostalgic fashion is for Jane Austen, Desplechin the contrarian opts for the Bronte sisters. A ramshackle house on a windswept coast is the perfect setting for what follows.

One day, the ghost returns, or rather Carlotta turns out to be alive. Like a horrorshow zombie, vampire, or maybe (given her Jewish background) a dybbuk—she pursues Ismaël. (Oddly, she doesn’t want to see her father.) After inflicting torment on Willem Dafoe in Antichrist, it’s Gainsbourg’s turn for the harrowing of an emotional hell. Desplechin films this in direct Cassavetes-like fashion, but we’re light-years from a naturalistic domestic scene.

Ismaël is tempted by his wife (still legally dead), struggles to hold onto to his relationship, and feels guilty for keeping Carlotta’s reappearance from her father. He also tries to discover why Carlotta left in the first place, what she did all those years. We get answers to some mysteries, others lay strewn about the filmscape. Ismaël becomes so overwrought he goes AWOL from his latest production.

This is all very engrossing—we’re immersed in a weird place, and it’s not just virtual reality. Even more fascinating is the relationship between Carlotta and Sylvia. Carlotta is an overpowering, female Heathcliff out to reclaim her life. She may be toying with Sylvia, like a cat with its prey. But she’s also entranced by the woman who seems so different, yet similar, to her. Ms. Cotillard sometimes belts out roles the way Edith Piaf (whom she played in Le Môme) belted out songs. Here the slyness and rawness of her characterization feels authentic, and is utterly riveting.

Just as riveting is Charlotte Gainsbourg. She’s the Jane Eyre of Desplechin’s Bronte sisters mash-up: Strong-willed, decent, loving, vulnerable, intelligent, with a host of other qualities that are sorely tested. Sylvia never stops giving the sense of an inner core withheld. While not as extraverted as Carlotta, we feel Sylvia on our nerve-endings. Unlike the kittenish eroticism of her mother Jane Birkin, or the relaxed loucheness of her father Serge Gainsbourg, Ms. Gainsbourg’s quietly fierce features give the impression that a “ghost of electricity howls through the bones of her face.” (Thanks Bob!)

It’s too bad we don’t get a concrete sense of Sylvia’s vocation and what it means to her. We also don’t feel the reality or meaning of Ismaël’s life as a filmmaker. As for Carlotta, she’s supposed to be a Jew, but aside from being a wanderer named Bloom, Ms. Cotillard never really evokes her Jewishness.

Midway through Ismaël’s Ghosts the director takes it off the rails. It’s not clear why. A lack of inspiration, or nerve? When Desplechin’s film derails it’s like the Highball Express barreling down an embankment. We get a film-within-a-film, madcap comedy when a production person shanghais Ismaël back to the shoot, over-the-top sick-bed reunion of Carlotta and Bloom. I may be missing one or two things I was too dazed to register. At his best, Amalric has a Hamlet-like antic quality—his glittery eyes and jittery voice give off emotion like a sparkler. But in this last section he’s frazzled and opaque. Then he reminds us of Dwight Frye’s nutty Renfield in Dracula.

It’s possible this is a profound descent into a Joycean underworld (not only are Carlotta and her father named Bloom, the film-within-a-film’s hero is named Dedalus—get it?). Ismaël’s Ghosts may require more than one viewing to get it. A friend once said of a dense piece of writing, “Impressive, but you have to read it five times to understand it. Who the hell wants to read something five times?” Who’s going to make the effort with Ismaël’s Ghosts? Not many in Hollywood—Orson Welles’ movie about a director at the end of his rope is still being completed decades after his death. Hopefully, adventurous movie-lovers will check out this film for its spiky originality. But for many, once will be enough.

Previous Article A Chat with Author Cara Black about Her New Book, Murder in Saint Germain
Next Article Australian and Parisian Style Comparison