Home Cinema Chercher Hortense (Looking for Hortense) : A Parisian Bobo at the End... 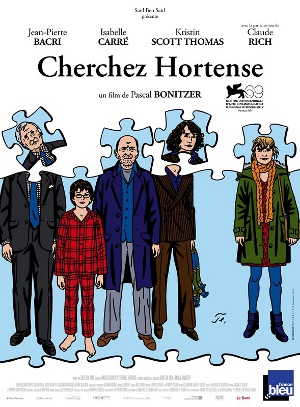 Who is Hortense? He (Hortense is actually a surname) only becomes important towards the end of the movie, and proves anticlimactic. The real object of desire in Looking for Hortense is a woman named Aurore (which means, appropriately, dawn), who is not the Frenchwoman she appears to be but a Serbian-Montenegran with paper problems. Damien has been asked to help with her problems and moves, in fits and starts, to becoming more passionate about her case and then smitten. Yet Looking for Hortense is not at all a drama about undocumented migrants. It can only be described as an entropic comedy about bobos (bourgeois-bohemians) in Paris, in particular about one intellectual bobo at the end of his tether.

The noted actor-screenwriter Jean-Pierre Bacri (Le Goût des Autres, directed by his wife and writing partner Agnes Jaoui) plays Damien, a middle-aged, somewhat scruffy Asian studies professor who teaches a seminar on Chinese culture to businessmen doing business with China. He’s partnered with Iva (Kristin Scott Thomas), a theatre director and chain-smoker.  They live in the archetypal cluttered but stylish Parisian apartment with a young son who’s a smart-alecky version of Harry Potter (Marin Orcan Tourres). When Damien is asked by Iva’s sister and brother-in-law to help Aurore, he finds his bobo paradise turned upside down.  Part of that may be coincidental: this lifestyle can be more unsettled than regular middle-class existence, and so the discontents that come with time are inevitably more dramatic: Ivo slides into an affair with the leading man of her latest play. Damien’s widower friend Lobatch (Jackie Berroyer) contemplates suicide. Damien himself doesn’t seem too motivated teaching executives the Tao of Chinese Trade. 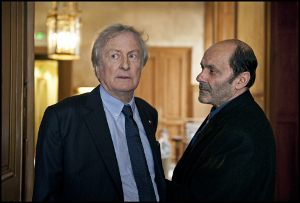 But there’s more to it than that. To help Aurore, Damien is supposed to go to his father, the elderly president of the French Conseil d’Etat (there is no mandatory retirement age for the conseillers). Damien’s relationship with his high-powered father has always been fraught.  Sebastian has neglected his son emotionally, and isn’t forthcoming now. It doesn’t help matters when Sebastian reveals that he’s bisexual. Claude Rich, a French acting institution (Le Souper), gives a sterling performance as one of France’s elite mandarins, and while always courtly, his smiling complacency is chilling. Damien comes to recognize that his world, defined by the father-son relationship, is even more illusory than he’d thought.

All the actors give fine performances. Bacri is brilliant and moving as a man who keeps plugging away and stays decent even as he undergoes a slow-motion meltdown. His smile (as Aurore says at one point) has numerous registers, and his every nervous fidget and twitch is expressive. Isabelle Carré is affecting (and seems much younger than her years) as the ever-hopeful and idealistic refugee Aurore. Kristin Scott Thomas is also effective as a very different sort of woman—a jaded, unhappy Parisienne who mixes vulnerability and selfishness. 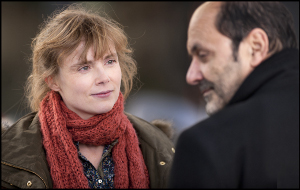 In keeping with the entropic theme, director Pascal Bonitzer (who also directed Rien Sur Robert with Fabrice Luchini) avoids a head-on approach. He flits from one set of characters, one problem to another. Damien bounces around like the feckless eight-ball that he is. It’s a curious narrative strategy that should be annoying and/or boring, but isn’t. We recognize the rhythm as the rhythm of life, or one kind of life. Bonitzer does a good job throughout keeping an elegant balance between ironic comedy and sour realism. The director is also excellent at showing us various facets of Paris, from funky bobo neighborhoods to the halls of academe and the haute administration.

In addition, the film uses Damien’s background in Chinese studies as an interesting motif.  Other characters also have an interest in Asian culture, there are several scenes in Japanese restaurants, and a young gay Chinese waiter figures in the action. This smacks of the old French bourgeois tradition of chinoiserie and japonisme (similar to what Anglo-Saxons call Orientalism). Asian culture is treated as an exquisite, Zen-like contrast to messy Western ways. The director does this in a half-serious, half-comic way, as a fascinating sort of counterpoint.

Looking for Hortense ends in a sentimental and pat way, with all the gentrified angst resolved in a May-December (or to be more precise, September-December) romance, as Damien finally gets the girl. This makes the audience feel good coming out of the theatre. But it’s a bit too easy for what’s been a tough-minded movie of sentiment, not sentimentality.