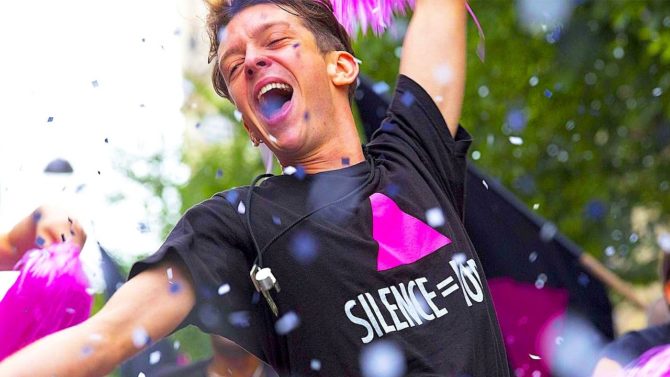 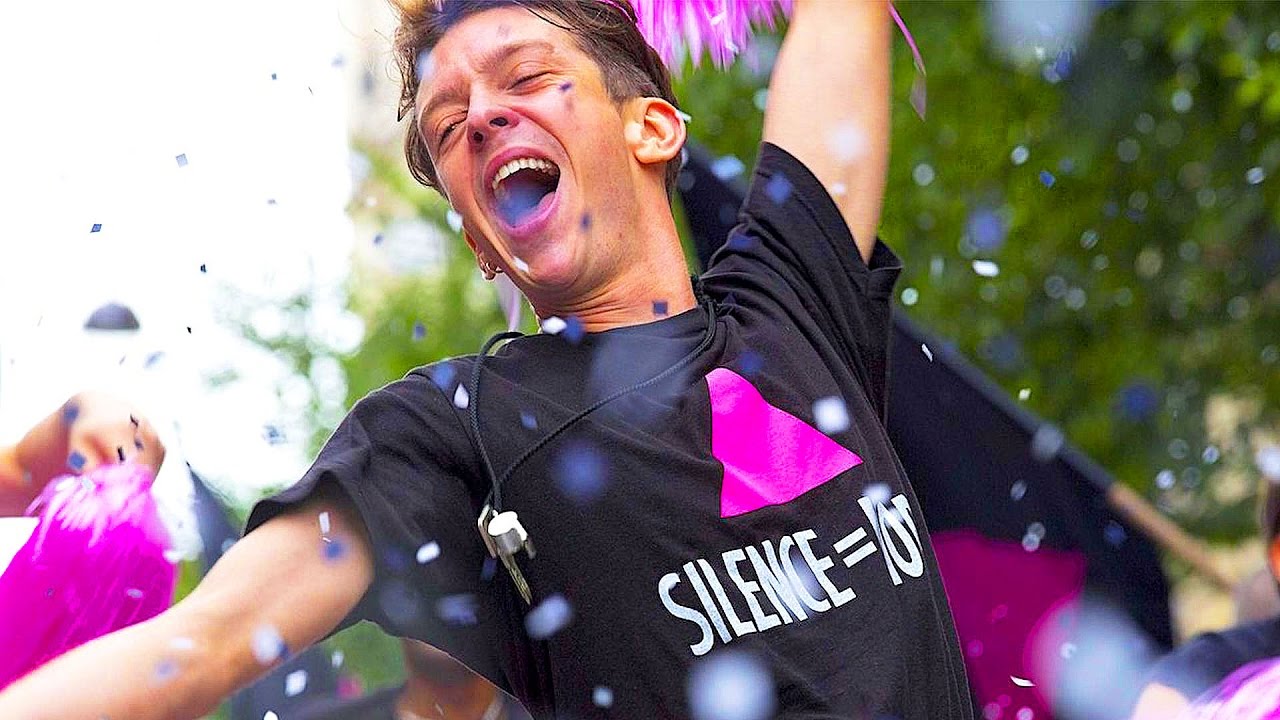 Robin Campillo’s 120 Battements Par Minute plunges us into the combat waged by Act Up Paris back in the early 90s, when progress was being made to understand and treat AIDS, but treatment was still limited to debilitating med cocktails. AIDS was still a mortal epidemic, and since France was one of the hardest hit countries, it was only natural that the gay community would create a movement patterned after the American Act Up organization.

The movie starts in media res, in the middle of things, with no setting up or contextualizing. This is exciting filmmaking, especially as the opening scene is of a group of activists invading a staid AIDS lecture, taking over the podium to deliver an impassioned speech, and manhandling the speaker—splattering him with fake blood and handcuffing him. This results in both a coup de theatre but also intense self-analysis by the group (did we go too far? were we counter-productive?).

Most of the movie consists of interactions among a small group of activists: Sean (Nahuel Pérez Biscayart), Nathan (Arnaud Valois), Sophie (Adèle Haenel), Thibaut (Antoine Reinartz). We feel that we know them in a startlingly short amount of time (though I had a hard time at first telling Nathan and Thibaut apart). We see them at Act Up meetings, fraught encounters with the pharmaceutical establishment, private conversations (also a few graphic sex scenes). The characters are affecting, and the live-wire dramatization of history is riveting. It has the makings of a great film, but though 120 Battements is certainly good (it won several awards at Cannes), and hopes have been raised for a Best Foreign Picture Oscar, it’s not all that good in the end.

The odd thing about 120 Battements is that all the activists seem very young, barely out of their teens. The only older character is the mother of an adolescent haemophiliac made ill by contaminated blood. Many Act Up Paris activists were in fact young, but others were older, (not to speak of AIDS victims in general). A good number of the Act Up founders were 30-something, rather than student age (the film’s director, also involved with the group, was born in 1962). The result of this skewed perspective is that the film has a children’s crusade quality, which may be the filmmaker’s intention.


Youthful revolt is a favorite trope in French culture, a reason the French keep returning to May ’68 as a defining moment. The film on this level is similar to agit-prop movies made about young radicals in the ‘60s and ‘70s. Getting Straight, R.P.M. and The Strawberry Statement were flossy Hollywood versions, while Jean-Luc Godard’s Les Chinoises used the archetype to make a brilliant film. 120 Battements feels less like an epic of recent history than a sentimental paean to idealistic youth, closer to Hollywood than Godard.

The age factor isn’t the only issue. The activists decry how the authorities neglect AIDS among minorities, drug addicts, and prisoners. But the film itself hardly presents any of these (except for one token black who is socially and culturally undistinguishable from the others). We also don’t get a sense of the sheer numbers of AIDS victims who’d died, or the horribleness of those deaths (except through a news photograph—of an American victim). This isn’t just a matter of authenticity or atmosphere—without context, those who didn’t live through the period won’t understand the outrage and desperation of the afflicted, why they went to war against Big Pharma and the government. (French audiences today may be perplexed that the sanctified François Mitterrand is portrayed as a villain.)

Sean emerges as the lead character. Nahuel Pérez Biscayart has the soulful good looks of a young Robert Downey Jr., and also has some of Downey’s charisma. At the beginning of the film he’s a disruptive rabble-rouser at meetings, as the group embraces its strategy of confronting researchers and health officials. He gets involved with Nathan, but Sean’s condition eventually worsens, and the film turns into a version of Philadelphia, with Biscayart in the Tom Hanks role.

Sean and Nathan exchange origin stories of how they discovered their sexuality, also how they were contaminated with HIV. They make torrid but tortured love, a kind of Kleenex-aided catharsis. It may be a cruel thing to say, but while there’s freshness in the movie’s agit-prop sequences, the human drama scenes feel stale, despite the fact that the actors give their all to their roles.

The other cast members also do their best (although the most talented, Adèle Haenel, spends much of the film with a stricken look on her face), and create vivid and sympathetic characters, though we never learn much about them. When Nathan asks Sean what he does for a living the other snickers, and with an amused tone they survey the occupations of their fellow activists. It’s as if in the face of imminent death, the employment subject seems trivial. And so it does, except that one of the striking things about the AIDS epidemic was how so many of the victims were vital members of their communities, a reason why the millions outed by the disease became a posthumous vanguard of the sexual revolutions that followed.

Most of the dramatic action is based on our idealistic (young) activists doing battle against the evil (old) pharma officials. We never learn precisely why the officials’ actions were so bad. Because they didn’t release data to lay persons—who would have done precisely what with the information? The film isn’t entirely to blame. I lived through the period, and though sympathetic to the activist cause, having known persons who’d died of AIDS, I felt then that the activists weren’t clear. They attacked the lack of transparency, but were themselves un-transparent with the general public. 120 Battements winds up on a mercy-killing note at odds with the rage to live it had trumpeted previously, with the ashes of the victim deployed in a sanctimonious protest against the establishment’s perfidy. And yet, it was researchers, pharma companies and governments that finally developed the treatments which turned AIDS into a manageable chronic illness.