What originally brought you to Paris?

I came to Paris to study abroad and fell in love with it; I came back a few years later as a research assistant, then returned a few years after that to do a masters in French literature at the Sorbonne, and that time I ended up staying.

Can you discuss your writing career and background a bit?

My background is in scholarly research, but when I was in graduate school I started writing book reviews and fiction, and writing in my journal all the time, and keeping a blog about daily life in Paris. Those last two forms of writing were very important ways of learning to write – I didn’t study creative writing in college or do an MFA. The journal forced me to write and made me get so much better at it, but I knew I was writing stuff that no one would ever read. It was very different writing for the blog, which was especially good training for writing things about myself that other people would read.

I think my age group (born in the late 70s) was lucky in a lot of ways – blogs didn’t exist until we were old enough not to embarrass ourselves too badly by keeping them, and they enabled us – or me in any case – to make contact with a lot of like-minded people, and to figure out how, exactly, to tell a story, to move from the actual event to the account of it on the page. I developed a sense for what about a story made it interesting, how to strip out the filler and get a sense for what was really happening in the exchange – socially, culturally, personally.

This is less a question of shaping a piece of writing to please an audience, and more a question of its audience shaping the cast of it, somehow.

Why do you think so many writers come to Paris?

I think to some extent it’s a question of legacy – writers and artists flocked to Paris in the early and mid-twentieth century* – and partly a question of how livable a city Paris can be. It offers a really wonderful quality of life and isn’t that expensive if you know how to do it – which markets to shop in, what kind of coffee to get, what kind of restaurants to go to. There’s a learning curve for sure but once you crack it (the internet is a big help here) it lends itself very well to the writerly lifestyle, where the work happens while you sit in a café for hours over one tiny cup of coffee.** There are also beautiful libraries that are free to use.

*It’s worth noting that American writers and artists came to Paris in the 20s because of the favorable exchange rate, and throughout the century because it offered certain freedoms that they couldn’t find at home – I’m thinking particularly of black and/or gay writers like Richard Wright, James Baldwin, Gertrude Stein, or Djuna Barnes.

**I wouldn’t recommend sitting in the cafe from morning til the end of the day – they will probably want to do a lunch service and they’ll make you feel pretty uncomfortable if you’re squatting without eating.

What current project(s) are you working on?

I’ve been writing my second novel for longer than I’d like to admit, but which I kept putting aside for academic projects, or Flâneuse, mainly for financial reasons. So I’m trying to get back to that. I’m in the end-stages of revising a flâneuse-y book about a year of riding the bus in Paris. And I’m working on a few essays – some academic (one on Virginia Woolf and Chris Kraus!), some not.

What is your favorite thing(s) to do in Paris on a lazy Saturday?

I love the brocantes and the flea markets so much. I’ll stroll through a brocante if there’s one near where I live, in Belleville, but a real luxury is to take the afternoon and go up to the Puces de Clignancourt or down to the Porte de Vanves. I just bought a flat and am slowly tracking down the various bits and pieces of things I want to decorate it – at the moment I’m in the market for a massive gilded mirror and a set of old steamer trunks. I’m always looking for vintage cocktail glasses, and I have this dream of replacing or at least supplementing my Ikea and Habitat silverware with a set of really beautiful silver cutlery. I also love these little Schweppes dishes that I use for everything from putting out snacks at an apéro to feeding the dog, and I always keep an eye out for enamel jugs and Iittala Kastehelmi goblets. Oh god I sound so bougie. But this is what I like to do on the weekend. In my defense, my grandmother was an interior decorator…

Do you think you’ll ever move back to the U.S.?

I’d happily go back for a little while for a residency or to teach, but Paris is my home.

Who are some of your favorite writers and why?

I have loved Jeanette Winterson since I read The Passion in my sophomore year at Barnard. Her prose is so lush and lyrical but her outlook is so wise and wise-cracking that it doesn’t get too ponderous, or only very rarely. I always feel so inspired after reading her or seeing an event with her. I’ve recently fallen for Ali Smith – Artful is the most heart-enlarging book I’ve read in so long and I really admire the way she moved between fiction and essay-writing, and How to Be Both is incredibly rich and so technically accomplished.

I’ve bought all her story collections – Other Stories and Other Stories is the kind of title that really tickles me, that kind of joke is exactly my kind of thing. I also have a deep love for Deborah Levy’s work – she takes no prisoners and writes so incredibly about love and loss and estrangement and politics and places and the world and oh, just humans in general, I can’t recommend her work enough – you might start with her latest novel, Hot Milk. Annie Ernaux is another longtime favorite – for the way she turns daily life, and daily loves, into (French) prose.

My enduring “favorite writers” are Virginia Woolf, Elizabeth Bowen, and Jean Rhys, but I’ve been reading them and writing about them for so long that it’s too late now to say why; it would be like trying to explain why I love my family.

To get away from 20th/21st century women: the French 19th century is my imaginative homeland, I am never happier than when I’m engrossed in a big thick novel by Zola, Balzac, Flaubert, the Goncourts, Sand… I love how richly they imagine the world on the page, I just love all that excess detail, sometimes the psychology is incredibly precise, sometimes the interior worlds are sloppy or missing altogether but as long as they’re saturated in a time and place I’m hooked.

If you had to generalize with abandon, what would you say are some major differences in the writing styles of writers from France and writers from the U.S.? (i.e. do you think there are certain cultural aspects which affect the way people write?)

Okay, with that caveat in place: I like this book by the writer Dany Laferrière, Je suis un écrivain japonais, in which he decides – having been born and raised in Haiti and having moved to Canada in adulthood – that he shall be henceforth known as a Japanese writer. He’s subverting the idea that national identity determines who we are and what we produce as writers, which is a burden frequently and paradoxically placed on non-white authors, who are asked by the publishing industry to write great epics of their homelands – the great Indian novel, the great African novel (as if Africa were one country).

If a writer grows up and lives in the U.S. or the UK, there are going to be certain cultural differences between them, and differences in the way they use English, but for the most part they’re writing in the same language and so I don’t see much of a point in distinguishing between the two, as some prizes do. The Booker caused quite a lot of outrage a few years back when it was opened up to Americans but really how could it not be? I get really irritated when prizes require residency in a given country in order to qualify – there’s so much exchange between English-speaking countries.

But your question was about France and the U.S. – and that, too, is a question of language, and what you’re accustomed to reading, and how. There are certain syntactical and grammatical differences between the two languages that a translator has to get to grips with – French sentences can really go on and on, stacking up the clauses and the comma splices; English sentences tend to be shorter. English has so many source languages feeding into it that it has a really varied texture; variation of texture hasn’t been historically prized in French literature, though it has been in the last 50 years – look at the weird character names in Marguerite Duras, like Lol V. Stein or Anne-Marie Stretter, or Virginie Despentes’ Vernon Subutex, or calling a novel King Kong Theory. There seems to me to be an interesting volition to escape from really Franco-Français sounds. It jars when you see these names but I think French writers are trying to break out of the prison of their beautiful language and make it a bit more ugly and forceful.

How would you describe Paris to someone who has never heard of it?

I’m tempted to write something like Italo Calvino’s Invisible Cities, a novel with descriptions of 55 cities which are all actually Venice, recounted by Marco Polo to Kublai Khan. There are so many Parises, depending on who you ask. Even my own Paris varies radically from day to day. My Platonic ideal of Paris is formed of moments where I’ve caught the setting sun turning the sky pink while the buildings go grey in silhouette, and of stone buildings the color of sand, sometimes with the sun shining so the plane trees cast leaf-shadows on their surfaces, sometimes becoming a darker yellow in the grey or the rain, or a more luminous yellow in the amber-colored streetlights at night. So if you can imagine this changeable stone city, where the light is so amazing they invented photography here, then you might begin to imagine Paris. But it would be an incomplete Paris – it wouldn’t have people, movement, life, sounds, smells, love, anger, conflict, heartbreak, refuse…

What advice would you give aspiring writers?

Read everything and write all the time. Write everything down. Even if you feel like you’re in the middle of something and too busy, just make a quick note on your phone or a random piece of paper and come back to it when you have time. (The nicest thing to do for yourself is to keep a notebook just for this purpose.) Writing is made up of our whole lives, not just the increments of time we give to it. 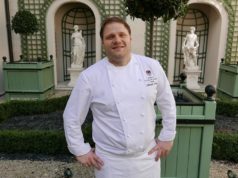 James Joyce in Paris: Following in the Author’s Footsteps on Bloomsday