Interview with Lauren Collins, Author of “When in French: Love in a Second Language” 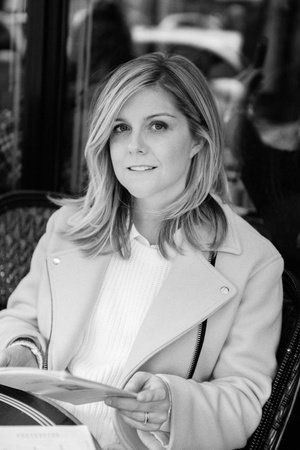 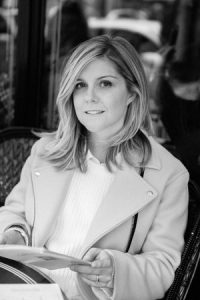 Lauren Collins grew up in North Carolina, has spent time living in New York City, London, and Geneva, and is now living in Paris with her family. As a staff writer for the New Yorker she has written profiles of Michelle Obama, Gerard Dépardieu, and Donatella Versace among others. Her first book, “When in French: Love in a Second Language,” which is both an entertaining personal memoir and a fascinating inquiry into the subtleties and complexities of speaking, living, and loving in another language, has gained widespread praise. She recently took the time to answer Janet Hulstrand’s questions (via e-mail) for Bonjour Paris.

Janet Hulstrand: At the end of “When in French” you, your husband Olivier, and your new baby are moving to Paris from Geneva. Can we pick up your story there? How long have you been in Paris, how do you like living there, and how old is that baby now? And is she being raised bilingually?

Lauren Collins: We’d been living in Geneva for three years–or at least I had, having dodged the previous two, after Olivier’s job moved, by commuting back and forth to London. We can pick up my story there! We’ve been in Paris almost exactly a year now, and I like, love, enjoy, and positively adore living here. I’m a big-city person, and to me it feels like a return to paradise. Yes, you get the crowds, noise, traffic, smells, but also all the creativity and diversity and stimulation that come along with them. I walk out the door every day and have something to look at that makes my heart soar. Our daughter is nearing two years old; Olivier speaks to her in French, and I speak to her in English, trying to avoid, but occasionally succumbing to Franglish. Doucement, that perfectly gentle French word for “gently,” is especially catching. 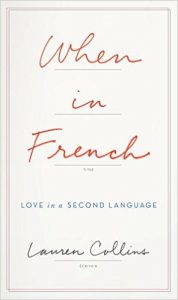 “When in French: Love in a Second Language” by Lauren Collins

JH: When you first met your husband you say that your vocabulary in French was about two words. How would you describe your level of proficiency now?

LC: Other than the obvious challenge of trying to stuff 100,000 new words and their many permutations into an already cluttered 36-year-old brain, I think the hardest thing about learning French has been making peace with the fact that, just as not every English phrase or construction translates perfectly into French, neither does my English-speaking self. This isn’t to say that the meaning is lost, or even the general vibe. But some sort of alchemy takes place in the process of rendering an idea, and even a person, into a second language, and whatever was there initially is fractionally, but palpably, changed. That’s the hardest, the most surprising, and the most wonderful thing all in one.

JH: The subtitle of your book is “Love in a Second Language.” What is the most challenging thing about loving someone whose language, and culture, are different from your own? What is the best thing about it?

LC: Before I spoke French, I had the sensation that Olivier and I were living together in a house, but that there were rooms I couldn’t enter. And then I started learning French, and it felt like finding a room I never even knew existed. The worst and the best parts of loving someone with a different language and culture–or even race, religion, class, or what have you–from yours are linked: you can’t experience the thrill of discovery with something you already knew.

JH: You asked yourself some really interesting questions about language and how it affects human thought as you launched into this study: “Does each language have its own worldview?” “Do people have different personalities in different languages?” and “Could I, would I become someone else if I spoke French?” Now that you’ve written a whole book about this, what conclusions have reached about those questions?

LC: I haven’t metamorphosed beyond recognition, but I very much feel that I’m a different, somehow more authoritative, and often freer person in French than I am in English. Some of this resides in the language. I derive some sense of confidence by association from the tone of French, its lofty abstract nouns, its byzantine salutations and muscular il fauts. In English, I’m pretty obviously a nice blonde chick from the South. In French, I’m a person who, from time to time, can pull off using execrable or formidable as an adjective, and am far less place-able. It’s also situational: in French, I’ve always been a wife and a mother. I’ve always been an adult. A friend pointed out to me that, no matter how much I assimilate, I’ll never have had a childhood in French.

JH: In addition to telling your own personal story of how you came to decide you were going to learn French, and some of the linguistic adventures along the way, you weave in a great deal of really interesting history, linguistics, theories about the psychology of speaking other languages, and so on. What is one of the most interesting things you learned about language and language learning, or maybe just about French, in the course of writing your book?

LC: I remain fascinated by a study I read about that suggested that language is the dominant social marker for children. When a group of five- and six-year-olds were introduced to an English-speaking white boy, and asked who he would grow up to be, they were more likely to imagine him as an English-speaking black man than as a white man who spoke French.

JH: What piece of advice would you have for someone who is at the two-word stage in French, and wants to become fluent?

LC: Good intentions are useless when it comes to getting motivated to learn a foreign language; I think negative motivation–what’s going to happen to me if I don’t–is the thing that really pushes people to progress. So try to put yourself in situations where your lack of language is going to be a drag or an embarrassment, or an added cost. Meet a Frenchman and tell your future mother-in-law that you’ve given birth to a coffee machine, as I did, and watch your language skills take off.