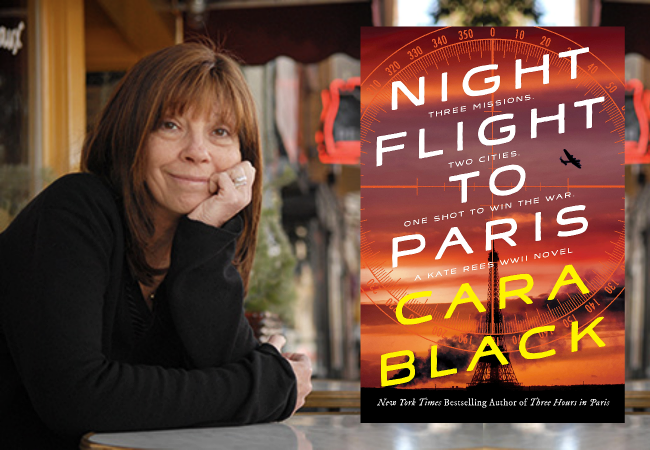 Cara Black is the best-selling author of 22 books: 20 in the Aimée Leduc mystery series, and now two thrillers set in World War II featuring a new heroine, Oregonian sharpshooter Kate Rees. Black’s new book, Night Flight to Paris, will be published in March, and is available for preorder now. She answered Janet Hulstrand’s questions about her latest book in this interview for Bonjour Paris.

Janet Hulstrand: Even in the Aimée Leduc series, you have a lot of figuring out to do based on when each of the books takes place (before or after the euro? before or after the internet? etc.) And each of the stories takes place in a different arrondissement, so there is plenty of research involved there too. Still: it seems to me that in this last book you have set yourself quite the challenge: a story that takes place in Scotland, Paris, London, and various parts of North Africa. Frankly I don’t know how you do it. So the question, I guess is: How do you do it?! And what was most challenging about writing this particular book in terms of the research involved?

Cara Black: I love research. For me it involved visiting the Spy Museum in Washington, DC to see historical spy gadgets, consulting the archives in Paris, and the collections of the Imperial War Museum in London. And walking the ground of these cities and places is research for me – it’s about capturing the play of light, the nuances, and also being in some of the actual places where the war happened. To feel the past on a cobbled street in Paris, sites of the Blitz, and visiting Churchill’s war rooms in London was like walking into another time. I felt like I could almost touch history at the battle sites and memorials in North Africa. So the challenge is that while I visit the places I write about — I crawled in the tunnels and the catacombs under Paris, toured the Hotel Lutetia in Paris where the German Abwehr (military intelligence) was headquartered, and walked the Cairo streets — I didn’t go there in 1942. I wish I could time travel! Any writer writing historical fiction faces this challenge, and we — at least I — do draw on shared universal experiences. I do my best to evoke another time and place.

I got stranded once when I was in Cairo – I was robbed in the train station, and it left me broke. It’s a long story but with a surprisingly happy ending, and a good Egyptian friend I now have to this day. However, this sense of being stranded in a foreign country, where I couldn’t speak the language or even read street signs, brought me emotionally to where Kate might be. The alienation and otherness she would feel, the myriad difficulties she’d encounter with no one she could trust. Her senses on overload from a place as exotic and foreign to her as Cairo was to me.

My eyes were opened reading the accounts, memoirs, and archived letters of young women who worked in the WW2 British Signals division. Only now are various intelligence documents being declassified and made available for research. I consulted files about the listening devices that recorded captured German POW’s and high-ranking military. At one point the POWs were held in the Tower of London – it was bugged to hear what they were saying. You can’t make this stuff up!

Janet: I like the way the plot of this book centers on the importance of the war in North Africa. I wonder how many Americans are even aware of how critical that front was in terms of the eventual outcome of the war.

Cara: That’s so true. To me it’s fascinating to shine a light on the lesser-known theaters of the war. Doing research I learned how crucial the Allied North African operations were. Geographically this was the southern gateway to Europe before D-Day. D-Day gets the most press, but the Allies needed to land in Sicily so they could springboard up Italy to meet those forces.

I grew up watching old WW2 documentaries – black and white ones, and Victory at Sea, since these films were always on TV. I later found out that members of my family had served in the war. My mother’s cousin – my second cousin – had served in Italy and rarely spoke of it. But the more I learned after he passed, it made me curious about this theater of war. And what I never saw in the documentaries were women’s roles in the war. Women were behind the scenes but they were very much a strategic component.

Janet: This is your second book with Kate Rees as the hero: the sharp-shooting, heartbroken woman from Oregon, whose mission is to avenge the death of her husband and baby daughter.  She is a fictional character, but I remember you saying that there is a very interesting history of female sharpshooters in WWII. Can you tell us a bit about that?

Cara: Yes, the Russian army had a unit of female sharpshooters/snipers who plagued the German army. Lyudmila Pavlichenko, a battle-tested and highly decorated lieutenant in the Red Army’s 25th Rifle Division, visited the US at Eleanor Roosevelt’s invitation in 1942 and toured the White House. It surprised me when I did the research for this book, to learn that the US didn’t follow suit. But women then weren’t allowed in combat. In fact, female sharpshooters weren’t even allowed in the Olympics until the 1970 games in Mexico City. What an underutilized resource!

Female sniper Lyudmila Pavlochenko with her rifle in a trench. Photo from Smena Magazine No.12, 1942 provided by Wikimedia Commons

To me it made sense for Kate; she was an Oregonian born on a backwoods ranch during the Depression, and raised using a rifle to protect the ranch and hunt game. She’s got a bit of Annie Oakley in her, and she is descended from frontier women. So she – now a young widow with sharpshooting skills – finds herself stranded in Britain. When the British intelligence service discovers her skills they make her an offer she “can’t refuse.” And what better skill to use against the enemy, the Germans, and avenge her family?

Janet: I’m curious as to how many of the events alluded to in this book are historical. For example, there’s quite a lot made of at least one assassination attempt on Hitler in this story. Were there many of these?

Cara: Absolutely. Historians say Hitler dodged 42 attempts on his life. But these are only the ones made public. One historian told me that Hitler had more lives than many cats. The head of military intelligence was Admiral Wilhelm Canaris, a fascinating but little talked-about figure who had an amazing WWI background; he spoke many languages, knew Churchill, and supported Hitler at first. I felt Canaris needed to be in Night Flight to Paris because he’s an enigma in history. He was loyal to an older Germany, not the belligerent, racist regime of Adolf Hitler. He was arrested in the wake of the July 1944 plot to assassinate Hitler, and executed by the Nazis in the last week of the war. The extent of his involvement in the bombing of Hitler’s headquarters has remained obscure; it has been claimed that he coordinated several previous attempts to remove Hitler, and even tried to broker a compromise peace with the British. But many records were “lost” or destroyed. So we’ll never know.

Janet: Will we see Kate again? She’s quite a character…

Cara: I like secrets. We all have them. Hidden lives intrigue me. Hiding in plain sight. Espionage involves facades that are shown to the world, and a very different reality on the inside.

So I figured, what better place or time for this kind of story, than with the high stakes in WW2? Kate grew up on a Oregon ranch with five brothers; she developed grit, and resilience, and she is driven for revenge after losing her family. It’s tough to know what I can throw at her next: but the war’s not over yet.

You can buy “Night Flight” to Paris here:

Please note: If you buy books linked to our site, we may earn a commission from Bookshop.org, whose fees support independent bookshops.

Previous Article 6 of the Best Cabaret Shows in Paris
Next Article Marché Biron: The Jewel of the Famous Saint-Ouen Flea Market

Janet Hulstrand is a freelance writer, editor, writing coach and teacher who divides her time between France and the U.S. She is the author of "Demystifying the French: How to Love Them, and Make Them Love You," and "A Long Way from Iowa: From the Heartland to the Heart of France." She writes frequently about France for Bonjour Paris, France Today, and a variety of other publications, including her blog, Writing from the Heart, Reading for the Road. She has taught “Paris: A Literary Adventure” for education abroad programs of the City University of New York since 1997, and she teaches online classes for Politics & Prose bookstore in Washington D.C. She is currently working on her next book in Essoyes, a beautiful little village in Champagne.