Home Books Book Review: Paris to the Past 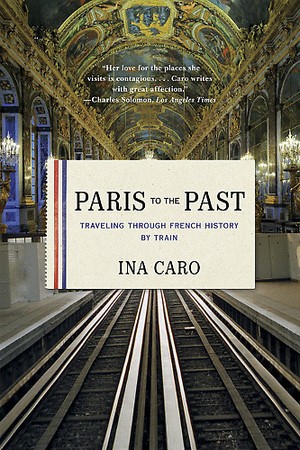 Almost twenty years ago, American writer, Ina Caro, accompanied frequently by her husband, biographer Robert Caro, combined her love of France, travel and history in the unique book, “The Road from the Past – Traveling Through the History of France”, a chronological car tour beginning with the Roman conquest and ending in the late 19th century.

Now, twenty years later, Caro has published another book, “Paris to the Past“, a slight variation on the theme of traveling chronologically throughout French history, by beginning every trip from Paris, by train, on either the Métro, RER or TGV. Again, she is frequently accompanied by her husband and this book is, as well as the first, written with candor, wit, intelligence and gossip.  “I realized I could take either a regular train or the TGV to many of the historic sites I wanted to see in France.  Since the TGV travels at speeds over 200 miles per hour, I could reach all but one of the places I wanted to see in 90 minutes and most places in less than an hour and be able to return to Paris the very same night…usually in time for dinner.” The book also includes maps, the time tables she used, taxi & bus service advice to and from destinations and restaurant reviews for the various sites visited.

Starting in the 12th century at the Basilica of Saint-Denis and ending with the Chateaux of Chantilly, she splendidly evokes, with detailed artistic and architectural descriptions, the age castles, fortresses and cathedrals were built in. Not only will the reader learn about the art and architecture of each building, they will discover the fascinating lives of the people who built them.

“Paris to the Past” is written in five parts.  Part 1 begins with the Middle Ages (Saint-Denis, Laon, Chartres, Reims, The Louvre, Angers, Sainte-Chapelle, Vincennes, Joan of Arc at Orléans and Rouen).  Part 2 starts with the Renaissance (Tours, Blois, Fontainebleau, the Place des Vosges, the Luxembourg Gardens and La Rochelle).  Part 3 begins with Louis XIV (Hôtel de Sens, Vaux le Vicomte, Versailles and the secret castle of Maintenon).  Part 4 starts with the French Revolution (the Palais Royal, Hôtel Carnavalet, Hôtel de Soubise, École Militaire, the Panthéon, the Place de la Concorde, the Petit Trianon of Madame de Pompadour and Marie Antoinette and the Conciergerie).  And finally, Part 5 starts with the Bourgeois Century (Napoléon at Malmaison, Napoléon at Compiègne and the resoration of Chantilly).

Caro’s trips were made over a period of years, but her enthusiasm never waned.  She says, “This journey through time…is possible since i believe that we are a product of our past and all the generations that have come before us.  We are unknowingly touched by ages long ago, sifted through a filter of time, by a mother’s words, books we read, movies seen, our minds becoming the treasure chest or garbage pail of the preceding ages.  We need only a remnant of the past, a castle or cathedral seen through contemporary eyes, to make these past ages come alive.” I, for one, have already planned my first trip from Paris the next time I’m there.

Review: Bringing Up Bébé: One American Mother Discovers the Wisdom of...