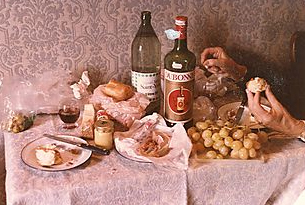 Slowly over the last few days the house is transforming to a lovely little chateaux in the South of France. In the living room, pictures disappear to be replaced with Eiffel Towers or French pictures and paintings. The front window now has a “Bonjour” sign hanging in it, the French flag goes out and there is even a planter with blue, white and red flowers. The dining room now has a Provencal table cloth, and a vase of yellow sunflowers and an old metal bike complete with a baguette and flowers, and then there is the French ornament branch. We all put out holiday theme ornaments, right? After Christmas I save all my Eiffel Tower and French ornaments so they are easy to find for the month of July. A little over the top, me?  No, never…. And then there are the plates. Some say I might have a little problem with plates, you see, I love them…… I blame it on my grandmother; she started it by having plates for every holiday and then passes them on to me. Some like handbags or shoes, but I like plates (ok to be honest, shoes too). So for the Tour de France I bring out all my French plates and then we use them all month. You will see them as I cook through the tour, they are some of my favorite things and I can’t wait to get them out each July.

So in the next day there is the pantry to organize, menus to plan and shopping lists to write. Capers, anchovies, French sea salt and olive oil needs to be purchased in large quantities. Croissants need to be made and maybe I will take a stab at a baguette this year as well. And through it I will listen to Edith Piaf, watch Julia Child and one French movie after another. And I can’t forget the 24 hours of the Tour de France that I will watch over and over. I can’t wait to get up at 4:30am to turn on the TV and listen to the sweet sounds of Phil Ligget and Paul Sherwin guiding us through each stage and town. It is a lot of work to do, but I wouldn’t want it any other way.

With this project I hope to show everybody that there is much more to french cooking then heavy sauces and rich dishes. There are specialties from every corner of the country and each one is full of the amazing stories and people that created them. To start we begin in the south of France where there are amazing fresh flavors with herbs, garlic and olive oil. But more specifically the Tour begins in the tiny country of Monaco, which is much more then the glitz and glamour of the rich, famous and royal. With the location of Monaco on the edge of France there is a heavy French influence in all their cooking and even have adopted some of its neighbor’s treats as their very own. Socca or chickpea flour crepes are a wonderful crisp and savory treat that are best eaten hot out of the pan with a little salt and pepper and even add a little rosemary and although they are national treasure in Nice, Monegasque’s enjoy them as well.

The Tour will be in Monaco for the first two stages and then the head to Nice, Marseille and Montpellier before a trip into Spain, Andorra and then back into France and that is just the first week. There is much more to the Tour then the start and end towns of each stage. There are the small villages in between where you will see people sitting outside their door with a small table, some cheese, wine and a baguette and as the peleton rolls through they see them for a few minutes and they are through the middle of the town and onto the next town were another family awaits their arrival with baguette and cheese in hand. Sounds heavenly to me. I will have to make do sitting in front of my TV with cheese and champagne and some escargot… Vive la Tour!

So here we go, I can hardly wait, check back daily at Bonjour Paris and at my website for my take on the Tour de French Cuisine.