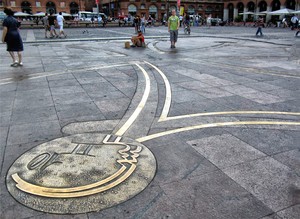 The city of Palladio Tolosa,Toulouse, began at the crossroads of the Mediterranean and the Atlantic on a finger of the Garonne River and its surrounding fertile valley.  After the Romans plundered Tolosa, killing some 20,000 Gauls, the city experienced five centuries of peace under their rule, till the Visigoths claimed her for their own. which was, in turn, reclaimed by the Franks.  In due course, the Arabs attempted to wrest Toulouse from the Franks, but were defeated and forced out of the country altogether.  To secure the city Charlemagne created the county of Toulouse and it became part of the Kingdom of the Aquitaine. By the 12th century the then feudal hierarchy appointed governors, the dynastic Counts of Toulouse to oversee the vast southwest province extending from the Rhone to the Garonne Rivers, and the Pyrenees to the Dordogne. This was the precursor of modern day Gascony.

Under the reign of the Counts of Toulouse, in particular, Raymond VI, the city continued to grow in wealth and stature until a new religion, Catharism, evolved.  The Cathars, centered in the Pyrenees mountains and foothills, were a fundamentalist sect, entirely pacifistic, who followed the beliefs that the humanity of Christ was an illusion, women and men were equal and no tithes or taxes should be collected from its followers.  Their tenets subsequently threatened the Catholic Church, so much so, that Pope Innocent III launched the Albigensian Crusade against them.  Raymond, sophisticated and tolerant of his citizenry, fought valiantly with the Cathars and against what was, truthfully, a hostile land grab by the Church.  He lost a decisive battle to Simon de Montfort and Bishop Folquet de Marseille who, in turn, lost their hold on Toulouse in 1229 to King Louis VIII and it quickly reverted to the French Crown. 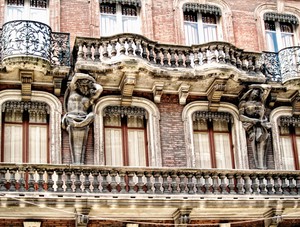 Languishing in the remote southern part of the country, Toulouse became a cultural and economic wasteland.  Five major fires followed over a period of time, devastating the municipality, and forcing the Crown to decree that all buildings, henceforth, would be erected from stone or brick.  Over a million rose colored bricks now comprise the present day Toulouse, known as La Ville Rose. In 1560, a locally grown crop, Pastel, used for dying Indigo, became a catalyst for increased wealth and trade, and in 1666 another local endeavor, construction of the strategic Canal du Midi, brought further commerce to the city’s hub by joining the Mediterranean and the Atlantic via the Garonne River.

In 2012, the city of Toulouse boasts nearly 70% of France’s high tech, aeronautical and space industry.  It owes it current status to Clement Ader, who in the 1890’s flew the first steam powered plane in France.  By WWII, Toulouse had its own aircraft factory, its moniker easily segueing from The Rose City to The City of the Air.  The European Space Shuttle, the Concorde and Airbus jets have propelled Toulouse into its current position as the fourth largest city in France and Capitol of the Midi-Pyrenees region. Today, Toulouse is a multi-cultural city, home to descendants of the Spanish Civil War and the Pied Noir, refugees from France’s war with Algeria, as well as over 100,000 university students and over 750,000 local inhabitants. 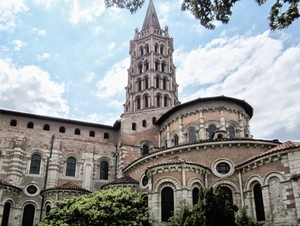 Some points of interest while visiting this fascinating city are the Place du Capitole in the heart of the centre ville with its sprawling bronze Cross of Languedoc embedded in its 5 acre square, paintings in the Gallerie du Capitole, particularly those of the Salle Henri Martin, The Pastel Palace, now The Hotel Bernuy and the Basilica of St. Sernin.

Visiting Beaune – An Overview of the Côte de Beaune