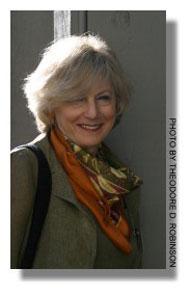 Allow me to introduce myself to those among you who were not Bonjour Paris readers in the years when I contributed excerpts of my Around and About Paris books to its pages. My collaboration with Bonjour Paris stopped for no ill will on my part but for lack of time. I am not sure I have more time at present, but Karen urged me… so I’ll do my best.

For those among you who don’t know my writing, some background information may be of some interest. Contrary to what my readers and interviewers tend to assume, my involvement with Paris was not born out of passionate love for the city but out of exasperation, and writing about it was a therapy of sorts. As a matter of fact, Paris was a huge letdown when I first disembarked at the Gare du Nord: as a naïve teenager I expected a Vogue Magazine Paris, not a grotty working-class neighbourhood! Besides, nobody had prepared me for the ill-tempered city it was in those days. Given my distaste for the place on my first visit, I cannot for the life of me say why I came back and why I never left. I am not quite sure what magnetic force drew me in but having mulled over this for so many years, I believe it was the amplified density of human experiences that ultimately makes Paris the unique city it is and eventually gets under our skin.

I started writing about Paris in order to figure out the place and its people and thus get them out of my system. Rather than tackle them frontally, which would have kept me in a confrontational mode, it occurred to me that by exploring the city I might reach the same objective in a more fun way. This led to an overwhelming, fifteen-year project which I had not anticipated, by the end of which time I had been living in Paris for over thirty years. As I travelled deeper and deeper into into its different facets, it got hold of me insidiously and I became increasingly indulgent towards its flaws and appreciative of its virtues. Rather than writing about it as therapy, I found myself embarked on a life-long quest, because although I know it very well compared with most people, one never knows Paris fully, which is one of its beauties. There is always more to dig and probe into, which to me is part of the addiction. To quote the ultimate Paris lover, Victor Hugo, “He who looks into the depths of Paris grows giddy,” the epigraph I chose for my books because I could think of no other that would sum it up better.

Paris has opened up to the world since the days of Victor Hugo and in the last ten or fifteen years has engendered a pleasanter and more laid-back species of denizens. Thus, for example, although the “Bonjour” greeting is still very much alive, the more formal “Madame”, “Monsieur” or “Mademoiselle” bits are used more loosely. Most Parisians speak at least some English, making the city more user friendly to foreigners. In short, present-day Paris is less blunt but increasingly bland, no longer polluted by the smoke of Gauloises but watered down instead by Starbucks coffee…. (Remember, the first McDonald’s made their appearance already back in the 1970s.) You can’t have it both ways.

The gentrification of Paris, however, is not a recent phenomenon. As a matter of fact, the regeneration of Paris was on the agenda of the French Revolution. It was tackled timidly by the following regimes and radically under Haussmann. Haussmann, however, did not eradicate the entire existing urban fabric. Much more of the old city was preserved than people realise. His genius consisted in weaving together the old and the new seamlessly, thus preserving an overall cohesion. Although the bustling medieval flavour was destroyed in some places, elsewhere it survived. Closer to us it was helped by the fact that, unlike London, Paris was not bombed by the Germans. Nevertheless and inevitably, old neighbourhoods do get cleared over time, either because they genuinely threaten ruin, or because of the pressure of the speculation market. In 20th-century Paris such regenerations began in the 1960s and would have begun earlier if it hadn’t been for the war years. One must bear in mind, however, that the younger generations have no reference to the past, they do not bemoan (unlike me) and live comfortably in the present environment, spending time at Starbucks preferably to traditional French cafés.

I am currently preparing an electronic version of Around and About Paris and re-walking Paris for that purpose. It’s a mixed experience of joy and sadness, the joy of seeing an old courtyard, bistrot or artisan’s shop still standing unchanged, the sadness over those that have disappeared. Such is life. Besides, this was also the case in the 1980s when I began to write my books. Like all organic life, Paris is a city in the making and in constant mutation, and some of it is good. Renewal also brings hope and freshness. Some places look better than they used to, some new gardens are exquisite, here and there a shabby wall has been embellished by an artist unknown to me. And despite the reign of commerce and electronics, there are still so many bookshops in Paris! It is heartwarming to see that it remains a place of intellectual pursuit and debate, inhabited by a population that actively cares about politics and societal issues. Have no fear – the constant aggravation caused by strikes and protest demonstrations is proof enough that the passionate Gallic spirit is still very much alive in its capital city as well as in the rest of the national territory. The next nationwide strike is scheduled for this coming 23 March.

Thirza Vallois is the author of Around and About Paris, Romantic Paris and Aveyron, A Bridge to French Arcadia.
www.thirzavallois.com