Home Archives Take in the Cluny: Museum of the Middle Ages 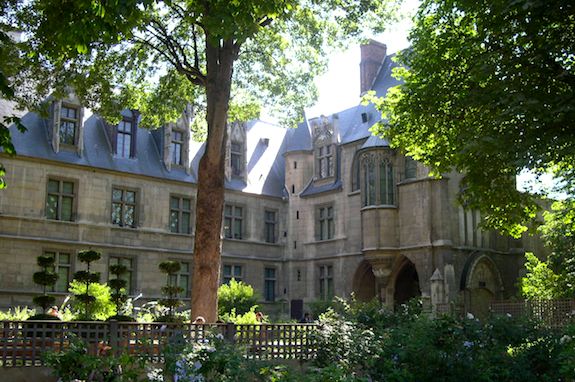 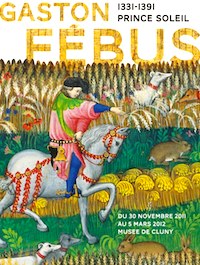 Current temporary exhibition until March 5, 2012: Gaston Fébus (1331-1391), featuring an impressive display of illuminated manuscripts and objects related to this 14th century feudal French lord renowned for his book about hunting. The exhibition was organized by the Musée de Cluny, the National Library of France, the National Museum of Pau, and the Grand Palais.

One of the world’s best examples of medieval art is included in a 15-century building on the site of the Roman-Gallo baths.

Musée national du Moyen Âge, or the Cluny Museum, as it is more commonly called, was once the home of Mary Tudor, widow of Louis XII. The building is magnificently preserved and is almost on the spot where the first part of the city was built. The remains of that period, and later centuries, are waiting to be rediscovered.

One of the world’s best examples of medieval art is included in a 15-century building on the site of the Roman-Gallo baths. 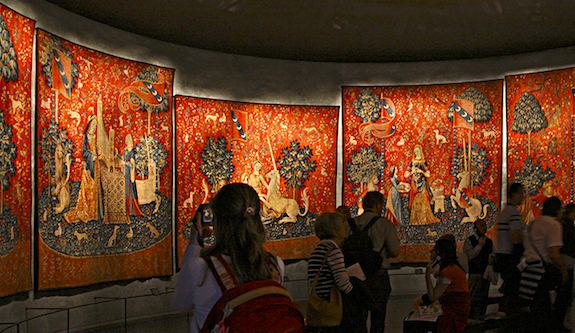 The Unicorn Tapestries, are in one room and can be easily seen. Their themes include Taste, Learning, Sight, Smell, Touch and Desire. The Unicorn has been interpreted as Religious, a Christ-figure, and as a lover. The full story of the tapestries is brought to light in the writings of George Sand.

This is a must for people of all ages but especially for the young. While examining the tapestries, I watched a young man with two little girls under the age of ten. He painstakingly pointed out all the things about the Unicorn tapestries, their age, manufacturing techniques, the colors and the interpretations.

The two girls were rapt in the explanation and stared at the works with that serious, wide eyed stare of an interested child. I had a feeling that the father’s explanation would be long remembered. It helped me realize that this museum was good for people of all ages. Maybe you’ll take your children or grandchildren.

Take in the Cluny and the medieval mansion that houses the remains. It should be on your list of “must-see” sites. You won’t be disappointed.

The courtyard draws you in. It is a perfect architectural example of 16th century design. It was erected by Jacques d’Amboise, Abbot of Cluny. The cobblestone Cour d’Honneur contains flamboyant Gothic building wings with seashell motifs popular at that time. There are gargoyles and turreted walls with dormer windows.  It was seized during the Revolution, rented in 1833 and bought by the government in 1842.

Roman Baths date back to 200AD

The Roman Baths date to 200 AD and included a Palestra, a tepidarium, caldarium and frigidarium to close the pores in cold water.  It was once decorated with ancient fish prows of Paris boatmen. The area around the building is authentic Middle Ages, even though the gardens were rebuilt in the year 2000. It is neat, trim and perfect for photography in the shade of chestnut and sycamore trees. 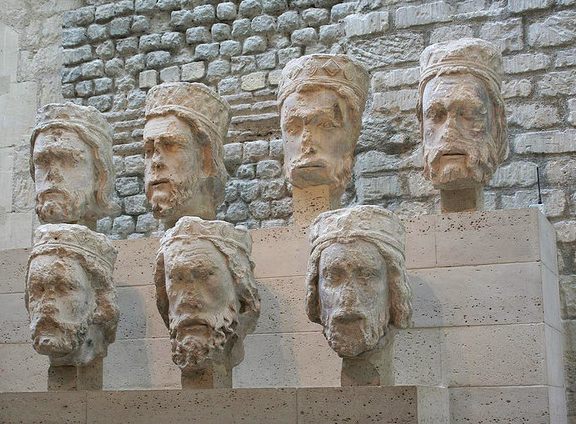 Artifacts in the permanent collection

There is also a gallery of Kings of Judah, circa 1220 (above). During the French Revolution, citizens frustrated by feudalism and other injustices damaged the Notre-Dame cathedral and its statues. In the late 18th century, 28 damaged statues that represented the kings of Judah were removed from the church and sold as scrap. In 1977, a construction project on the other side of the Seine near the Opéra Garnier unearthed some of the kinds’ heads and parts of other statues. It is considered one of the most important discoveres in archeological history.

The Mansion of the Abbots of Cluny

To appreciate all exhibits we recommend at least 2 hours; history buffs should plan an entire afternoon. During the warmer months you may want to spend time in the garden, but even if you are visiting indoors there are places to sit and relax. You may be there when there is a concert or lecture, which also gives you time to relax.

Leave the Unicorn Tapestries for the end of your visit. A hand guide and a seat make the viewing more comfortable.

Accessiblity: Stairs & other obstacles make moving beyond the courtyard difficult for those with mobility issues. Watch for steps in the dark, slanted floors & uneven cobblestones that are not always obvious. Visual aids available.

Arnie Greenberg is a retired professor and French history expert who has written novels and many stories published by BonjourParis. Please click on his name to read his stories and to learn more about him.

Catch up on the most fascinating French history…click on an image for details.