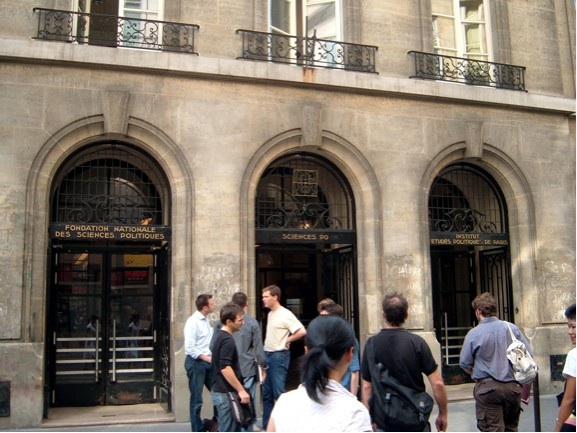 The vocabulary that one acquires being sick in France! A recent exchange with one of my French-American friends via Facebook went something like this: “What the heck is an argousier? Word reference tells me it is a ‘sea buckthorn,’ but as you might imagine, that is totally unhelpful!” As it turns out, this flavor of Ricola lozenge is some sort of vitamin C-rich orange fruit that apparently I have never encountered in my English-speaking existence.

My first encounter with the French medical system was not horrendous, but all the same, I would have preferred to avoid it. For about half a week before, I was having difficulty breathing, and strange-colored things were oozing out of my nose.

I went to dinner with a bunch of Americans I had never met before. They were mainly from California and the Deep South. They couldn’t stop remarking about my mystifying accent when I spoke English and how they thought I was French. You know…that New York/Maine accent…. Actually, my voice had become so distorted from a painfully sore throat.

I figured that was as good a time as any to go to the school nurse at Sciences Po. At least that way if I lacked the vocabulary to thoroughly describe my symptoms it wouldn’t matter because she wouldn’t be able to really hear me. It did not bode too well that as I walked in she was coughing loudly and clearly had more pressing priorities, like her lunch. After a brief conversation, me whispering hoarsely in French, she gave me the information to see a nearby doctor without having to make an appointment.

The wait was only about 45 minutes, which I found to be incredible, considering that back in Maine sometimes even with an appointment I’ve had to wait longer at my primary care physician. It’s also probably not worth my while to seek reimbursement from insurance, as the French doctor only cost 22 euros, and the myriad of medications he prescribed only cost an additional 14 euros.

He was totally baffled, though, that for somebody with a penicillin allergy I had never heard of roxithromycine. Sorry, it does not exist in the good ol’ U.S.A, as I suspected, and as good ol’ reliable Wikipedia has confirmed. Well, after some of that fine stuff, and some steroids, among my laundry list of other prescriptions—this really is a country of hypochondriacs—I am finally “better.” Whatever that means….

First I was sick. And now I am simply tired. There is a big difference between vacationing here, or even studying abroad for a semester here, and actually being enrolled independently in a degree-granting program for a masters degree in law from Sciences Po. To put some of my disillusionment into context, I took the New York Bar Exam and two weeks later was on a plane to France. The semester started. I fell sick. I fell behind.

Paris sounds romantic until you remember that each week I have twenty-four hours of class, in ten different subjects, so many that I can’t choose which is the most meaningless. Dispute Resolution? Corporations? Macroéconomie and its associated conférence? Droit administratif? Français? Persons/Personhood: A Comparative Study? Droit des contrats? Droit international privé? Español? Oh, and these are all “required.” There is no way that I can get out of them. Actually, there is one way….

It’s called dropping out. And that is precisely what I intend to do after this semester. The approach to education is extremely theoretical, extremely philosophical, extremely historical; the only concrete thing I will have taken away this semester is roughly $20,000 in additional student loans. While I love Paris and would love to make a life here, this degree program is clearly not the way to start to do so. It looks like come January/February, unless I can find some sort of employment that would permit me to be in France, I will be heading back to the States for good.

In the meantime, I’m trying to make the best of everything. I should get back to the job search…unless somebody reading this wants to hire me? In France? Or anywhere?