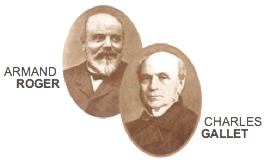 You wouldn’t think that packing perfume was quite as important as packing heat when going off to war, but Napoleon apparently did, which is why, in 1806, court perfumer of Europe Jean Marie Farina created his “Eau de Cologne rolls” – round, tapered green bottles of his signature eau de cologne that could be slipped into the boots of Napoleon and his officers. Napoleon reportedly used at least 60 bottles a month. Who knew warriors could smell so good? Who knew they cared so much?

The company, which is now owned by cosmetics giant L’Oréal, started producing the round, perfumed soap it’s known for in 1879. Originally wrapped in pleated paper and a wide, ornate paper ring, the paper ring is now gone, a concession to the costs of modern production. But the fragrance remains deliciously the same.

The company has changed its packaging in other ways with the times, as well. In 1930, for example, Roger&Gallet engaged the best Art Deco artists to decorate its packaging, and in 2007, the company chose award-winning French designer Martin Szekely to update the packaging to reflect both contemporary tastes and the constraints of contemporary manufacturing costs.

The art of perfume making goes back at least 4,000 years. In ancient times people used herbs and spices, including almond, coriander, myrtle, and bergamot. A Persian chemist introduced the process of extracting oils from flowers, and he first experimented with the rose.

In the 16th century, Italian refinements to perfumery were taken to France by Catherine de Medici’s personal perfumer, setting France on its path to becoming one of the European centers of perfume manufacture. The cultivation of flowers for their perfume essence grew into a major industry in the south of France, which it continues to be, today.

All Roger&Gallet products are produced in France from ingredients sourced worldwide, including natural essential oils. The intensity and longevity of the aromatic compounds used determine how long a fragrance will last. The perfume concentration of Roger&Gallet fragrances, for example, ranges between 3 and 10 percent. The soaps are perfumed “down to its very heart,” according to the company. 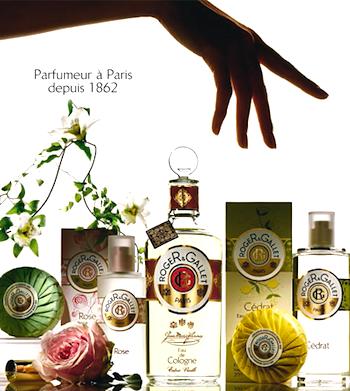 Roger&Gallet products are widely available in France, including at upscale department stores like Galeries Lafayette and pharmacies. The 150-year anniversary of the company will be in 2012 and the company is planning to reissue the Eau de Cologne rolls used by Napoleon and his men and is planning to launch an e-commerce web site later this year through which customers can purchase their full line of products.

You need not go to battle to savor Roger&Gallet fragrances. They are yours for the purchase at your local vendor or home-delivered from here. Enjoy!

Photo credits: Publicity photos were used for this story, courtesy of Roger&Gallet.

Diane Stamm is a writer and Francophile who lives in Washington, D.C. Please click on her name for her complete profile and to read her other stories published here.

Yes, you can get Roger&Gallet from France in our Cosmetics, Parfum & Style section…

A Normandy Garden Blooms in Winter