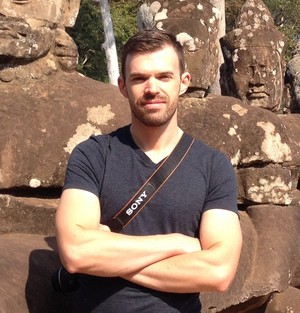 David Blanc has been a Special-Ed teacher in the French school system and a radio enthusiast for 15 years. He set up several radio stations wherever his main job took him. Now based in Paris, he has set up a not-for-profit radio station, World Radio Paris, serving the English-speaking community which began airing in September 2013 and is poised to begin terrestrial transmissions on the Paris airwaves in the summer of 2014.

What are you most proud of (in terms of your own achievements)?

I’ll be completely proud of it on June 20 when I actually see it come true, but I guess that obtaining a license from the French Government to broadcast a radio station in English in Paris has been somewhat of an achievement. Until now, no radio station has been granted a permanent license to use terrestrial airwaves (FM, DAB, AM…) to offer programming in English 24h-a-day, including the live rebroadcast of foreign stations like the BBC and NPR. It has been lengthy, sometimes even tough, negociations, but all worth it. Paris was one of the only European capitals without news in English on the radio dial. Over 200,000 expats are eager to easily tune into local news-you-can-use and international shows they used to listen to at home, like Fresh Air, Car Talk and All Things Considered.

I’m patient. The French red tape is famous worldwide for a reason !

Were you born in Paris or moved there?

I was born in beautiful Provence, in the South of France. I moved north for work after four years in Africa. People come to Paris for work, but contrary to most, I love Paris and have always wanted to stay here. There is so much history and culture at every street corner, it’s just impossible to ever get bored here.

If you could share a coffee or bottle of wine with a fellow Parisian from past or present, who would it be?

I think he or she would be someone who’s dedicated their life to others, like L’Abbé Pierre. I think the French society is on a dangerous slope right now, leading to extreme individualism. I would like to be reminded of what it is that makes us humans from time to time, just like when one comes back from a trip to India. Meeting l’Abbé Pierre, when he was still with us, would have been a well-needed booster vaccination against a very contagious disease in Paris called “selfishness”.  (Abbé Pierre was a religous man, the founder of the Emaüs community. He spent most of his life helping the needy. He was repeatedly elected “France’s most respected man” until his passing, in 2007. One of the top 5 national heros of the 20th century).”

Bertrand Delanoë, our outgoing Mayor. He’s far from perfect, but he stands by his values, has done a great job at giving Paris back to all Parisians, and has shown a great deal of courage during his years in office.

What’s your favorite thing about Paris?

Just one? Tough question. If Paris is seen as an object, then it would be its Haussmann-style buildings, which really make it unique and easily recognizable. As an ensemble of humans, I think I am very fond of the group of people called the “bobos”, left-wing educated middle-income socialists commonly found in not-so-posh areas of the city. They really make the city vibrant and almost decadent.

What’s the one thing that every Parisian should own?

A yearly subscription to Velib. The best 30 euros you’ll ever spend.

An item you can’t live without?

My pain au chocolat. Every Saturday morning I do my grocery shopping at a street market. I can’t start that routine without having my oldest childhood memory revived: having a warm pain au chocolat from a good baker’s. That’s why I can’t live abroad. Seriously. It just doesn’t taste the same.

Any pet peeves about Paris?

I think Parisians now are just annoyingly fearful of others. When I am in San Francisco, engaging in a conversation with your traveling neighbor on Muni (subway and busses) is a very normal thing to do. Pleasant even. Try it here! You’ll be regarded as a dangerous weirdo. This needs to change. We’re all on the same bus…

Favorite place to go for lunch?

There is this wonderful little Thai place by Palais Royal… their red curry is to die for, and for a 10 euro meal, it’s a bargain.

I like L’olivier near Mairie du 18ème: Cuisine from my home town, with fresh olive oil and plenty of accompaniments.

Best place for coffee or drinks?

L’étoile Manquante, on Rue Vieille du Temple. I just love the Marais. This café is at the crossroads of the Jewish and gay areas, without belonging to either, a great place for coffee, « waiting for a star to fall »…

I go once a year to Zara, and that’s because I need clothes, otherwise I’ll pass on that activity.

On Rue du Poteau, a regular street, in a regular neighborhood, with regular people. One of those rare places where you are not likely to bump into another tourist. Not that I have anything against them. But that part of Montmartre, the north side, is very cosmopolitan, mixed, yet very French and adorable.

I know it’s cliché, but I love Chateau Rouge. I lived the best years of my life in Africa, and I miss the warmth of its people. I make it a point of going there for fresh fish or exotic produce (yam, plantain and sweet potatoes make a divine gratin), and have a delicious Yassa chicken from a tiny Senegalese restaurant, where every new client is greeted as if he had been coming there for years.

Most fun thing to do in Paris?

Biking down Canal St Martin. It’s a lovely ride all the way to Bastille.

What’s the “touristy” thing you’d secretly like to do in Paris but haven’t?

I’ve never had the patience of waiting in line to go up Notre Dame towers. But I’d love to get a closer look at those mean-looking gargoyles.

The top of the Eiffel Tower is just breathtaking. I always volunteer to take friends or family passing through Paris up there, it’s sheer engineering genius. Having saved the tower from demolition in 1909 is the only reason why I don’t completely despise the Army.

If you pluck a grey hair two will grow. Haha, seriously, I think everyone should travel abroad to really appreciate what we have here in France.

Three words to live by.

Liberté, Egalité, fraternité. None of them being fully respected.

One thing you could change about the world?

One thing you wish Parisians would stop whining about?

Wait a minute… the question contains  a major contradiction! “Stop whining” and “Parisians” cannot be in the same sentence. Besides, I am so used to hearing them I end up not paying attention, it’s part of the picture. And I’ll tell you what: it’s a good thing. The French got where they are today because of their character. Love it or leave it…

I split them in two for good conscience: 12,50 to Restos du Coeur (an NGO serving food for the needy) and 12,50 on a pack of seven Pierre Hermé macarons, necessarily containing one Caramel and one Passion fruit filling surrounded by chocolate cookie-cakes…

“Me talk pretty one day” by David Sedaris. Funny, sweet ; Always cheers me up.

Favorite city to visit (aside from Paris)?

Is there an annual event like a festival, gala or an exhibit that you look forward to every year?

Fête de la Musique. June 21. It’s usually rainy and cold, but when it’s not, it’s fantastic. The whole town is outside, enjoying the first day of summer, with an improvised band playing at every street corner.

Sainte Chapelle. The most amazing man-made building I have ever seen, Taj Mahal included.

David Blanc has been a Special-Ed teacher in the French school system and a radio enthusiast for 15 years. He set up several radio stations wherever his main job took him. Now based in Paris, he has set up a not-for-profit radio station, World Radio Paris, serving the English-speaking community which began airing in September 2013 and is poised to begin terrestrial transmissions on the Paris airwaves in the summer of 2014.

Sunset in the 16th