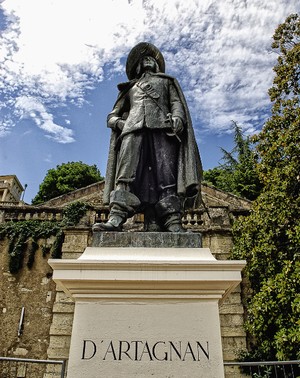 “All for one and one for all!” On the road to Pays d’Artagnan

As you drive through the remote, southwestern French countryside, down narrow plane tree-lined allées past villages shrouded in mystery, you get the sense that the area looks much as it did during the time of d’Artagnan, one of its most renowned heroes. He was not just a fictionalized character from the Alexandre Dumas novels, but a real person named Charles Ogier de Batz-Castelmore d’Artagnan, a valiant soldier who rose to the rank of captain-lieutenant in the prestigious French Musketeers, second in command to the “Sun King” himself, Louis XIV, who was by title captain of the Musketeers.

D’Artagnan was born in 1611, son of Bertrand de Batz and Françoise de Montesquiou d’Artagnan. In his twenties d’Artagnan traveled to Paris and became one of the Musketeers of the Guard, a military branch of the Maison du Roi. He lived a life of daring and espionage, reporting to Cardinal Mazarin and with a key role in the imprisonment of French finance minister Nicolas Fouquet of Vaux-le-Vicomte. In 1655 d’Artagnan became captain of the Musketeers and in 1667 he was assigned the role of governor of Lille. Longing to return to the exciting life he once knew, King Louis XIV returned him to the field of battle during the Franco-Dutch War, where d’Artagnan was killed in 1673 at the siege of Maastricht.

Starting from Toulouse, drive along its périphérique to the N-124 heading west toward Auch. Now your adventure to find the home of one of France’s favorite sons has begun. White clouds float on deep blue skies, velvet green rolling fields stretch to the horizon and like a breath of fresh air—you have entered Le Gers, the Tuscany of France, la France profonde, a place where most French people dream to retire. This department in the Midi-Pyrénées region is the most rural and least industrialized in France, isolated from main highways and train lines. The Gersois have the longest life spans in of all in France.

Stop in Auch, the unofficial capital of the Gers, to view a bronze statue of d’Artagnan. You’ll reach Auch in less than a 45-minute drive. It is a pleasant, though not a terribly charming, city perched above the Gers River. It has no market economy to speak of except farming and government, with the same population mix since the 14th century. Cathédral Ste. Marie d’Auch at Place de la République was the last to be built in France. (Editor’s note: take a virtual tour here.) Its 18 Renaissance-era stained glass windows by Toulousain Arnaud de Molès rival the most beautiful in the world. You’ll find the bronze statue of d’Artagnan located at the base of the cathedral’s monumental 370-step stairway. 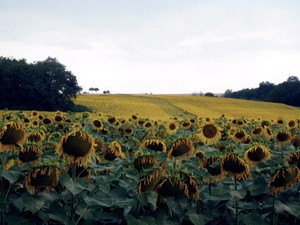 Leaving Auch, especially in July and August, elysian fields of magnificent and enchanting sunflowers stretch to the horizon. Head farther west on the N-124 through the pretty village of Vic-Fezensac, where each July the full-blown Tempo Latino Latin music festival fills the village with rhythmic red-hot salsa and legendary wild dancing in the streets to all hours of the morning.

As you exit Vic-Fezensac take D-37 south toward the Gers village of Lupiac to visit d’Artagnan’s birthplace and Musée d’Artagnan, dedicated to d’Artagnan’s life and legend. The museum is located in the Chapelle Saint Jacques, built by d’Artagnan’s uncle. In the warm weather take the short drive to Lac de Lupiac, a large leisure lake with a fine sandy beach good for swimming, fishing, canoeing, and kayaking lake with a bar serving drinks, food and entertainment throughout the summer. 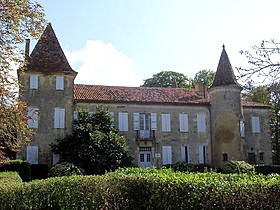 Another 10-minute drive south on the D-102 is d’Artagnan’s birthplace Chateau de Castelmore (now privately owned). Continue on D-174 then D-20 to Aignan, one of the loveliest villages in the Gers and the original seat of the Counts of Armagnac. Aignan was both sacked and burned by the Black Prince, the eldest son of King Edward III of England, in 1355, but its 12th century church and arcaded square still remain today. Aignan offers two vide-greniers (flea markets) during the summer—one of the best kept secrets of the area. Browse the stalls for silver and lace or relax at an outside café over a cup of delicious organic coffee and a freshly baked croissant. Your mouth will water at the memory.

Le Gers is also the home of Armagnac—a distinctive type of brandy or eau de vie—usually made from a blending of the region’s Armagnac grapes. Handmade and produced in local distilleries, throw caution to the wind and stop for a tasting of the elixir of the gods before heading back to Toulouse. Armagnac is the oldest eau-de-vie distilled from grapes in the world. Rumor has it that one of the local producers stores his Armagnac in four great oak barrels named Athos, Porthos, Aramis and d’Artagnan. If you’re lucky enough to find this particular distillery raise a glass to the famed d’Artagnan, “One for all and all for one!”

Admission: A small donation is suggested.