Home Archives Book: Paris Under Water: How the City of Light Survived the Great... 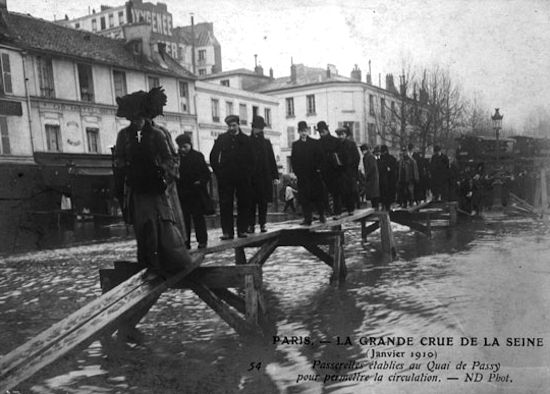 Paris flooded in 1910. It was not the worst flood in the city’s history, nor the last. The worst flood, by a couple of feet, was in 1658, and the last was in 2010, the centennial year—but that was in a movie, so it doesn’t count. As far as I know, la crue of 1910 was the first major flood of the Seine after Haussmann’s great urbanization program, meaning the city was more populous and much denser; the population at the time was at least 2.5 million, about a quarter of a million more inhabitants than there are today. The eight- and nine-story stone houses that went up in that era had replaced buildings most of which were only two or three floors. More people suffered than in earlier floods.

In Paris Under Water: How the City of Light Survived the Great Flood of 1910, Jeffrey Jackson gives a workmanlike and generally humane—or rather a human-touch—account of the flood and its long aftermath. He begins, naturally, upstream, about fifty miles east of Paris where a combination of heavy snow melt, rain, and bad hydraulic engineering got things going, then follows the destruction through and past Paris. He focuses, at least here and there, on a few people who left written accounts, some of them quirky, including the poet Guillaume Apollinaire’s description of a rescue by jerry-rigged boat or the salvaging of a dry mattress. One man, a clerk at the Assemblée Nationale, went out one evening a week or so after the flood began and the food had run out, to shoot a pheasant and a rabbit. Perhaps Paris wasn’t all that urban after all.

But clearly hunting small game was not going to feed Paris, and food became a problem very quickly. The various merchants who sold potatoes, wine, meat, and vegetables stored their goods in their cellars which flooded almost immediately. And without coal, also stored in flooded cellars and the primary cooking fuel at the time, cooking whatever there was became difficult, impossible for many. Electricity failed—a practical catastrophe and a blow to Paris’s prestige as the most electrified city in the world at the time. The Eiffel Tower was and remains the symbol of the Exposition Universelle of 1889, but the greater achievement of that period was the electrification of nearly everything. A point of pride and, after twenty years, something people took for granted until the generating stations failed when the Seine rose—and with them the pumps to keep Paris dry, the telegraphs and telephones for communicating emergency information, and the pneumatique, the compressed-air mail system that was used more or less like proto-text messages. 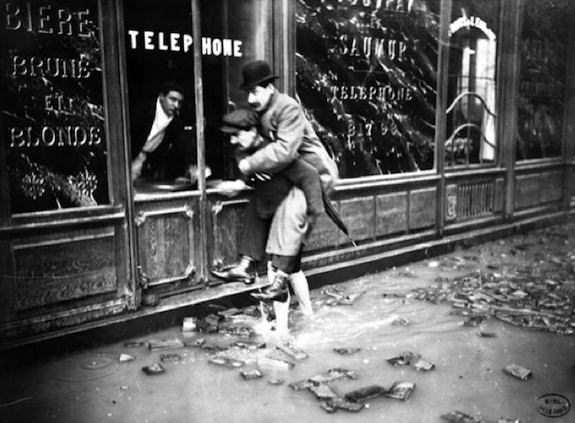 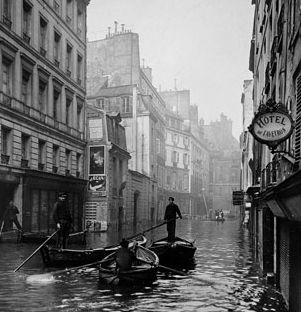 To give periodic images of the progress of the flood, Jackson focuses on the Zouave, one of the statues standing on the footings of the Pont d’Alma. The water rises and rises day by day—first to his ankles, then his knees, and ends up at his shoulders, about 28 feet above the normal level of the Seine. It helps the reader to visualize the steady rise of the river and its sheer quantity. At that height, a canoe could not have cleared the arches of the bridges of Paris.

Still, there were comparatively few deaths (though horrifying loss of property, beginning with simple things like bed linen and clothing), and Jackson points out that le système D came into play. The D is for débrouiller and means more or less make do or at least muddle through, and the Parisians did. They built trestles on sawhorses, called passerelles, so they could walk about the flooded streets, organized boat patrols to rescue the stranded, and organized posses to chase away and, evidently on a few occasions, beat up or even lynch looters. It’s a good story. And Jackson has the facts necessary to get the story across.

It’s a pity that he is not a particularly good storyteller. He is given to sentences that can stop you (or at least me) in the middle of a sentence and make you gag. For example, he talks about the Eleventh Arrondissement, my part of town, as a place “where gangs of ruffians lurked.” When was the last time you happened to encounter ruffians? And were they lurking? He needs to tell us that Mona Lisa’s smile is “mysterious” and the Nike of Samothrace is “famous,” and gracious me, I was glad to know that. Sometimes his history is a little odd or just off. Another example: “Gardens and farms in the towns outside Paris normally supplied part of the city’s fresh food, but these were now among the most devastated” (italics added). No, they supplied just about all of Paris’s fresh food since, despite the odd rabbit and hare, there was no game to be shot and no longer any place to keep a cow or a few chickens or a vegetable garden in Paris in 1910.

I would have liked to see more illustrations from contemporary sources, but the dozen and a half pictures from postcards, newspapers, and posters give the flood a reality beyond words. If you want to see a more comprehensive gallery of contemporary pictures, try these.

But if this is a period of Parisian history that is unfamiliar to you, you will profit from reading Paris Under Water. If nothing else, it could whet your curiosity and lead you to other sources while giving you a still more rounded idea of what life in Paris has been and what it continues to be. After all, there were pretty fair floods in 1988, 1999, and 2001. And as we always say, on ne sait jamais.

Thierry Picot is a franco-américain who took early retirement from academia, where he taught medieval history and Romance linguistics. Please click on his name to view his profile and other stories published in BonjourParis.