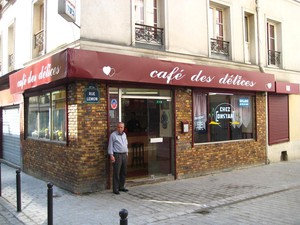 At the Café des Délices on the corner of the Rue Dénoyez and the Rue Lemon, a man stands in the doorway and surveys the scene in front of him. How quickly things can change, he must think to himself as he draws on his cigarette. Opposite the café is the Piscine Alfred Nakache. “A piscine in the Rue Dénoyez!” people scoffed (“Dénoyez” sounds like “the drowned” in French), but urban joke or otherwise, the pool has brought even more people to the street, perhaps today one of the most photographed in the city. 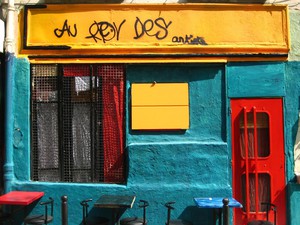 A few short years ago the man at the café would have seen nobody walking around here. The shop units were locked up and shuttered down, and the street was little more than a thoroughfare of crumbling walls and broken windows. Little indeed to remind people of its more glorious past.

In 1830 the various bars situated here were constantly full. The street was a part of the town of Belleville, just outside of the old Fermiers Généraux city limits, and safely away from the heavy taxation of Paris. People came here from the city to drink and dance at La Folie Dénoyez or the Ramponeau cabaret, taking advantage of the cheaper wine.

When, in 1860, these boundaries were removed and the Rue Dénoyez was absorbed into Paris, it quickly went into decline. With drinks at the same price as elsewhere in the city, there was no longer any reason to come.

Through the long years of decay, only bars such as the Café des Délices provided fountains of life in the quartier. It became a place where Tunisian men gathered to drink coffee, play cards, or watch football matches on flickering television screens. Alongside were no-star hotels with rooms rented out on long-term deals to families with no other options, and shop units offering low-cost long distance telephone lines. But then the artists started to arrive. 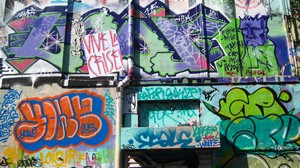 One at first, a sculptor or painter perhaps, taking advantage of a disused shop unit. Others followed and soon they were painting the units in bright colours and pasting shells and tiles on the walls outside. Curious locals began passing this way again, stopping from time to time to look in the windows. It wasn’t until the grafitti artists arrived, though, that the street was truly reborn.

Grouped around the Frichez-Nous la Paix collective, a huge wall at the top of the street has been given over to these artists. The wall is a constantly evolving mural, with multi-coloured pictures and names now hundreds of sprayed layers deep. The fact that it is situated alongside the ever-popular Aux Folies café has certainly helped its renown to spread, and today the grafitti artists are performers for the crowds that constantly fill the café’s terrace. 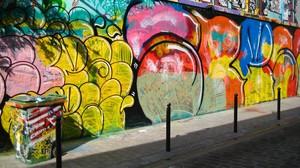 The street now resembles a souk with its succession of brightly coloured facades. “This is the real Belleville,” says one man, pointing out the dim and untidy interior of a shop unit. It seems to be a clandestine café, sparsely furnished with secondhand chairs and tables and with plastic bottles of Coca-Cola on the counter. The real Belleville? The building may have originally been situated in that town, but is it any more representative of Belleville than the Café des Délices?

Perhaps this street is in fact all of the Bellevilles. Chinese on the Rue de Belleville to one side, and African on the other Ramponeau side of the street. On the Boulevard de Belleville alongside, Tunisians and Algerians with both Jewish and Muslim ancestries have lived side by side for 50 years in a quiet and mutual respect. More recently artists and middle-class families have arrived, taking advantage of extra square feet at lower prices. The beauty of the Rue Dénoyez is that it belongs to no one but is shared by everyone. That, one hopes, is the real Belleville.

Adam Roberts has lived in Paris for so long that he has now managed to disappear. He runs the Invisible Paris blog which celebrates the parts of the city which would be refused entry to the ville musée today. He also creates self-guided walking tours of Paris that you can download and use for free.

City Segway Tours are great for seeing Paris in a different light. You’ll see more, have more fun, and not feel tired at the end of it. These are highly recommended and truly a great thing to do during your stay.

Fat Tire Bike Tours are another great way to see the city. You’ll get the company of an expert guide, the use of a super-comfortable bike, great tips and advice about what to do while in town and an exciting, informative and educational experience.

How Haiti and Napoleon led to Bonjour Paris—Sort Of