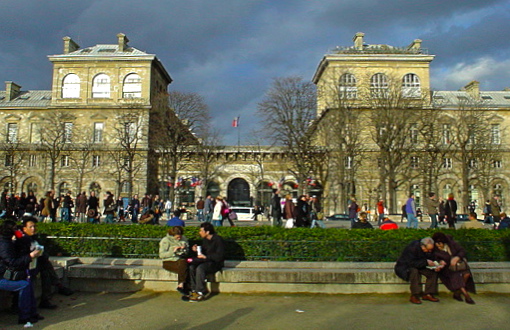 You are bound to visit the cathedral of Notre Dame during your first visit to Paris, and probably go back many times, as this is, unquestionably, one of the beauty spots of Paris. How about looking into some of its inside story, as described in Around and About Paris, Volume 1, in the chapter on the 4th arrondissement?

Hôtel-Dieu, the oldest hospital in Paris

This is part of the walk through the two islands: bordering the esplanade to the north is the Hôtel-Dieu, the oldest hospital in Paris and for centuries its only one. When it was built in the 12th century, it was situated on the southern side of the esplanade, from where it expanded gradually to occupy the whole area between the Petit Pont and the Pont au Double. The Bishop of Paris, Maurice de Sully, undertook its construction, at the same time as that of the cathedral of Notre Dame. This enterprising man was born into a very poor family in Sully-sur-Loire in 1120; in 1165 he baptised the Dauphin, the future Philippe-Auguste. 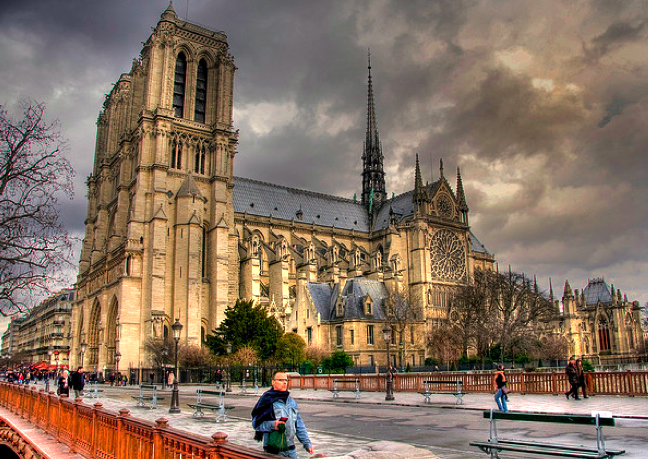 An earlier hospital and a chapel stood here back in the 9th century, both bearing the name of Saint-Christophe. They too must have been swept away by the Norsemen. Maurice de Sully ordered each canon of Notre Dame to contribute a bed to the hospital when he died, a welcome initiative at a time when five patients shared one bed, as was the case well into the 18th century. It was also only at this relatively recent date that patients were separated according to sex and disease. The hospital enjoyed the protection of the Crown and, when Philippe-Auguste left for The Crusades, he magnanimously offered the hospital the straw of the vacated horse stables as extra bedding. Saint Louis and his mother Blanche de Castille ruled that anyone in need be admitted, regardless of sex, nationality or religion, except those afflicted by contagious diseases. By this time, efforts were also being made to reduce the number of patients per bed to three, hence the sarcastic observation, “Each bed is shared by three—the ill, the dying and the dead.”

In the 17th century, the hospital expanded to the Left Bank, connected by way of the Pont au Double. Bridges were often built upon at the time, and the Pont au Double had a glass gallery, which served as a promenade for the patients. A narrow corridor for pedestrians ran along the hospital premises, allowing Parisians to cross the river for the price of a double farthing, hence the name of the bridge. The hospital was moved to its present location during the radical transformation of Paris at the time of the Baron Haussmann.

And now for Notre Dame. The cathedral is all the more venerated by visitors as they believe it to be one of the oldest standing vestiges of medieval Paris. However, most of what you see is the work of architect Eugéne Viollet-le-Duc, dating from the 19th century only. Many of the cathedral’s treasures were simply done away with because they were no longer in vogue, notably the gorgeous chancel screen, the high altar and the tombs, all of which disappeared in 1699. In the middle of the 18th century, the fabulous 13th-century stained-glass windows were replaced by plain glass so as to bring in more light, but some of the original glass of the two rose windows is still there. The one on the western façade was studded with gold stars against two angels, each bearing a chandelier. On the night of Sexagesima, the chandeliers would be lighted with candles and all the priests of Notre Dame in their cassocks would gather on the parvis to sing litanies throughout the night.

Whatever was spared over the generations hitherto was looted and profaned during the French Revolution. The bare, dilapidated edifice that remained standing was dedicated to Reason and the esplanade became known as Le Parvis de la Raison. When Napoleon I chose this symbolic shrine for his coronation in 1804, the walls had to be draped with hangings to make up for their bareness. That they were standing at all was a miracle, for the cathedral had been earmarked for demolition and put up for sale. A potential buyer had even been found, the ‘Citoyen Simon’, Claude-Henri de Rouvroi Saint-Simon by his previous name, a member of the same family as the duke and writer of memoirs and the count who would inspire the utopian Saint-Simonian sect a few decades later. Fortunately circumstances prevented the sale of Notre Dame from proceeding.

By the early 19th century the Romantic movement had aroused a growing interest in medieval values and a revival in taste for the Gothic, which had been spurned only recently. Victor Hugo undoubtedly deserves most of the credit for bringing the plight of Notre Dame to the attention of the public in 1831 through his novel The Hunchback of Notre Dame. At his instigation, a temporary restoration committee was set up by the poet Alfred de Vigny, the painter Ingres and the Catholic politician Montalembert. 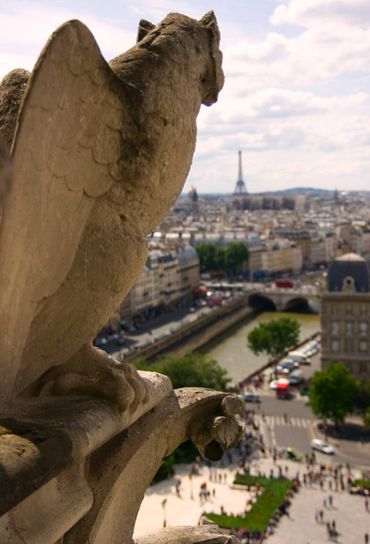 A competition for a contract to restore the cathedral was launched in 1844 and won jointly by Viollet-le-Duc and Lassus, but the latter soon died and Viollet-le-Duc alone remained in charge of the colossal enterprise. A past master in the art of restoration, his conception was, however, that restoring “does not mean maintaining a building. It has to be re-established in a complete state that could never have existed before.” Thus the southern side of the cathedral, with the sacristy and guard’s house, is typically 19th-century and the dainty steeple, together with its profusion of graceful floral designs, was ‘homemade’ by Viollet-le-Duc. However, the gargoyles and the other statues on the walls all have a medieval appearance, as does the “Gothic” furniture inside, most of it designed after old drawings.

Restoration work finished in 1864 and the cathedral was consecrated on 31 May. By May 1871 it was again under threat. ‘The bloody week’, the climax of the civil war of the Commune, began on 24 May: all the benches and barriers were piled up in the centre of the nave and sprayed with petrol. The house doctors of the Hôtel-Dieu were alerted just in time to rush in and extinguish the fire. It seems that Adolf Hitler too intended to destroy Notre Dame to mark the end of his occupation of the coveted city.

As you approach the western façade, try to picture the polychrome statues of yore, standing out against a background of gold. Twenty-eight statues are lined up above the three portals, representing the 28 kings of Judah. These are reproductions of the original medieval statues, smashed by the Revolutionaries who mistook them for the Kings of France, an understandable confusion shared by the inhabitants of the 15th century. Indeed, an engraving from that time represents two passers-by admiring what they take to be statues of Pépin le Bref and Charlemagne, while a shrewd rogue takes advantage of their absent-mindedness to steal their purse. 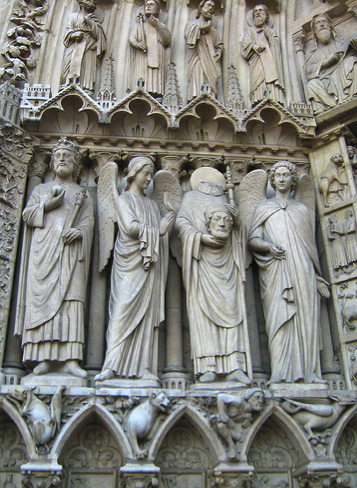 The Kings of Judah are celebrated because Jesus descended from their dynasty; nevertheless, the church’s traditional animosity to the Jews is also evident: engraved on the stone under this row of statues is the defeated Synagogue, characteristically blindfolded, with the triumphant church standing on her right (on the viewer’s left).

There is no doubt that Notre Dame was meant to please the ear as well as the eye, and its two medieval towers resounded to the peals of many bells. All the seven bells of the northern tower were melted down during the Revolution. In the southern tower there were two huge bells —Marie, likewise gone, and Jacqueline, which as survived, a gift to the Lord from Jean de Montagu for having blessed his wife Jacqueline with a daughter. When the bell was brought down to be alloyed with bronze, during the reign of Louis XIV, the ladies of the kingdom are said to have brought along their own jewelry to be melted down at the same time: this, according to some, accounts for the purity of Jacqueline’s peal.

Thirza Vallois is the author of Around and About Paris, Vol. 1, 2, and 3. The updated digital edition is available at her website.

The Deux-Iles Hotel is a 3-star hotel with just 17 suites located on the quaint, historic Saint-Louis island and near Notre-Dame, Saint-Germain des Prés and the Marais. Suites were recently refurbished and decorated with modern comforts; air conditioning and free WI-FI. More details at our partner, Booking.com, a Priceline company with a price guarantee: if you find the room for less after you book, Booking.com guarantees to match the rate: Hotel des Deux-Iles

On July 14, 1789, a mob of angry Parisians stormed the Bastille and seized the King’s military stores. A decade of idealism, war, murder, and carnage followed, bringing about the end of feudalism and the rise of equality and a new world order. THE FRENCH REVOLUTION is a definitive feature-length documentary that encapsulates this heady (and often headless) period in Western civilization. The highly-acclaimed DVD The French Revolution by the History Channel is available from Amazon.com at our French Marketplace.