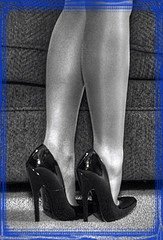 There are no dowdy women in Paris.  No frumps either.  A Parisian can say a woman lacks élégance or she is mal habillée, but these are roundabout ways of getting to the point, and the point is that the French do not have the precise words because they don’t need them just as Aleuts do not need a word for pyramid or fondue pot, but lots of terms for snow.

You can walk anywhere in Paris and see women who are not, as they used to say, put together with two pins or perfectly dressed and made up from the roots of their hair to their toenails.  But the odds are that a woman walking along in Paris who needs a visit from Mr. Blackwell is not a native of the city and more likely than not is a foreigner.  I have see parisiennes with the wrong scarf or a hair color that may not exist in nature outside the Amazon or the Marianna Trench, but these are, I’m pretty sure minor caprices, even eccentricities, and rarely the result of unredeemed bad taste or lack of a mirror at home.

In other great cities, this is not the case.  To walk the streets of New York or London or Berlin is to wonder if women are making themselves up in front of mirrors salvaged from the fun house or if their budgets permit them only to buy their clothes at discount and sight unseen, as if  from a grab-bag, or if they go shopping blindfolded.

I think I know why this is.  Paris, I am convinced, is the one city where women do not dress for other women.  Elsewhere, women assume that men have no appreciation of a woman’s appearance and panache, so they throw themselves on the untender mercies of other women, the idea being that you can impress with “originality,” if that is the right word, even if you haven’t a clue what becomes you.  Such women dress for favorable comparisons to the images in fashion magazines which are produced by women and men who have in common a huge loathing of women except for models or those famous for being famous.

Parisian women have not bought this idea.  It is not because the air they breathe is any different from the air anywhere else (and, anyway, foreign women in Paris breathe the same air without the same benefits).  They are different, and always stylish, because they dress for men, and the men, despite assumptions to the contrary elsewhere, are paying attention to what the women are wearing, can tell chic from cheap, and appreciate style.  And that, I believe, is because both women and men in Paris prefer style to fashion.

Fashion is what someone else tells you to wear without bothering to look at you.  Style is what you choose for yourself because you know yourself—and own a high-class mirror.  The former is to dress blindfolded, and the latter to dress with the eyes wide open.  You can see women in Paris whose clothes would seem so last year—or even last century—to a fashionista, yet who turn the head of every man they pass on the sidewalk and don’t care if another woman notices or not.

They are confident because they know that style is sex: not the sex of lust, or of an invitation to the easy pick-up, or of the artful if unconvincing sexiness of the model with the half-closed eyes, the half-open mouth, and the plump, pouty lips.  Parisian style is the sex that says, you could be my lover, even if that won’t ever happen.  It is the sex that speaks from femininity to manhood without needing an interpreter, a go-between, or a bottle of wine.  It is the sex of Coco Chanel’s little black dress that reveals what its wearer wants to reveal, looks right in any light, and promises to fall to the floor with the slip of a hook or the slide of a zipper.

And all that possibility, all that promise, is in the streets of the city every day in broad daylight and under the stars for all to see and enjoy without any shame, hesitancy, or looking back.  No wonder we stay go out early and stay out late in Paris.

Wake up! Look up! You’re in Paris!