Home Archives The Nectar of the Goddess Demeter 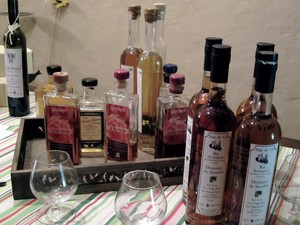 The heart of Gascony produces the oldest brandies in France.  Its vineyards, inherited from the Romans, have been in steady production since the middle ages. In the past, Armagnac was consumed for its therapeutic properties.  In the 14th century, a cardinal named Prior Vital du Four proclaimed its many virtues.

“…It makes disappear redness and burning of the eyes and stops them from tearing.  It cures hepatitis, gout, cankers and fistulas by ingestion, restores the paralyzed member by massage and heals wounds of the skin by application. Taken in moderation, it enlivens the spirit, recalls the past to memory, renders men joyous, preserves youth and retards senility.  And when retained in the mouth it loosens the tongue and boldens wit…” 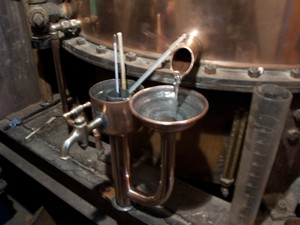 In 2007, researchers from the University of Bordeaux suggested that Armagnac does indeed have health benefits derived from its unique distillation process, rather than from its alcoholic content, finding that moderate consumption can help protect against heart disease and obesity.  The southwestern area of France has some of the lowest cardiovascular disease rates in the world.

Armagnac has been carefully cultivated for generations.  The production area, some 40,000 acres, is divided into three growing districts in the departments of the Gers (Bas Armagnac)the Landes (Armagnac Ténerèze) and the Lot-et-Garonne (Haut-Armagnac). All three areas have carried the Appellation d’Origine Contrôlée certification since 1936, which attests to and regulates its quality. In France, under this certification, it is illegal to alter wine by artificial colors and flavorings or chemical preservatives.  The grapes also have to be able to survive on their own without added water or the use of chemical pesticides.

The Armagnac region was one of the first in France to begin distilling spirits. The brandies produced here have a lower profile than those of the Cognac region and the overall production is smaller.  For the most part, Armagnacs are made and sold by small producers.  Armagnac is distilled once, whereas Cognac is distilled twice. Long aging in oak barrels softens the flavor and creates its rich amber color.  When the Armagnac reaches a 40% alcohol content it is transfered to large glass bottles, called Dame Jeanne, for storage.  From then on it does not age nor does its taste develop any further.  Like Cognac, Armagnac is sold under different classifications. A VS is a mixture of various Armagnacs that have been aged for a minimum of two years.  A VSOP is aged for at least five years and an X0, six years.  Hors de àge Armagnac refers to the youngest part of the blend that is at least 10 years old.  Older Armagnacs are sold by vintage dates denoting a single year.  Once open, a bottle of Armagnac will remain drinkable for years. 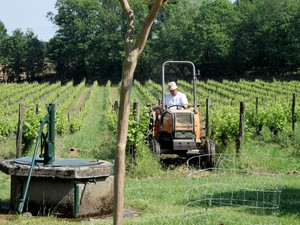 On a hot, white gold Gers afternoon, I visited Domaine de Saoubis, just down the road from where I live, 130 kilometers south of Bordeaux.  I walked into the gravel courtyard and rang the bell next to cerulean blue French doors. No one answered.  I noticed a small, faded post-it note adhered to a pane of glass, with a telephone number written in black ink.  I called the number and a man answered, “J’arrive!  J’arrive!” A few moments later I heard the sound of a tractor and followed it to the vineyard next to the house.  From the far end of perfectly delineated rows of Armagnac grapes, an old red tractor driven by Maurice de Mandelaire, son of Raymonde de Mandelaire, matriarch of the Domaine de Saoubis, lumbered towards me. Stepping down from the tractor, he greeted me warmly. We walked back to the tasting room and he opened the locked door. I followed him inside.  The space was cool and dark. I told him I had heard of the winery, its reputation won by being the only bio-dynamic, Demeter (goddess of the harvest) certified Armagnac winery in the region.  He explained to me that bio-dynamic agriculture is a method of organic farming that emphasizes the holistic development and relationship of soil, plants and animals as a self sustaining system and the harvest is done by the cycles of the moon.  Maurice said the distillation happens at the end of October after the first pressing of a variety of grapes: Ugni Blanc, Colombard, Folle Blanche and Baco Blanche. They use an alembic still made of copper, fired by wood that is constantly fed for five days and nights. As soon as the Armagnac is distilled it is aged in 400-liter oak barrels.  He invited me back in October for a tasting directly from the still.

During a fascinating conversation which covered American and French politics, I tasted four different Armagnacs, each generously poured into a brandy snifter.  Maurice said I should hold the glass in my cupped hands to warm it, releasing the scents of fruits, flowers and spices, the distinctive flavor of each year.  Next I sampled one of their newest products, Dame Douce à la Rose, which tasted like the nectar of the goddess Demeter, herself.  Each bottle is made from 9,000 organically grown rose petals from Germany and is the color of finely crushed garnet stones.  I could feel the warm glow of the spirits inside and knew I had reached my tasting limit.  After I purchased a bottle and was ready to leave Maurice said, “You have become part of our long history.  When you drink Domaine de Saoubis Armagnac time stands still.”