Second round of autumn/winter 2014 collection presentations at Men’s Fashion Week last month in Paris left us wanting more. More of the inspirations and more of the unexpected. We were sneaking around narrow streets with daylight vampires, got recreated with some joggers at Galliano, enlightened by a touch of neon and read a Songzio’s version of “50 shades of black”. Following Henrik Vibskov was the much anticipated John Galliano fashion show. Since the unglorified resignation of the brands name holder, head designer and founder John Galliano himself the new creative director Bill Gaytten took the brand into a new direction. For the new season the inspiration came from the Parisian number one sport – jogging. Men are wearing leggings and running sneakers combined with long shirts and blazers for an after sport activity. The collection is very youthful, doesn’t save with color and includes prints that create movement even when the models are running at a slow paste.

Next on the schedule was the Songzio show held at Espace Wagram, which was packed with youngsters trying to get their foot through the door. At one end of the runway a big mountain sculpture at the other countless cameras. The South Korean brand, run by its owner and designer Zio Song, presented a collection that could also be called “50 shades of black”. Shiny Black, leather black, metallic black, patterned black, polished black and soft black. The shape follows the trend and is very loose if not inflated. The only exceptions to that were the tuxedo look and a tailored jacket. It seem that designers across the globe all think alike and the new silhouette for the fall season really is taking over the slim-fit trend.

Tilmann Lauterbach was the only show I attempted and successfully crashed and I was glad I did. The show started with some strong German beats followed by sharp design that was obviously inspired by his German roots. Although the collection was very clean in lines and some pieces suggested harsh conservatism there were also outbreaks of bright color. The neon orange and sporty details were like a ray of sunshine in the otherwise pretty gloomy landscape. It was a much needed detail, placed in the collection wisely as a breath of fresh air. It kind of left us wanting more, which is the intention anyway now is it? 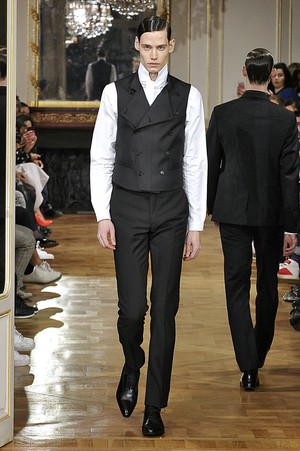 Day 4 at Men’s Fashion Week concluded with the presentation of Icosphere at the beautiful Hotel de Poulpry. Their autumn/winter 2014 collection is as timeless as it is modern. It’s hard to be innovative when your brand is all about classic evening ware but despite that the clothes looked very current. It’s the details like high collars, slim lapels, rounded shirt collars, double breasted vests with Russian collars, tying and bows instead of the classic collars that made it fresh. All the attention was at the neck of the models. The overall look took us to the aristocracy that didn’t quite seem from this era but had some vampire poise in them. I would very much like to see these models in the darkness of narrow Parisian streets.

The Westin hotel has to be one of my top 5 venues at Paris Fashion Week, so naturally I was very excited about the Rynshu show. Having the view of the front row seat made me enjoy the show even more and on top of all that there was a special treat for all of us galls. Rynshu could be the Icosphere`s younger brother, dark, even gothic at times and rebellious as the younger siblings usually are. According to Rynshu next fall will be covered in small metal detail, from zippers to safety pins. It will also shine brightly in glittery blue patterns and silver wash out prints. The girls are walking to the same tune. They’re just as badass as the boys. This time the silhouette is very sliming and accompanied by hot accessories like studded boots and dark shades. Great look to create some distance. 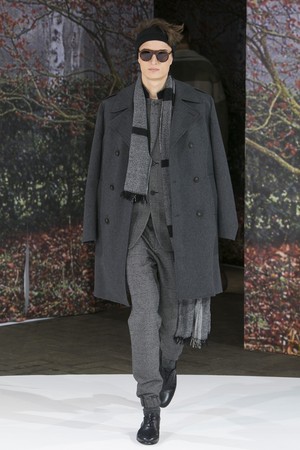 Melinda Gloss was my last and final show for the autumn/winter 2014 season. The collection was shown on a round shaped runway at Galerie Durand-Dessert with an autumn forest for the backdrop. In spirit of those colors was the collection that took us on a little trip. Maybe to a ski resort in French Alps or a nice bed & breakfast somewhere in the countryside. Whatever the destination the clothes would ensure to keep us warm while not making us leave our sense of style at home. It was the perfect combination of casual and chic.

While visiting Paris is always a delight whether it’s business or pleasure, Fashion Week can leave you a bit exhausted. Armed with new runway inspiration as well as empowered by the city itself I was ready to leave Paris and prepare myself for what was the beginning of a long fashion month. Starting with Haute Couture Fashion Week that followed the very next day.