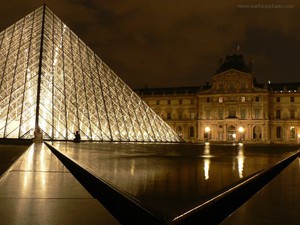 Happy New Year to you all! As 2010 comes to a close I would like to wish each and every one reading this column and sending in great emails throughout the year a fantastic 2011! It is a pleasure to put the Events together and share all the happenings with you each month.

If you are headed to Paris in January, or lucky enough to live here already but have been stifled getting tickets to the Monet exhibit at the Grand Palais, you are in luck! The Grand Palais will remain open and operating 24 hours a day from 9am on Friday, January 21st, to 9pm on Monday, January 24th. Currently this show is not being extended so I can think of nothing more lovely than a fabulous dinner, a lovely bottle of wine and a bit of Monet for dessert!

Again, a sincere thank you to all of you and may our paths cross in the coming year!

Created for the Opera Garnier in 2005 by Nicolas Le Riche, this ballet in five acts is danced to Vivaldi’s Four Seasons.

Handel’s opera, set in Egypt 48 B.C., is the consummate Italian tragedy with themes of warfare, love and betrayal.

Tchaikovsky’s first and most famous ballet takes the Opera Garnier through the holiday season. The show runs through January 5th.

An opera buffa in four acts, this is Wolfgang Amadeus Mozart at his best.

A Japanese setting at the turn of the century, this opera tells the story of an American lieutenant and his young Japanese bride. This opera is considered to be one of Puccini’s most beautiful.

The best known work of Riccardo Zandonai, this opera is considered to be one of the best works of the early 20th century.

The Louvre in the Age of Enlightenment, through February 7th

Antiquity Rediscovered – Innovation and Resistance in the 18th Century, through February 14th

All Collectors!, through January 30th

France 1500, the Middle Ages to the Renaissance, through January 10th

Les Années 1990-2000 History of Contemporary Fashion, through May 8th

Vilac, 100 Years of Wooden Toys, through May 8th

Science and Curiosity at the Court of Versailles, through February 27th

In the Wake of Sharks, through May 8th

Henry Moore, The Studio Sculptures and Drawings, through February 27th

Monet-Rodin, Just the Two of Us, through January  30th

Larry Clark, Kiss the Past Hello, through January 2nd

MuseoGames,  A History to be Replayed, through March 13th

Kazakhstan, Men, Beasts and Gods of the Steppe, through January 31st

1, 2   Scooby Doo and the Phantom Pirates

26   This is the Hello Monster

The Festival of Kings

7 Every Friday night is open mic night (in English) for comedy at Pranzo.  Show starts at 9pm

8 Start off at the Eiffel Tower with one of three proposed distances to walk.  The walk starts at 3pm.

20 – 27 A week of haute couture, ready-to-wear and men’s fashion takes over the City of Light

12 Evenings with an Author: Annie Cohen-Solal

19 Evenings with an Author: Susan Tiberghien

11 Dan Chaon reads from his novel Await Your Reply – 7pm

27 Fatima Bhutto reads from her memoir Songs of Blood and Sword: A Daughter’s Memoir – 7pm

If you know of other special events in Paris, or if you would like to have your event featured in this monthly column, please send an email to Lisa at:  [email protected]

Your Paris Experience is pleased to offer the Premium Members of BonjourParis.com offer a 10% discount on the public price of all services.

Saint-Tropez and the Out-of-Season Riviera Experience