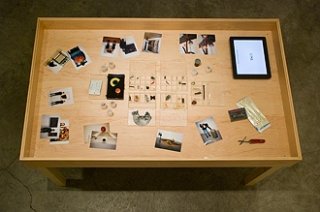 Just days before the latest heist of priceless artworks in Paris, I read about another type of art theft disguised as anti-establishment conceptual art. The Washington Post reported that the Postmaster’s Gallery in New York is currently exhibiting a controversial work entitled Stolen Pieces by Eva and Franco Mattes. Essentially this work is a collection of a dozen or so fragments stolen from major artworks around the world by the self-proclaimed artists. Tiny bits and pieces from works by no less than Koons, Kandinsky, Raushenberg and Warhol—to name a few—are encased under glass and marketed as art with a capital ‘A’.

The nerve! I don’t know what enrages me more—the thought of famous artworks being vandalized or the fact that the art establishment is buying into, and encouraging, this farce. This is really an example of artistic chutzpah! What has the world come to? I guess I must be ‘old school’, having grown up in a time where one was taught that art in museums was for looking at, not taking home. Sure, I have experienced the urge to take something that does not belong to me, but that would be called ‘stealing’ and it happens to be against the law.

Last week’s multi-million-dollar heist of cubist and post-impressionist works from the Paris Museum of Modern Art does not constitute chutzpah. In my book it constitutes a tragedy. As an artist, an art lover and frequent museum visitor, I feel personally violated. I mean, Modigliani’s Woman with a Fan is one of my favorite paintings. But forget about me and my personal loss. This thief has robbed the world of something that cannot be replaced. When art is placed in a museum it essentially becomes part of the common wealth, not just the possession of an elite few. In our throw-away society, these five stolen paintings by Modigliani, Picasso, Leger, Braque and Matisse are truly one of a kind. Each and every one of these paintings represents a distinctive time in the history of Art when an individual artist shaped the future of our collective inheritance with his vision. The thief had taste, no doubt about it.

Scanning the headlines of Le Figaro and Le Monde, one senses the gravity of such a crime and the enormity of the blow to France’s “national patrimony”. Paris’ mayor Bertrand Delanoe pronounced that he was “saddened and shocked by this theft, which is an intolerable attack on the universal cultural heritage of Paris”. Admittedly, he could have projected beyond the boundaries of Paris, but after all, he is the mayor of Paris. Now switch to the comparative headlines and editorials in The Washington Post. I was literally incensed by the latter’s cavalier, Hollywood-film-in-the-making reportage on the art heist. If ever there was an example of cultural differences, this is one of them.

The front page article begins with the following introductory sentence: “In a brazen display of stealth, cunning and cool nerves, a thief using a sharp cutting tool opened a gated window and sneaked into the Paris Museum of Modern Art.” As if that wasn’t light-hearted enough, an editorial piece by Paul Farhi went as far as to ask “Is there a soul breathing who doesn’t also think: Man, how exciting!” Well, hello? Am I that one breathing soul left standing who does not think it is exciting? Farhi goes on to talk about the theft in terms of a “heart-pounding caper” and the “criminal nobility” of the perpetrators. I think Monsieur Farhi was confusing this tragic robbery, which left us bereft of some of our civilization’s most beautiful artifacts, with a movie review of the upcoming Hollywood rendition starring Brad Pitt.

To add insult to injury, this very same journalist had the gall to serenade the unknown bandit with the kudos “Chapeaus off to you, monsieur.” Ugh. Instead of taking our hats off in a show of adolescent idol worship, I suggest we put our thinking caps on and try to prevent these increasingly numerous art thefts from recurring in the future.

In a final demonstration of insensitive journalism this side of the Atlantic, another article in The Washington Post titled ‘Are U.S. museums safe from art thieves?’ goes to great lengths to ensure the public that our museums are newer, safer, and layered with security staff. The article finally quotes Robert Wittman, security specialist and author of How I Went Undercover to Rescue the World’s Stolen Treasures, as saying that the stolen French paintings “are worth nothing…without the ability to transfer the title”. I know what he means in terms of a painting’s market value, but he’s got it all wrong. They’re worth everything.

Mosaico World is a customer-friendly international ticketing service that enables you to book tickets for upcoming events in the City of Light and around the world.