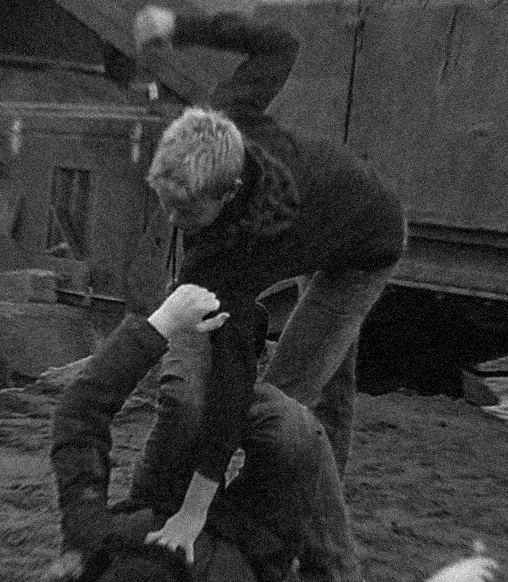 The noise rouses me as if I’ve been dumped out of bed onto the floor and I’m sitting there in my undies wondering what happened. But it’s after breakfast and I’m fully dressed: good thing, too, since I’m walking along the boulevard des Italiens at nine o’clock in the morning. But I’ve been daydreaming about a scene in a restaurant two nights ago, trying to figure it out. I could see two couples, not together but seated a little too close in the small restaurant, having dinner. The first couple was two gay men, the other a man and a woman. As I headed to my table, I could hear one of the men saying to the other, “Oh, so you’re reading Barbey?” and that was almost enough to put me off my feed. Maybe invoking Barbey d’Aurevilly, who wrote sadistic Catholic pornography—not as odd an idea as it seems—and was probably a fascist avant la lettre, was supposed to be arousing. Not for me. I sat down anyway: they told me the lamb was good here.

The couple next to them seemed ordinary enough, husband and wife to look at them, talking back and forth without much animation, but very interested in their food. The man had his back to me, so I have to guess what he was doing, but I know he was doing something because every once in a while the face of the gay man looking in my direction just fell, deflated, distracted from his companion who, I thought, was a first date. A disapproving look? A silly wink or a lip pout? The woman did not seem to notice, but the face-falling was pretty regular, every six or seven minutes. This is what I am puzzling out when the noise wakes me up.

It is a robust, angry tenor, loud enough to hear three streets in any direction let alone wake up a daydreamer, coming out of a wiry little guy who has been grabbed on his right shoulder by a bruiser weighing in at about ninety-five kilos, blond and blank-faced and silent. Fully awake now, I make out that the little guy is yelling Au secours, au secours!—but no one moves to help him, no yelling or asking what the hell’s going on even at a safe distance. The big guy, I think, might be reaching for handcuffs, but I can’t be sure—they are still about ten metres ahead of me as I run towards them and in the shadows of the marquee over the entrance of a store—but as he brings his other hand up, the little guy twists to his right, ducks, pushes himself off the ground with his hand, and bounces up just out of the reach of his hunter.  The bigger man has the surprising agility of a heavyweight boxer and nearly catches him, but not quite as the smaller man dodges, tacks, jukes, and zigs in four directions in about as many seconds, then without looking out for cars or bikes—which can be almost as fatal—bolts across the boulevard.

So often it’s the dopey, trivial thing that snags the attention, that sinks in and stays—some upstage business stealing the scene and distracting you from the plot. My first recollection of this scene three seconds after both actors have left the stage is that I did not hear brakes squealing and gnashing when the little guy ran into the street, no one telling him he’s an idiot and do you want to die, crétin? There should have been something, a cinematic near-miss, people calling out warnings, horns honking: nothing. I turn back and the big guy is gone. I thought he’d be standing on the curb, annoyed that the man he wanted to capture had escaped and vanished, but he had done the same.

I ask a man passing near me what he made of the scene just played in front of us. Quelle scène, monsieur, quelle comédie? He hadn’t noticed anything, no, not a cop trying to catch a crook or a gangster roughing up a victim or someone making a movie, as I suggest, hoping for the best. What about the man darting into the street without looking—and not getting run over? Did someone do that? He was lucky he wasn’t killed. I looked around and everyone I saw was going about his business, no excited talk—to which the Parisian is devoted when something extraordinary happens—no gestures, no pointing, not even well-what-do-you-expect shrugs, leaving only me perplexed, more perplexed by the absence of reaction than by the drama I have seen and that has made no sense to me.

Maybe that’s it. The scene I saw was not imaginary—too early for an excess of Bordeaux, too much coffee to be physically somnolent as I walked wool-gathering along the street, too there-in-front-of-me. But I seem to be the only witness—or the only person willing to admit to being a witness. Perhaps seeing the scene and admitting to seeing it would undermine the idea—and it’s generally a sound one—that Paris is safe.  There are pickpockets and shoplifters—though not so many that the stores make you feel like a criminal with cameras, gates that look like bomb-detectors, and people scanning your receipt and checking it against the contents of your cabas on the way out. But street-fights, muggings, and assaults don’t happen as casually as they do in American cities. You’d think, you certainly would, that a big man roughing up a smaller one would attract attention, even if no one wanted to get into the thick of it: the big guy was very big and, who knows, could have been a cop, and messing with cops is always a bad idea. But you’d look, wouldn’t you? Especially in a city where this is a rare event. You don’t get your head cracked open here, you walk home late through quiet streets unconcerned, and French doesn’t even have a satisfactory way of saying I got mugged. But a fight in broad daylight? You’d notice, you wouldn’t look right through it, you’d want to remember it so you could astonish all your friends for days with this incredible story: imagine something like that, nine in the morning, on les Italiens, no less, I saw it with my own eyes, and what do you make of that?

But if you see no evil, there is no evil. It was Balzac, wasn’t it, who said, “Ça rime, ça met la conscience en repos.” Sure, if it rhymes, if it somehow fits right in, it puts the conscience to rest, and nothing can be wrong. No evil, not even mean spirits: see nothing—like the woman in the restaurant who appeared not to notice that her husband, or whatever he was to her, was tormenting the young gay man with the literary bent sitting no more than an arm’s length from her right elbow. What do I make of this? Nothing? There must be something, and I know I saw it on both occasions. I give up and head off, trying for the life of me to remember where I was going in the first place.

Please visit our Amazon affiliate store for your shopping. Bonjour Paris has hand-selected some of our favorite travel gifts and gadgets for our readers… plus many Paris- and France-related books for children, travelers, scholars, and dreamers.