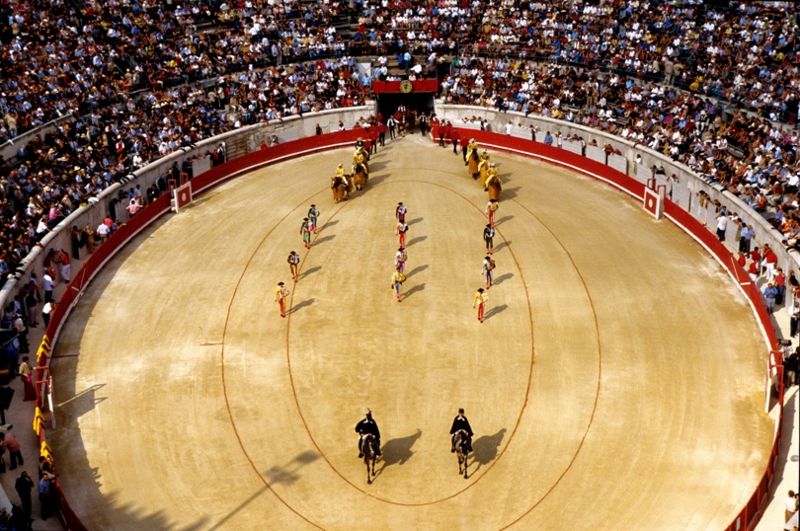 Easter is Feria time down here, with bullfights in the Roman arenas of Arles and Nîmes. These are the traditional corridas where bulls are killed, with picadors on horseback, matadors in their “traje de luz” and all the ancient rituals. For three days in a row, these corridas draw the usual aficionados and tourists, and fill the streets with enormous copper pans of paella and trumpet music and paso-doble dancers.

It’s a world removed from the Tienta, a less well-known event which takes place on Easter Monday morning in the village of Fontvieille. A tienta is a test of young cows that are selected to be bred with fighting bulls. They are challenged with the cape and the muleta to test their agility and their fighting spirit, but no blood is spilled. The public is not exactly the Hemingway crowd. Rather, these people come armed with baguettes, sausages, paté, cheese and lots of wine to be entertained while they eat. Bread and circus, as of old. An occasional muffled “Olé” escapes a sausage-stuffed mouth, but nobody gets too excited.

The breeders are the only attentive ones, and they may even take their cow through a Veronica themselves. It’s fun in the sun, even for the animals. For most of them, that is, because the very first cow died of a heart attack. She had all the right moves and the required fighting spirit, but she didn’t know when to stop. Apparently, young animals sometimes get so excited that they blow their fuses, so to speak. When this cow went through her knees and would not get up, they threw a bucket of cold water in her face – just like in the boxing ring. Then the “experts” gathered around and soon someone was doing a heart massage, but to no avail. The pick-up truck hauled her out of the arena, to applause, and the breeder took a loss.

On to the next cow, until 24 of them had been tested. The “bullfighters” were a varied lot, including one boy who seemed no more than 12 years old. He was being coached by his father from the sidelines with shouts of “Au museau!” (to the muzzle!) and “Ne recule pas!” [Right, dad, why don’t YOU come down here?] But the kid did just fine, as did everyone else that day. After the last cow, the mayor invited all present to come and have a drink in the arena to celebrate the 25th anniversary of the local Tienta, and we were offered pastis, vermouth and whiskey (!). The whiskey may have been in honor of Peter Mayle who has brought hordes of Brits and others to Provence. Who knows? Anyway, it was an unusual touch.

From cows to bulls is but a small step, and this being Easter Monday we decided to take the short drive to Arles and see if we were ready for the real thing. After all, in our six years down here we have tried to do as the locals do, and it was time to take the bullfight plunge. Tauromachy is alive and well in Provence and of all the places where corridas are still being performed. Arles is the undisputed leader, where some of the big names from Spain come to fight before a well-informed public. There are two bullfights a day for three days and Arles goes completely mad, with non-stop music in the streets, food stalls (paella), bodegas for wine, beer and pastis everywhere, and special photo-filled newspapers every day. The party goes on until dawn every day and doesn’t stop until Tuesday morning when – somehow – most people get back to work.

As for the corrida we saw – all right, I’ll say it – it was beautiful. To see the ritualistic pageantry of the magnificently dressed toreador and his entourage of banderilleros, picadors on horseback and assistants carrying capes advancing slowly toward the President’s box in the huge Roman arena that fairly oozes ‘Christians and lions’ is to be awed by the sheer beauty and solemnity of the moment.

And once the trumpet music stills, the helpers withdraw behind barricades and the toreador finds himself alone in the middle of the arena, in total silence, ready to face a ferocious animal with no more than a piece of cloth, you tense in your seat and scream “Olé!” when he swirls the bull around him without giving an inch. If you saw Almadovar’s movie “Talk to Her” you know what a mad bull looks like up close and you shudder. Luckily, our corrida was a good one with two of the three bullfighters getting two ears each, but not without a tremendous ruckus and a sea of white handkerchiefs and thumb-downs from the stands when the public disagreed with the presiding judge awarding only one ear when two were considered appropriate. This was a ROMAN arena, after all.

Anne-Marie Simons has worked as a translator, teacher, journalist, sportswriter (covering Formula One races) and director of corporate communications. Now happily retired, she lives in the south of France. Anne-Marie Simons is the author of Taking Root in Provence.