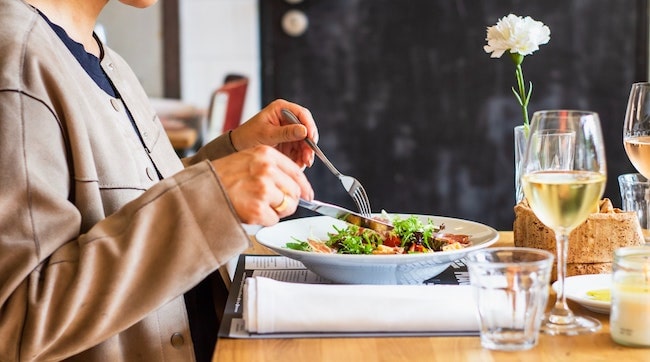 For the uninitiated, dining in Paris can be a daunting experience. Images of snooty waiters and the fear of fumbling through a French menu is enough to give even the most assured traveler cold feet. Just follow the suggestions in our dining guide and you’ll be dining like a native.

Café, bistro, brasserie, or restaurant…which one is right for you?

Cafés
The café is an everyday part of Parisian life. Cafés are the place to go for your morning coffee and croissant, to have lunch or a mid-day snack, or perhaps an apéritif in the late afternoon. You can order as little or as much as you want and are welcome to stay for as long as you’d like.

Most cafés offer a simple menu that can be had at any time of the day; so if you’re hungry during off hours, then this is the place to go.

If the café is also a tabac, you can buy cigarettes, phone cards, stamps, and lottery tickets.

Know that having an espresso while standing at the bar will cost you considerably less than having it at a table. Sitting on the terrace will cost you the most—think of it as renting a piece of prime real estate for an hour or so. If the table has a placemat and silverware it is designated only for those customers who are eating; if the table is bare you are welcome to sit and have only a drink.

The café is the one place where the waiter will bring your check immediately, but this is not a signal to pay. You may pay whenever you are ready to go. Service is included in the bill, but it is customary to leave the small change for good service.

Bistro
The word bistro is said to have originated during the time when Russian soldiers occupied Paris . These impatient soldiers would call “Bistrot!”, which means hurry in Russian, and soon these simple eating establishments became known as bistros.

A traditional bistro is usually a small, mom-and-pop type establishment serving hearty portions of typical French food. Menus are frequently written on the ardoise (blackboard), wines are often available by the glass or carafe, and the décor is normally quite simple. Bistros are
often lively and jam-packed; so don’t be surprised if you end up sharing your table with your neighbor.

Today’s bistros have evolved, however, and many of France ‘s best chefs have opened “baby bistros,” casual, less expensive extensions of their pricier establishments, where you’ll find contemporary décor and modern cooking.

Brasserie
The word brasserie is French for brewery. Paris’ brasseries were originally owned by Alsacians and served huge platters of choucroute, sausages, and freshly made beer. Brasseries tend to be large and lively and are a smart choice with a group of friends. Many are open late and serve food continuously throughout the day.

Restaurants
Restaurants in Paris run the gamut from casual to haute cuisine. A restaurant is the place to come for a full meal, which will often consist of several courses. To save money, opt for the “menu,” which offers several courses at a lower price. You can also opt for having lunch, rather than dinner, when prices tend to be lower.

Dining Hours: Don’t expect to have a quick meal in Paris, especially in a restaurant. Count on an hour to an hour and a half for lunch and two to three hours for dinner. Dining in France is an experience, and you will never feel rushed. If you must have something quick, go to a café, wine bar or brasserie—never a serious restaurant.

Paying the Bill: In France you will never be brought the check until you ask for it, as they don’t want customers to feel rushed. Just ask for l’addition or use the universal signal for the check—the motion of writing out a check in the air.

Tipping
Service is included, by law, in all French restaurants bills. Unlike in the United States, however, where waiters live mostly off tips and receive very low wages (less than the minimum wage), waiters in France are normally paid a fixed income, which is either an hourly wage or a monthly salary. Waiters in France are also given health care, paid vacations, and retirement benefits; the service charge is used to cover these salaries and benefits. Some restaurants still include a 12-15% service charge that goes directly to the waiter, but most restaurants nowadays favor the salary system.

According to Where magazine, waiters in France make anywhere from 15,000 (in more casual restaurants) to 50,000 (in the Michelin-starred establishments) Euros per year.

Since service is included in your bill, you are not required to pay one centime more and shouldn’t if service is poor, but most people leave a few extra Euros for good service.

A good rule of thumb is to leave the small change in a café, say .20- .50 centimes and then a few extra Euros for dinner. Depending on the service, 1-5 €, per person, is appropriate.

Breakfast
Breakfast in France seems rather meager when compared to a traditional American breakfast. Typically, a French breakfast includes a tartine (bread and butter), croissant, or possibly a pain au chocolat (a croissant filled with chocolate). If you like coffee with milk, ask for a café crème (coffee with steamed milk) and if you like just plain coffee, ask for a café (an espresso). If you would prefer an American style coffee, you’ll have to ask for a café allongé or Americain, which is a weakened espresso. For decaf coffee just ask for a déca. For orange juice, you’ll ask for an orange pressée, fresh squeeze orange juice, which is often served with a pitcher of water and sugar to be added to your taste.

Lunch
In many parts of France, lunch is still the biggest meal of the day. In most restaurants, the menu and cuisine is the same for lunch and dinner. Many restaurants, however, offer a lower priced prix fixe menu at lunch that is not available in the evening. So, lunch can be a terrific value.

Dinner
Dinner might start out with an apéritif, which is often a kir (white wine with cassis). In a more upscale restaurant you may then be served an amuse bouche, a little plate of appetizers served with your apéritif. The next course is the entrée (appetizer or starter), then the plat (main course). Cheese is always served after the main course and is eaten with bread and butter. Next comes dessert and then coffee. In France coffee is always taken after dessert, as it is considered a separate course. It used to be that the waiter might give you an odd look if you ordered coffee with your dessert, but these days even the French are ordering their coffee with dessert, but you must ask for it this way—it will not be served automatically. It is customary to have a café (espresso) after dinner, but you may have a crème (coffee with steamed milk) if you prefer.

• Don’t order a Coca (Coca Cola) with dinner.
• Don’t try to re-arrange the menu to suit your desires. If you don’t like the sauce and side dish that goes with the salmon, then order something else. French chefs take great pride in their creations and don’t like to accommodate the whims of customers—unless, of course, you have specific dietary concerns or allergies.
• Don’t ask for a doggie bag. The French might love their dogs, but doggie bags are unheard of in France.
• Don’t be afraid to put your bread on the table if you don’t see a bread plate.
• Don’t expect to see large glasses of ice. If you ask for ice you’re likely to be given just one or two cubes because the French don’t normally serve drinks with ice.
• Don’t be surprised to be surrounded by smoke. France still has a long way to go to combat smoking in public places. If smoke is an issue, we suggest dining early when you’re likely to be surrounded by other non-smoking tourists, rather than French customers.
• Do speak softly to your neighbor (especially if you don’t want to get dirty looks)…English speakers tend to speak much louder than the French and their voices carry.
• Do dress up. The French are becoming more and more casual and it’s not necessary to wear a jacket and tie, but most Parisians are still dressier than Americans. Casual is acceptable, but sloppy is not.

Previous Article How to Use Public Transit in Paris: Metro, Bus, RER, Taxi
Next Article Tipping Etiquette in France